Researchers from Prof. Liqun Luo’s and Prof. Karl Deisseroth’s groups at Stanford University have identified a subset of neurons in the median preopticnucleus of the hypothalamus (MnPO) that encode the survival drive to drink.

Published in the journal Science, Allen et al. show that the drive is so powerful that if they activate the neurons in satiated, non-thirsty, mice they can drive them to drink. Furthermore, if they silence the same neurons in mice that have been water-deprived for 48 hours they can prevent them from drinking.

When asked why the researchers wanted to investigate the area of the brain that encodes thirst, Will Allen explains, “Thirst is an extremely powerful motivator of behavior, and a very ancient homeostatic system that is poorly understood.”

In fact, thirst is exploited by many labs as part of their behavioral experiments.

As Will further explains, “We and many others use water deprivation to motivate animals to perform operant tasks, and we wanted to understand the basic circuitry that causes animals to learn arbitrary tasks for water reward.”

Thirst is encoded by a small number of neurons

The researchers identified just 176 neurons in the MnPO as being the drivers for the thirst-quenching survival behavior. But, the act of finding them was not a trivial task.

The area of the brain in which the MnPO sits is called the lamina terminalis of the hypothalamus. It has previously been implicated in water intake in mammals.

As Gizowski and Borque describe in their perspective on the paper in the same journal issue, the MnPO sits between two nuclei, the subfornical region and organum vasculosum lamina terminalis. These regions are involved in driving thirst by sensing decreases in blood volume and increases in blood salt concentration, respectively. So, the MnPO is well placed to be involved in actioning the behavioral drive to drink.

However, as Allen et al. state in their paper, the MnPO is also involved in regulating body temperature, sleep, cardiovascular function, and body salt concentration. It is made up of different cell populations that could be involved in these different homeostatic processes. Therefore, picking out the cells specifically involved in signaling thirst has proved impossible, until now.

In order to isolate the cells involved in thirst quenching behavior the scientists used a genetically engineered ‘TRAP2’ mouse and subjected it to 48 hour water-deprivation. Cells activated by the water deprivation induced the activation of the Fos gene in their nucleus. This early gene is linked to increases in neuron excitability.

As Will explains, “In order to get robust TRAPing, we used a relatively long water deprivation period that we knew would cause maximal Fos induction.”

In the TRAP2 mouse, the activation of Fos lead to the production of Cre recombinase, an enzyme that cuts and recombines sections of DNA at specific sites.

However, the produced Cre recombinase is stuck outside of the nucleus, away from the cell's DNA.

Upon administration of tamoxifen to the mice, the Cre recombinase could move into the nucleus and perform its role, incorporating the gene for a red marker protein into the cell’s DNA. This meant the cells activated by water restriction glowed red, making them visible to the researchers. 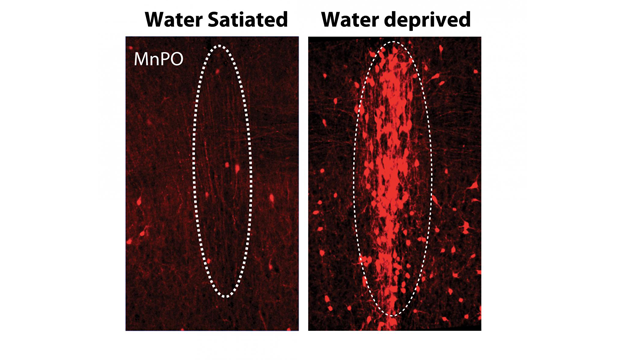 Investigating the molecular identity of the thirst neurons

By extracting red-labelled thirst neurons from the mice brains the researchers could perform RNA sequence analysis to investigate which genes were being transcribed and which were repressed, meaning they could identify the molecular identity of the cells and group them based on this signature. This transcriptional map is known as the transcriptome.

From analyzing the transcriptome data, the scientists discovered they had two clusters of cell types activated by water-deprivation. Further analysis revealed a population of excitatory cells that expressed a number of receptors known to be activated by hormones that signal times of drought, and so they focused on these.

Using their TRAP system, the scientists could access the thirst neurons and make them express one of two special channel proteins, gated by light. Depending on which channel type they expressed the scientists could use light to either activate the cells or silence them.

A mouse attached to a patch cord explores its arena and is induced to drink by flashing of the blue light. Credit: W. Allen et al. Stanford University.

Thirst is an uncomfortable reinforcer

Activating and silencing the neurons exhibited strong control of the motivational drive to drink. As the researchers state in their paper, classical studies of learning and motivation suggest that pushing an animal to its homeostatic limits, such as making it thirsty or hungry, or too hot or cold, is aversive. And the animal will perform motivated behaviors to reduce these uncomfortable states. The researchers investigated if activating the thirst neurons themselves was aversive for the mice, i.e. do the mice find activation of their thirst neurons uncomfortable?

They first placed thirsty mice in arenas where pressing a lever led to a drink, they found that the mice quickly learned to press the lever and received a drink from a bottle. Lever pressing diminished over time as the mice quenched their thirst.

To test if this quick learning was due to the aversive nature of active thirst neurons, they put a non-thirsty mouse in an arena and flashed light to activate its thirst neurons. They found the mouse quickly learned to press a lever that stopped the light flash, suggesting they found the activation of the neurons to be uncomfortable and aversive.

The group then activated the downstream terminals of the MnPO thirst neurons with light, which also induced drinking behavior.

Finally, the researchers used a fibre photometry approach to visualize the MnPO thirst neuron activity in response to water deprivation. They wanted to explore if their activity was silenced in anticipation of the reward of the drink, during the drinking phase, or after drinking behavior was initiated. They found that the activity of the neurons rapidly decreased within 1 minute of bottle licking to get a drink. The silencing coincided with getting water, as licking an empty bottle did not reduce neuronal activity, suggesting that MnPO thirst neuron activity is linked to water intake. They observed in real-time that the activity of the neurons diminished as the mouse quenched its thirst.

The future is goal-directed

This set of elegant experiments has shown for the first time that a relatively small number of neurons are responsible for signaling an aversive thirsty state that drives a motivational behavior important for survival. The drive to drink signaled by these neurons is dependent on the level of thirst, such that thirstier animals have greater MnPO neuronal activity compared to non-thirsty animals.

Looking to the future Will explained the next step for his research, “We want to understand the downstream circuits that translate this thirst signal into goal-directed behavior.” Adding, “We hope that using thirst as a simple model system will allow us to better understand the more general circuits controlling motivation that may be dysregulated in many psychiatric diseases.”

Complete the form below to unlock access to this Audio Article: "Neurons Encoding the Homeostatic Drive to Drink Found"