There are six variations or isoforms of the protein tau that exist in the brain and they are essential for maintaining the correct functioning of neurons. However, in neurodegenerative diseases like Alzheimer’s Disease tau proteins can misfold into insoluble aggregates or filaments. This misfolding has a dangerous domino effect and causes other tau proteins to assemble into filaments that eventually cause the destruction of neurons. The filaments don’t get degraded, but instead spread throughout the brain causing more tau proteins to misfold and more cell death and degeneration to take place. This neurodegeneration is a pathological hallmark of tauopathies.

How do we stop misfolded tau from wreaking havoc across our brains?

First we need to understand the 3D structure of the different tau isoforms. These tiny proteins are not visible under the light microscope and until last year the best structural evidence we had of these protein filaments was from work done by scientists in the late 1980’s early 1990’s using special negative stain technique and electron microscopy. 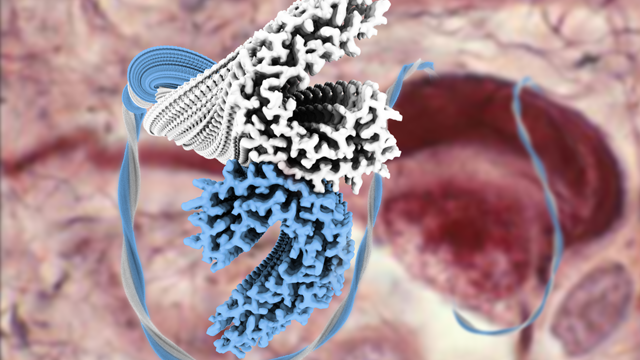 END_OF_DOCUMENT_TOKEN_TO_BE_REPLACED

Last year a collaboration led by Dr Michel Goedert and Dr Sjors Scheres, both group leaders at the MRC’s Laboratory of Molecular Biology, Cambridge, UK, used Cryoelectron Microscopy (Cryo-EM) to vizualise misfolded tau proteins isolated from the brains of Alzheimer’s Disease patients in 3D. Their pioneering work solved the structure of the tau isoform responsible for causing Alzheimer’s Disease pathology and also revealed how they misfold into their filamentous fibrillary tangles.

Now the group has repeated their investigations to understand the structure of a different isoform of tau that misfolds to cause the neurodegeneration that underlies Pick’s Disease, otherwise known as Frontotemporal Dementia (FTD). The findings are published in Nature. FTD is a relatively rare form of dementia characterized by loss of language and writing abilities associated with the destruction of the frontal lobes of the brain.

Isolating tau proteins from the frontal cortex of the brain from a patient that died from FTD, the group used Cryo-EM techniques to investigate and solve the structure of the filamentous tau at the atomic level.

In the following video Dr Sjors Scheres explains more about the Cryo-EM technique and how the group performed their investigation to solve the 3D structure of the tau filaments.

Dr Sjors Scheres discusses the investigation, the group's findings and the impact they will have on the field. Credit: LabTube

The identification of disease-specific folds in tau filaments provides evidence for the hypothesis that different conformations of filamentous tau give rise to distinct clinical phenotypes. Unpicking these different folds and shapes will lead to better understanding of a wide range of diseases related to abnormal protein aggregation, and provide new avenues for drug design.