Studying the Role of Astrocytes and Microglia in Neurodegenerative Disease: in vivo animal models or in vitro cell culture?

Complete the form below and we will email you a PDF version of "Studying the Role of Astrocytes and Microglia in Neurodegenerative Disease: in vivo animal models or in vitro cell culture?"

Neurodegeneration involves the gradual loss of structure and/or function of neurons and is the main pathology associated with neurodegenerative disorders, such as Alzheimer’s disease, multiple sclerosis, and Parkinson’s disease. These severe and incurable neurodegenerative diseases represent serious health and economic challenges, particularly in developed societies with aging populations. For example, the World Health Organization estimates that in 2015 about 12% of total deaths worldwide were caused by neurological disorders, and millions of patients’ lives were affected by associated physical and psychological impairments, such as motor dysfunction and memory loss (1).

Pathological and physiological research has been gradually uncovering the complex neuronal mechanisms underlying neurodegenerative diseases to reveal potential therapeutic pathways. One crucial breakthrough has revealed that disease mechanisms are non-cell autonomous, requiring the convergence of damage within neurons and their neighboring cells: astrocytes and microglia. These cells are crucial in the maintenance of the central nervous system, and their activity and dysfunction has been implicated in the pathology of various neurodegenerative diseases, thus stimulating great interest in their potential as therapeutic targets (2,3).

However, although valuable, studies have traditionally involved in vivo methods using animal models (usually mice), which are limited in their physiological relevance and translation to humans. Therefore, new methods have been developed in recent years, including advanced in vitro cell culture techniques, such as three-dimensional co-cultures of primary neural cells, which are now showing promise in advancing research and generating novel disease therapeutics.

Although astrocytes and microglia were once considered to be only structural cells, they are now known to serve numerous important homeostatic maintenance functions in the central nervous system (CNS) (4). Astrocytes support neighboring neurons by regulating cerebral blood flow, maintaining synaptic function, neuronal metabolism, and neurotransmitter synthesis, and undergo a pronounced transformation called ‘reactive astrocytosis’ after brain injury and disease (2,4) (Figure 1). 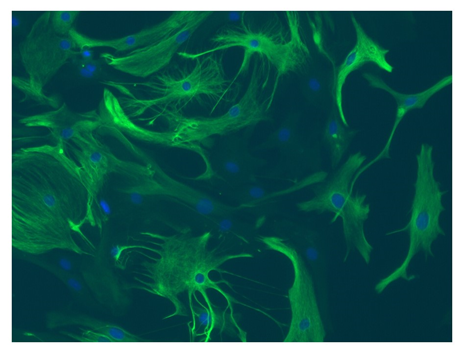 As well as astrocytes, microglia serve as programmed macrophages in the CNS, regulating brain development, maintaining neural networks, and repairing injury through mediating neuroinflammation and eradicating any antigens that may endanger the CNS (3) (Figure 2). As key components of the inflammatory response to CNS injury and disease, microglia can have both neurotoxic and neurotrophic effects (5). 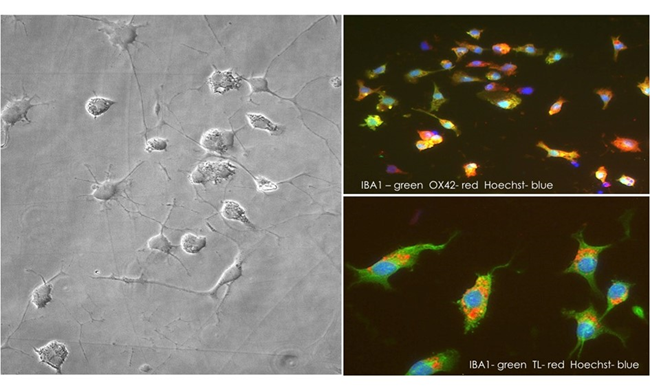 In vivo studies using animal models (i.e., genetic or chemical disease mimics in mice) have revealed that changes in astrocytic and microglial functions can underlie the pathology of neurodegenerative diseases, including in amyotrophic lateral sclerosis (ALS) and Parkinson’s disease, through their intimate contact with vulnerable neurons.

For example, molecular genetic methods have produced ALS mouse models that exhibit age-dependent, progressive fatal paralysis along with neuroinflammation, including astrogliosis and microgliosis, which are all hallmarks of ALS in humans (2). Studies have also revealed that microglia activation and astrocytosis underlie rapid ALS progression (6). In addition, Parkinson’s disease is characterized by the loss of dopaminergic neurons of the substantia nigra, and evidence of the converging role of microglia and astrocytes in Parkinson’s disease, such as the pro-inflammatory activation of microglia, has come from chemically inducing the disease in mice via administration of MPTP (1-methyl-4-phenyl-1,2,3,6-tetrahydropyridine) (7).

Are in vivo animal models the best approach?

These and many other findings have led astrocytes and microglia to be considered potential therapeutic targets for neurodegenerative diseases, and recent in vivo studies using animal models have made progress in this regard. For example, Elgueta et al. (2016) found that a dopamine receptor (D3) antagonist (PG01037) exerts a therapeutic effect in Parkinson’s disease mouse models (MPTP mice) due to a reduction in the loss of dopaminergic neurons, induced by an anti-inflammatory response in microglia and a beneficial astrogliosis (8). In addition, Calvello et al. (2017) found that supplementing the diets of MPTP mice with Vitamin D attenuated the pro-inflammatory activation of microglia (9).

However, although such in vivo studies using animal models have generated valuable findings, the neuronal physiology and pathology of neurodegenerative disease in mice does not wholly replicate that of our own. As such, in some instances, findings from animal-based in vivo studies can be difficult to translate to humans (10). Therefore, they may give misleading results in research as well as in drug screening, which can increase risks and costs in downstream clinical trials.

Consequently, novel in vitro cell culture methods are increasingly advancing to give viable, more physiologically representative models of neurodegeneration to elucidate the role of astrocytes and microglia in these diseases. For example, human induced pluripotent stem cells (iPSCs) can be used to generate astrocytes for cell culture (11). Another new line of research providing breakthroughs has used three-dimensional co-culture methods to investigate how interactions between astrocytes and microglia may underlie neurodegenerative diseases.

New three-dimensional co-culture methods using primary cells have enabled the in vitro generation of different neuronal models that more effectively mimic the in vivo environment. This has allowed the study of how multicellular interactions between astrocytes and microglia could underlie neurodegeneration, as well as the identification of new biological pathways to target when treating neurodegenerative diseases.

For example, Liddelow et al. (2017) used three-dimensional in vitro co-cultures of rodent neurons and astrocytes to describe a novel mechanism of neurodegeneration. They found that microglia activation by pro-inflammatory factors from a newly described astrocyte subtype, termed A1, induces neuronal death. Moreover, they discovered that A1 cells are found in disease states and that blocking their formation prevents neural destruction, indicating that this could be a new therapeutic approach (4).

In addition, Efremova et al. (2017) co-cultured immortalized murine astrocytes (IMA) with Lund Human Mesencephalic (LUHMES) neurons and found that an inflammatory cytokine mix reduced the normal support provided to neurons by IMA, and triggered neurotoxicity after prolonged exposure. However, neurotoxicity was prevented when the researchers targeted astrocytes with anti-inflammatory drugs, and toxicity of astrocytic supernatants was prevented by targeting neurons with neuroprotective drugs. As such, the authors concluded that this co-culture can be feasibly used for profiling both glial/myeloid cell-directed and neuroprotective strategies (12).

Lastly, Urrutia et al. (2017) tested the anti-inflammatory effects of hepcidin on in vitro primary cultures of amyloid β (Aβ)-activated astrocytes and microglia, as well as on Aβ-intoxicated mouse models, and found that hepcidin downregulates the inflammatory and pro-oxidant processes induced by Aβ to protect neighboring neurons. As inflammation and oxidative stress have pivotal roles in the pathogenesis of Alzheimer’s disease, these complementary in vitro and in vivo findings may point towards a new therapeutic strategy for Alzheimer’s disease.

Neurodegenerative diseases present serious health and economic challenges worldwide. Continuing to advance research and drug discovery is therefore imperative if we are to tackle these challenges and improve the quality of life of the millions of patients affected each year.

Although traditional in vivo studies using animal models have been valuable in elucidating the role of astrocytes and microglia in neurodegenerative disease, these often lack physiological relevance and translation to humans, and can thus increase risks and costs in clinical trials by providing misleading results.

New in vitro cell culture methods, such as three-dimensional co-cultures of primary human cells that more accurately mimic the in vivo multicellular environment can, therefore, complement or even replace in vivo studies using animal models. Current research is showing that these new in vitro approaches are viable, and have the potential to identify novel therapeutic pathways to improve, and perhaps even save, many patients’ lives.

Complete the form below to unlock access to this Audio Article: "Studying the Role of Astrocytes and Microglia in Neurodegenerative Disease: in vivo animal models or in vitro cell culture?"