The application of synthetic biology has expanded rapidly in the last decade owing to the reduced cost of, and advances in, DNA synthesis and sequencing, improved knowledge of genome organization and increased use of data science. It can be used to engineer new biological systems or re-design existing ones to exhibit desirable properties and new functionalities for several purposes across a variety of fields, including diagnostics, manufacturing, agriculture and therapeutics.

The development of therapeutics is a time-consuming, expensive and challenging process. The cumulative success of developing a drug, that is both efficacious and safe, from Phase I to launch is low (~ 90% of drug candidates that reach early clinical development fail). As such, there is great incentive to exploit the promise of synthetic biology in drug development, to increase the chances of a therapeutic making it to market, so that it may benefit patients in a real-world setting. This article will discuss how synthetic biology principles can be applied at various stages of therapeutic development – from elucidating disease mechanisms and identifying drug targets to producing therapeutics at scale.

Natural products are chemical compounds with pharmacological or biological activity that are produced by organisms in nature and can be used as a source of new drugs. Natural products are more complex than chemically synthesized drug molecules. However, growing research is addressing challenges relating to their isolation, optimization and synthesis.

“Natural products are historically unparalleled sources for drug discovery. However, their low accessibility, such as supply and analog synthesis issues, prevents them [from being used] for drug development in pharmaceutical companies. Thus, our motivation is to develop methods that solve the above problems and enable us to efficiently use natural products for drug discovery by using a synthetic biology approach,” said Teigo Asai, professor at the Graduate School of Pharmaceutical Sciences in Tohoku University.

What is a biosynthetic gene cluster?

A biosynthetic gene cluster is a group of two or more genes within a living organism's genome that, together, encode a biosynthetic pathway for the production of a specialized metabolite. This metabolite may possess therapeutic properties and could be utilized as a natural product drug.

Using synthetic biology, Asai and colleagues identified that fungus is a rich source of diverse natural products, that can be challenging to manufacture chemically in large quantities. One example is decalin-containing diterpenoid pryones (DDPs), a type of meroterpenoid natural product, which has shown promise against proliferative activities of cancer cells.

Using genome mining, the team identified putative DDP gene clusters in fungus, designed five pathways from those clusters and reconstructed them stepwise in a heterologous host: the filamentous fungus Aspergillus oryzae NSAR1. These biosynthetic gene clusters are derived from nonculturable organisms, therefore heterologous expression in an established host is necessary. Synthetic biology is also crucial for generating well-characterized chassis organisms, like Aspergillus oryzae, which can be genetically manipulated to facilitate drug production.

Asai et al. introduced additional modification enzymes to these pathways to generate 22 DDPs of which 15 analogs have not been previously reported. Finally, they tested the DDP analogs, discovering candidates that can inhibit proliferation of cancer stem cells, suppress HIV and prevent amyloid-beta formation. Discussing the power of synthetic biology in this context, Asai said: “In this research, we showcased that combinatorial biosynthesis based on the redesigning of biosynthetic pathways is advantageous for rationally expanding the chemical space of biologically-active natural products.  We also demonstrated that the library is useful for discovering biologically active molecules.”

The same team led by Asai recently carried out fungal genome mining and found a putative macrolide (a class of natural products) biosynthetic gene cluster. Using vibrational spectroscopy and the crystalline sponge method to determine the stereochemistry of the produced compound, they proposed its biosynthetic pathway. This study further showed that through synthetic approaches, cells can be genetically transformed to produce structurally complex biochemical molecules.

Asai elaborated, “We are currently expanding our methodology to other types of natural products to construct a range of natural product libraries to find drug ‘seeds’ especially for refractory cancer and intractable infectious diseases. In addition, we are discovering and producing natural products with novel structures and biological activities from gene resources by using synthetic biology methods.”

How Scalable Genome Engineering Can Improve Results With an Automated Workflow 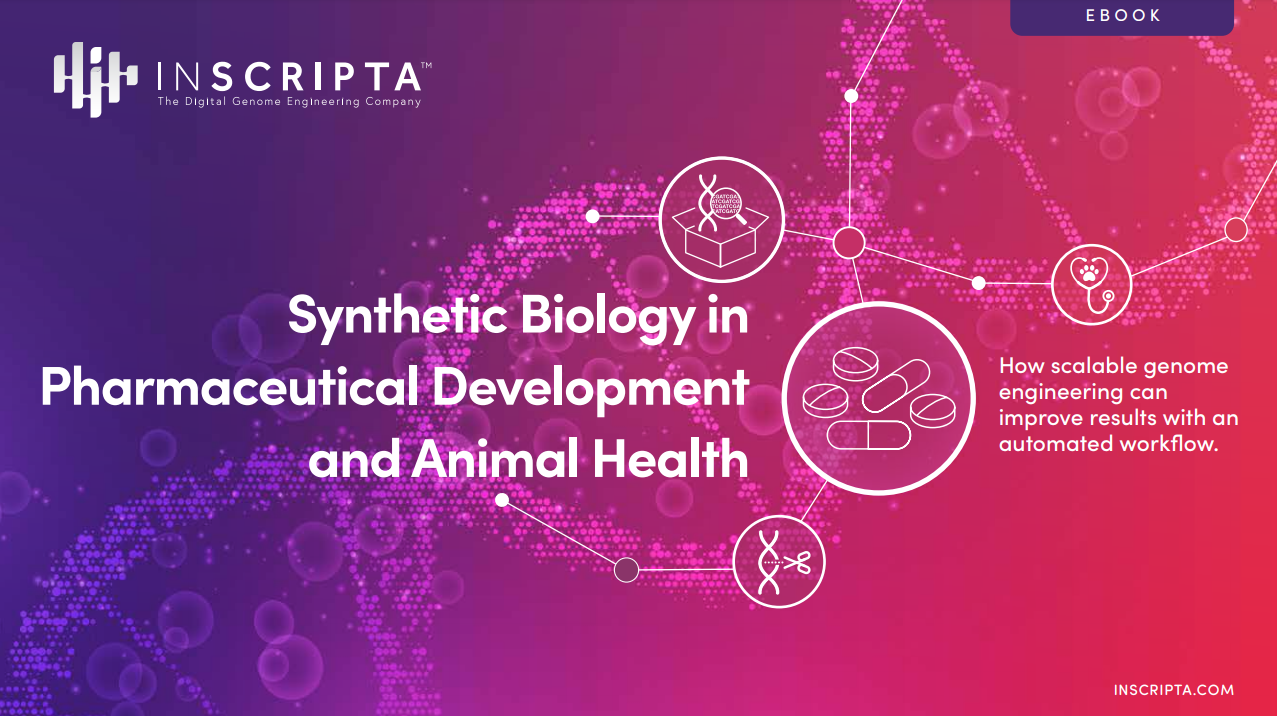 Many of the medications we rely on for human and animal health are based on compounds derived from nature, which are often difficult to find, hard to extract or of varying purity in natural sources. These limitations can hinder production and threaten access to critically needed treatments. Download this eBook to discover an automated benchtop system that allows you to design, engineer, evaluate and track editing results whilst easily being integrated into established workflows.

One of the most valuable synthetic biology tools in target validation is clustered regularly interspaced short palindromic repeats-Cas (CRISPR-Cas) genome editing, which received the 2020 Nobel Prize in Chemistry.

A study published in Science Translational Medicine demonstrated that the therapeutic targets of some investigational cancer drugs are actually non-essential for tumor growth despite previous reports using RNA interference and small-molecule inhibitors. The researchers exploited CRISPR-Cas9-based approaches to investigate drug–target interactions for cancer therapeutics at various stages of development. They found that the efficacy of the drugs was unaffected by the loss of the proposed targets, suggesting that the genes had initially been misidentified as targets.

CRISPR gene editing can also be used to identify mutations that confer resistance to drugs. Rockefeller University’s Corynn Kasap and colleagues developed an approach that combines CRISPR-Cas9 genome editing with high-throughput screening to investigate the mechanism of action for anticancer therapeutics including ispinesib, a selective small-molecule inhibitor and the cytotoxic drug YM155 (sepantronium bromide). In doing so, they were able to explore, using cancer cell lines, whether the mechanisms were likely to result in drug resistance. Their findings were published in Nature Chemical Biology.

As part of the development process, a drug compound identified as having therapeutic value is subsequently refined to produce compounds with higher potency and better selectivity as part of hit-to-lead and lead optimization. This can be achieved using medicinal chemistry, via iterative rounds of chemical modifications to better understand structure–activity relationships and metabolic stability. Directed evolution based on mutagenesis (such as error-prone polymerase chain reaction) and selection is often used as an approach to evolve genetically-encoded molecules such as proteins. Some recently developed synthetic biology tools for directed evolution include in vivo continuous evolution in yeasts, CRISPR-activation-induced cytidine deaminase (AID) and OrthoRep that is based on an orthogonal DNA-polymerase-plasmid pair. 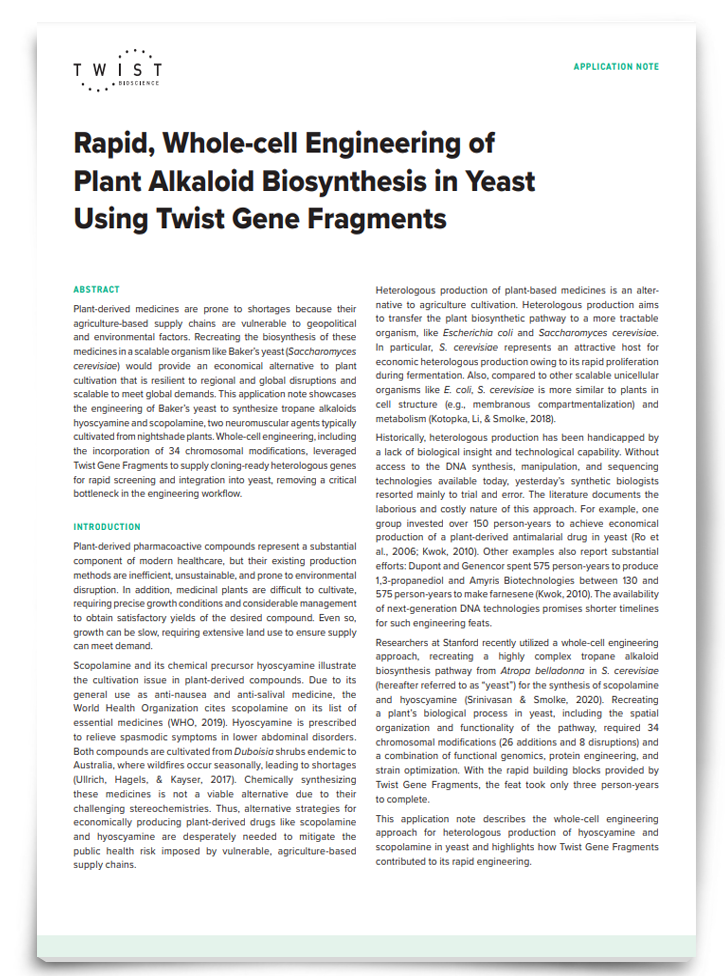 Plant-derived medicines are prone to shortages because their agriculture-based supply chains are vulnerable to geopolitical and environmental factors. Recreating the biosynthesis of these medicines in a scalable organism like Baker’s yeast would provide an economical alternative to plant cultivation that is resilient to regional and global disruptions and scalable to meet global demands. Download this app note to discover how gene fragments can reduce the time it takes to screen clones and remove a critical bottleneck in the engineering workflow.

The scalable production of a drug candidate is crucial to bring it to market. CRISPR techniques can be useful to genetically engineer chassis microorganisms such as Escherichia coli and fungi that can be cultured in large-scale bioreactors. Yeasts are often the "chassis of choice" for drug fermentation as they possess several advantageous characteristics, for example, they can host an extensive collection of genetic tools and require inexpensive growth media to thrive. Stanford University researchers Prashanth Srinivasan and Christina D. Smolke, recently highlighted in Nature, the use of yeast as a biosynthesis platform to facilitate the discovery of tropane alkaloid derivatives. Tropane alkaloids hold great promise as therapeutic agents for neurological disease.

While synthetic biology techniques are well established in yeast, CRISPR-based genetic toolkits developed for mammalian cell engineering are not easily adapted to other microorganisms such as E. coli.

What is a chassis?

A chassis is an organism that can house genetic components and provides an environment that permits them to function. They are typically used because their genomes are better understood and/or they have a metabolic network that enables them to effectively synthesize desired products.

Eriko Takano, professor of synthetic biology at the University of Manchester and colleagues recently constructed a CRISPR-Cas12a toolkit that can integrate large DNA fragments such as whole metabolic pathways into the host genome in a single step (8.4 kbp). The technique also enables deletion or genome integration with about 80% and 50% efficiency, respectively, without the use of a genetic marker that adds to the plasmid size. Furthermore, robust transcriptional repression of target genes occurs with > 90% efficiency in a single cloning step.

“My group studies metabolic engineering of Streptomyces coelicolor for antibiotic production. To do this efficiently, we need to add and delete a large number of genes rapidly. The new CRISPR-Cas9 method would be perfect for this purpose as it is efficient, but originally it did not work in S. coelicolor as it requires careful optimization for each bacterial strain. We show in the paper that the optimization can be achieved by fine tuning Cas9 expression. We found that too high levels of Cas9 expression can become toxic for some bacteria, such as S. coelicolor, while too low levels stop the system from functioning, and identified the species-specific sweet spot of Cas9 expressions in each case,” said Takano. Synthetic biology is ushering in a new era of biomanufacturing using transformed microorganisms that function as “chemical factories”.

“At the moment, we are expanding this CRISPR-Cas9 system to other relatives of S. coelicolor, including rare actinomycetes, which are a rich reservoir for novel antibiotics. Being able to apply these efficient genome editing methods to a wide range of different species will give us faster access to these new compounds, accelerating our pipeline for the heterologous expression of secondary metabolite biosynthesis gene clusters,” added Takano. 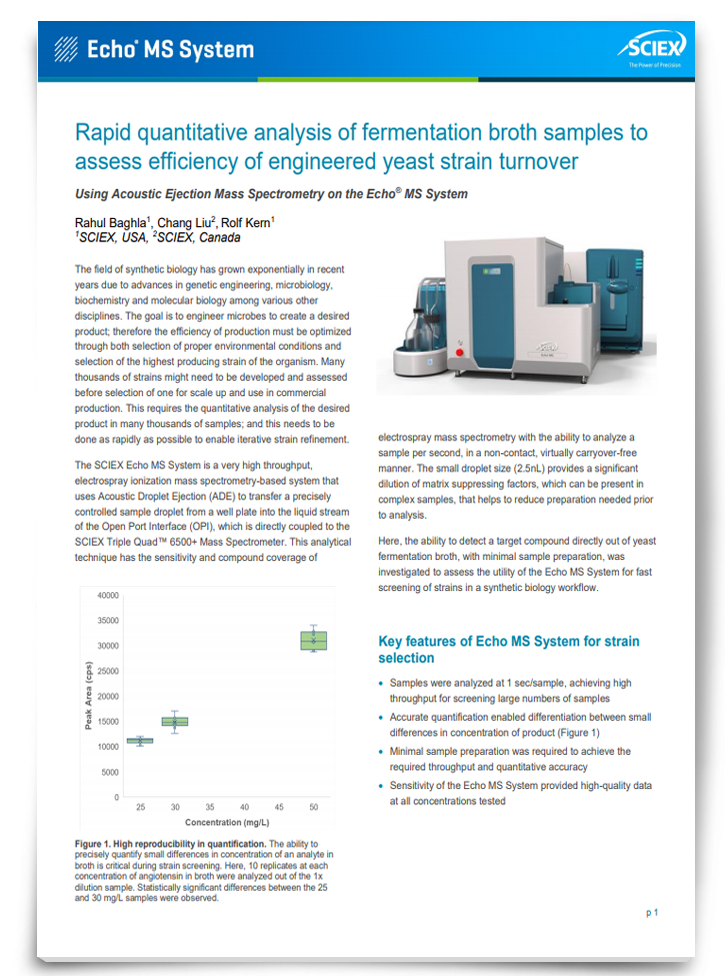 The goal of synthetic biology is to engineer microbes to create a desired product; therefore, the production efficiency must be optimized through the selection of proper environmental conditions and the highest producing strain of the organism. Download this app note to discover a system that achieves high throughput for screening, requires minimal sample preparation and enables differentiation between small product concentration differences.

Despite the promises of synthetic biology for therapeutic development, it is important to acknowledge some of the remaining challenges. Firstly, genetic modules can be challenging to standardize and cannot simply be “plugged and played” across various cellular systems. This is further complicated by insufficient understanding of how to model chassis organisms. Therefore, effort is being directed towards being able to build a cell "from the bottom up” through identifying the minimal set of genes needed for cell viability. Secondly, genetic circuits introduced into cells might not be permanent and stable due to environmental influences. This can lead to batch-to-batch variability, which might compromise drug assessment and production.

Thirdly, besides the coding genome, there is the non-coding element, which also plays a role in regulating gene expression; however, this process requires further study. Finally, unlike an engineered system where parts can be easily transferred with slight modification, biological components may not be easily transferable across chassis organisms as they are usually non-orthogonal and can interact with genes, proteins and metabolites of the chassis. 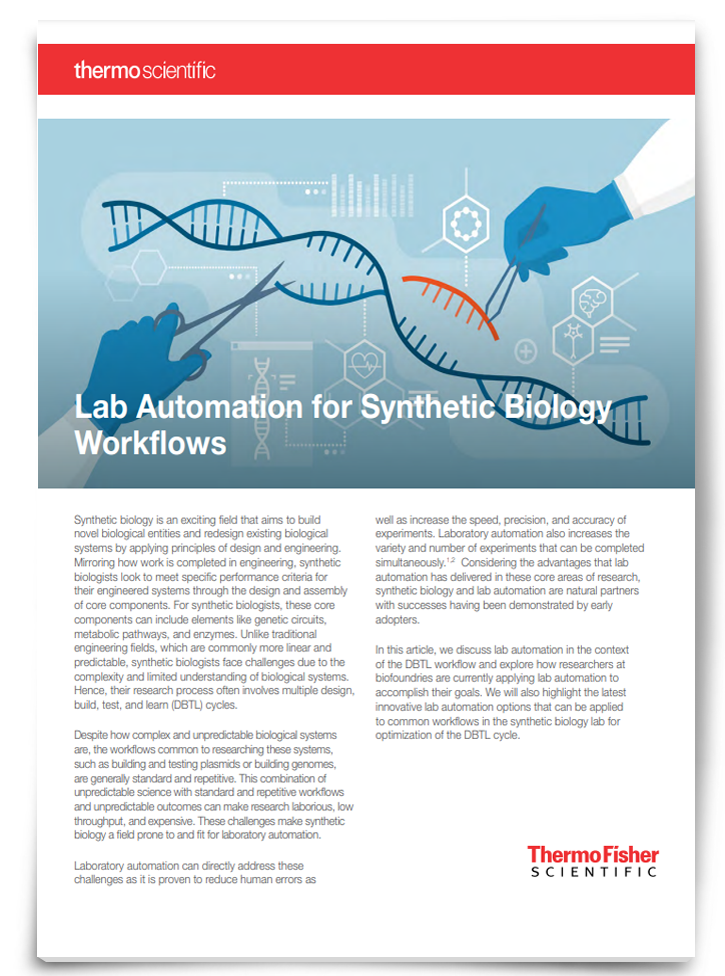 Synthetic biology is an exciting field that aims to build novel biological entities and redesign existing biological systems by applying principles of design and engineering. Synthetic biologists face challenges due to the complexity and limited understanding of biological systems. Download this guide to learn more about how automation can reduce human errors as well as increase the variety and number of experiments that can be conducted simultaneously.

Andy Tay, PhD
More from this author >
Advertisement
Chosen for you
Whitepaper

Biobanks, Biotechs and the Need to Recognize a Crisis