Complete the form below and we will email you a PDF version of "The Sci-Fi Eye: How Artificial Retinas Could Help Restore Sight"

Artificial eyes are one of the most characteristic elements of robots in science fiction movies. But this technology may soon be moving out of the cinema and into the clinic, as part of efforts to restore blind people’s vision. The biggest challenge for scientists working in this field has been to create a round, or rather semi-circular shape of the retina (the location in the eye where the original image is created).

The photosensitive matrix, which is the equivalent of the eye’s retina in cameras, has a very simple upright shape. This means that the reflected light spreads more from the matrix than in the case of the biological retina, which focuses and absorbs more light. For this reason, a group of researchers from the Hong Kong University of Science and Technology (HKUST) has recently developed a prototype prosthetic eye, based on a human, concave retina, which has been designed using nanowires. The study was published in Nature on May 20. 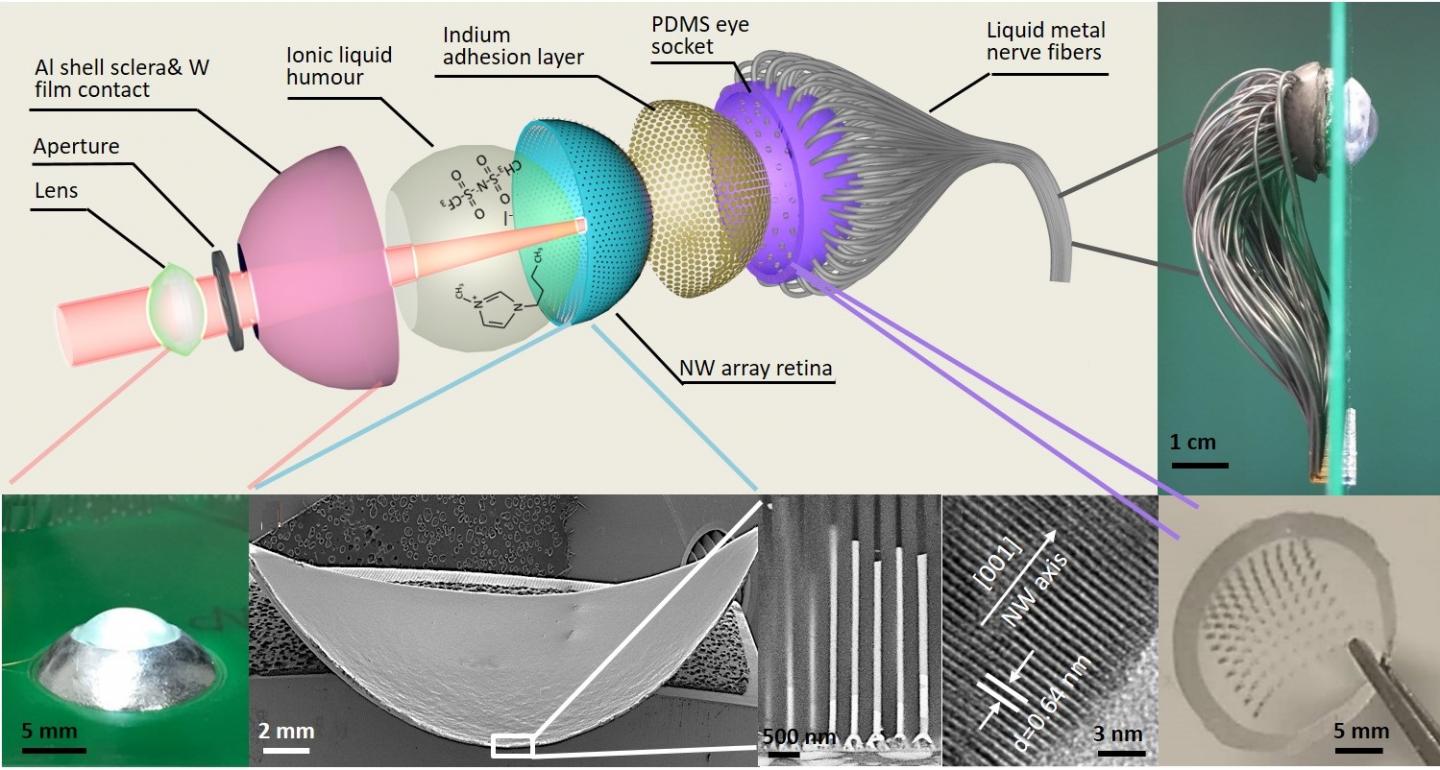 As in our natural retina, an image is created on the nanowire array, which is further transmitted through other connectors that depart from the array and mimic the function of nerve fibers. The artificial retina is mounted in a silicone polymer, which plays an important role as an intermediary between nanoconnectors. The nanowires are built with formamidinium lead iodide, one of the most widely used perovskites. These are minerals which can produce electricity when are exposed to sunlight.

“We chose formamidinium lead iodide (FAPbI3) as the model material for nanowire growth here owing to its excellent optoelectronic properties and decent stability,” say the authors of the study.

The artificial retina can detect light of a wide range of intensities, from 0.3 microwatts to 50 milliwatts per square centimeter  According to the authors this incredible sensitivity comes from the use of perovskites in the nanowires.

“At the lowest intensity measured, each nanowire in the artificial retina detects an average of 86 photons per second, on a par with the sensitivity of photoreceptors in human retinas,” says Hongrui Jiang, author of a commentary piece also published in Nature.

A glimpse into how the artificial eye represents letters. Credit: HKUST

The major difference between our natural retina and this artificial one is that in the human retina there is a blind spot, a fragment which acts like a passage for all nerves from the retina to the brain. All of the nerves that leave the retina do not go behind it but rather in front of it, accumulating in the blind spot before going to the brain. In the artificial eye, scientists resolved that problem by placing liquid wires behind the sensing material of nanowires.

“We note that the liquid-metal wires are behind the sensing material, thus avoiding the light-loss and blind-spot problems of the human retina,” say the authors of the study. Overall, its response time to a light stimulus is much faster than that of our human eye. “It can produce a current in response to a pulse in just 19.2 milliseconds, and can then take as little as 23.9 ms to recover […] For comparison, the response and recovery times of photoreceptors in human retinas range from 40 to 150 ms,” highlights Jiang.

The sci-fi eye’s biggest advantage is its resolution, achieved by the dense packing of nanowires in the artificial “retina”. Nevertheless, the research group still needs to solve many problems, such as the lifetime of that artificial retina.

“Gu et al. report that there is no obvious reduction in its performance after nine hours of operation, but the performance of other electrochemical devices can deteriorate over time,” says Jiang. The research is a good case study of how difficult it is to develop prosthetics when your main matter is “brittle”.

To improve the image resolution further, nanowires will need a smaller diameter, which is very complicated from a technological point of view. The overall cost of artificial retinas is still very high, which limits the prototype development. Overcoming these obstacles will certainly bring us closer to replacing the human retina with a sci-fi inspired alternative. What is more important, we will have a real solution for blind people.