What is Super-Resolution Microscopy? STED, SIM and STORM Explained

Complete the form below and we will email you a PDF version of "What is Super-Resolution Microscopy? STED, SIM and STORM Explained"

Thanks to advances in fluorescence microscopy, a type of light microscopy in which one wavelength of light is absorbed and another omitted, scientists can now use super-resolution microscopy to directly observe living subcellular structures and activities.

What is super-resolution microscopy?

The resolution of conventional light microscopy is limited to around 200 nm due to the diffraction of light. As light passes through the surrounding medium in a light microscope, a single point of light (called a fluorophore) will appear blurry. The size of the blur is known as the point-spread function. When two structures are closer than the diffraction limit, they will appear as a single blur rather than two separate structures. 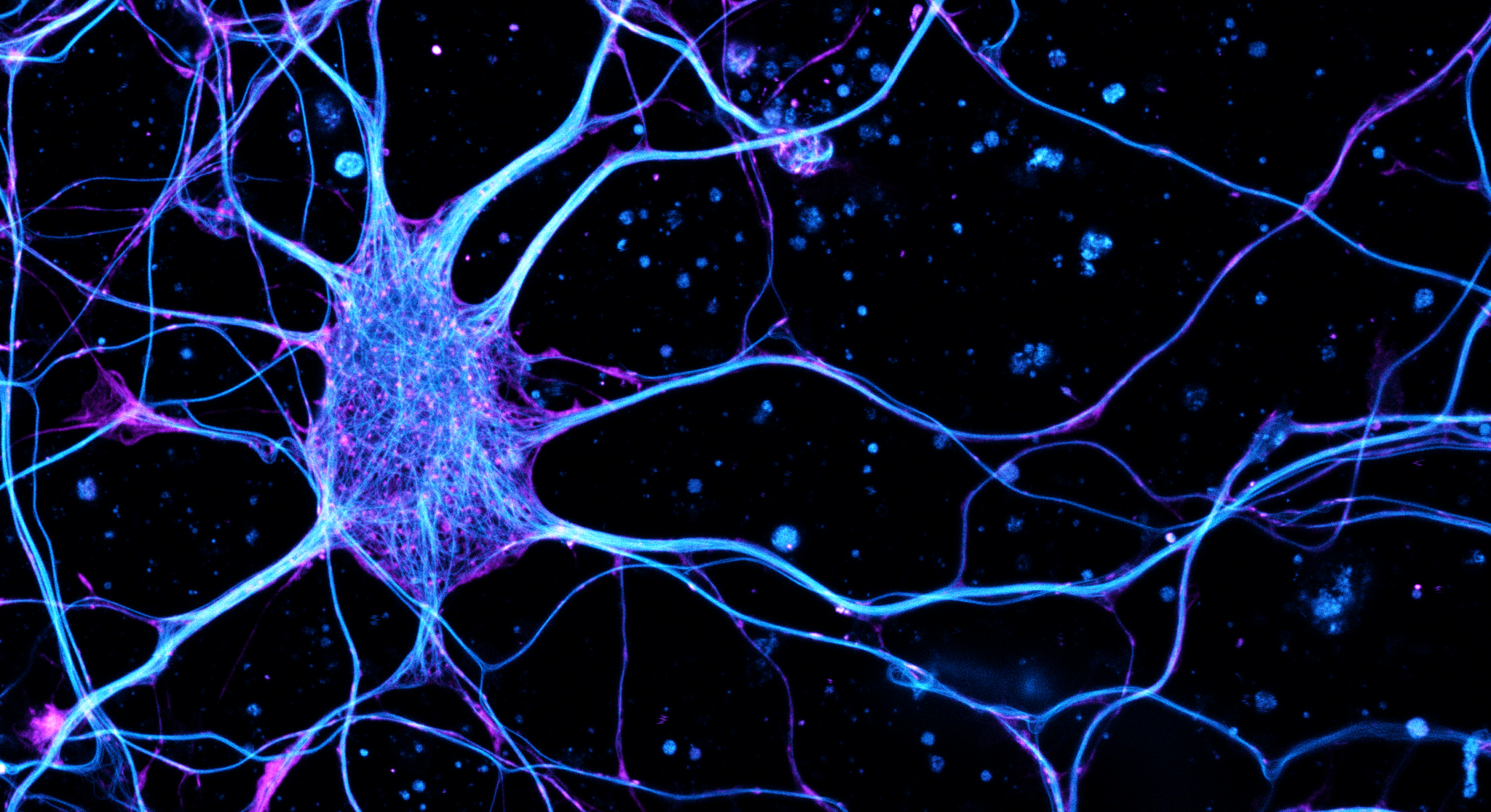 How does super-resolution microscopy work?

Stimulated Emission Depletion (STED) Microscopy is a form of super-resolution microscopy that uses a technique called spatially patterned excitation. During STED microscopy, two lasers are used on the focal plane. When used together, the excitation laser and the STED laser reduce the effective point spread function (PSF). The lower the PSF, the higher the resolution.

The STED laser suppresses excited-state fluorophores located near the excitation focal point by a process called stimulated emission. A donut-shaped ring of fluorophores around the center of the image field is suppressed, whilst the center is not. The result is a PSF lower than the diffraction limit. Incredibly sensitive single-photon detectors then pick up the signal from the central fluorophores. 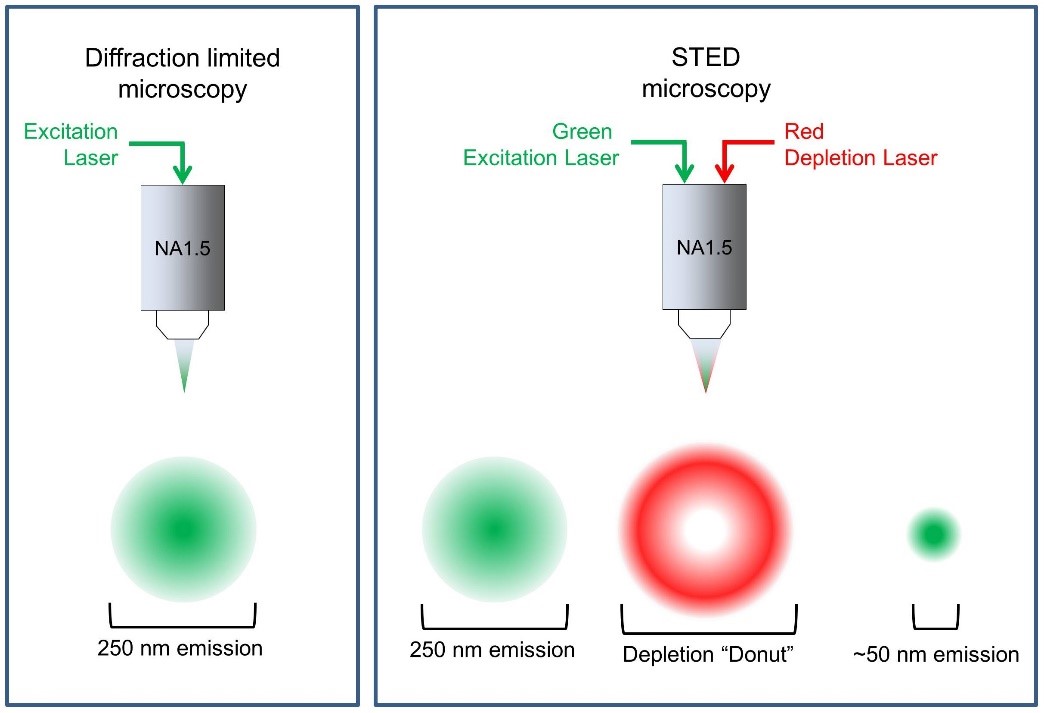 Diagrammatic overview of STED microscopy principle, showing the schematic emission of light from a fluorescent label under conventional microscopy (left) and with the inclusion of a depletion laser “donut” (right), indicating the improvement in spatial resolution.
Saturated structured-illumination microscopy (SSIM) and reversible saturable optically linear fluorescence transitions (RESOLFTs) are other forms of super-resolution microscopy that use patterned excitation to enhance resolution.

What is structured illumination microscopy (SIM)?

Structured Illumination Microscopy (SIM) is used to increase the spatial resolution of light microscopy. A fluorescent sample is excited multiple times using striped illumination patterns. Each time the orientation and position of the stripes are changed. 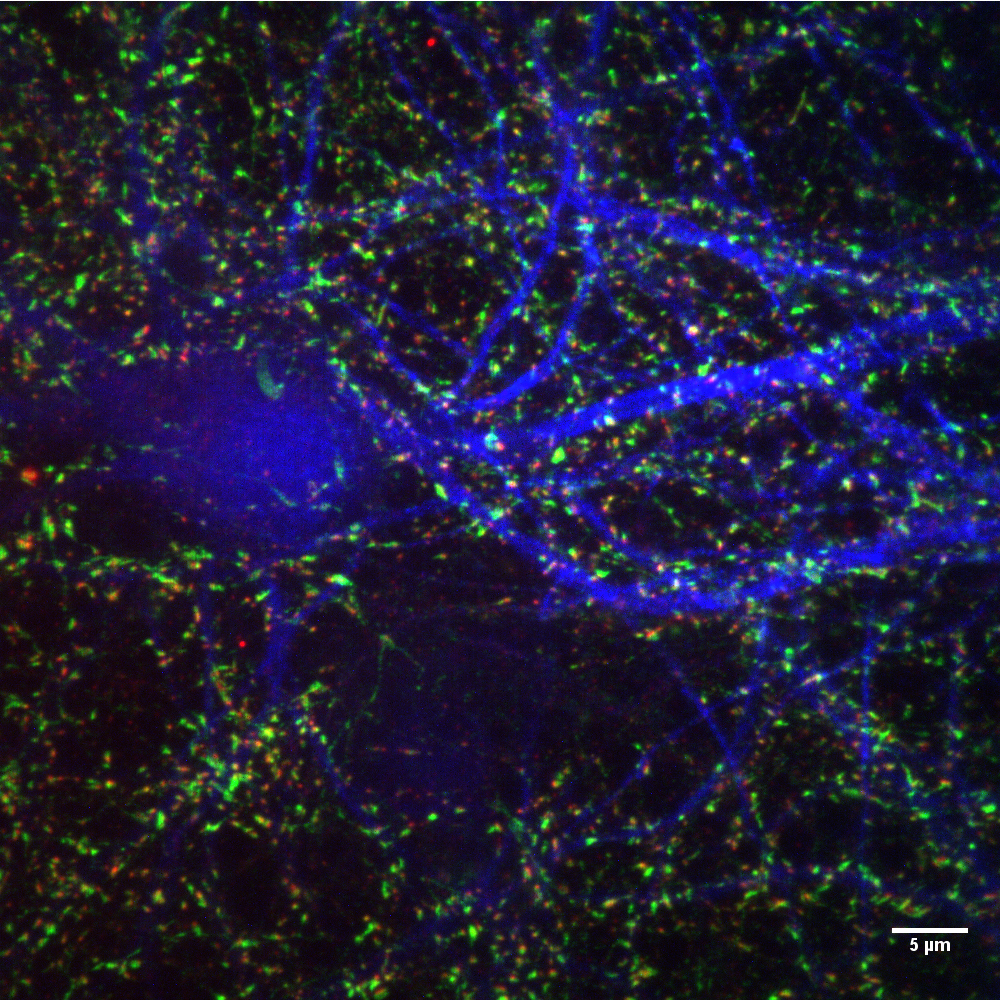 iSIM  (instant  structured  illuminated  microscopy)  image  of   primary  rat  cortical  neurons  aims  to  understand  the  nanoscopic  organization  of  synapses using  stains  for:  MAP2  (blue)  as  a  morphological  marker;  the  presynaptic  protein  bassoon  (red)  as  an  active  zone  marker;  and  SV2a  (Synaptic  vesicle  glycoprotein  2A, green)  as  a  marker  of  synaptic  vesicles. Image courtesy of Deepak P. Srivastava, Director of the Wohl Cellular Imaging Centre at King’s College London, UK
These images are analyzed using computer software that looks at Moiré patterns. The stripes fired at the sample interact with high frequency light produced from the sample. This interaction produces a third pattern that can be more easily analyzed. Using multiple images, further detail is obtained, and an image is reconstructed with around twice the resolution as traditional light microscopy.

The benefits of SIM include:

STORM, part of a family of single-molecule localization microscopy (SMLM) techniques, activate or excite only a small percentage of fluorophores at one time, reducing spatial overlap and allowing images with as little as 5 nm resolution.

STORM combines photoswitchable dyes and a lower power activation laser, blinking or switching from dark or off states to emission or on states. By imaging the photoswitchable fluorophores over time, it is possible to identify the precise location of these molecules. First unveiled in 2006, STORM is one of the newer forms of super-resolution imaging. 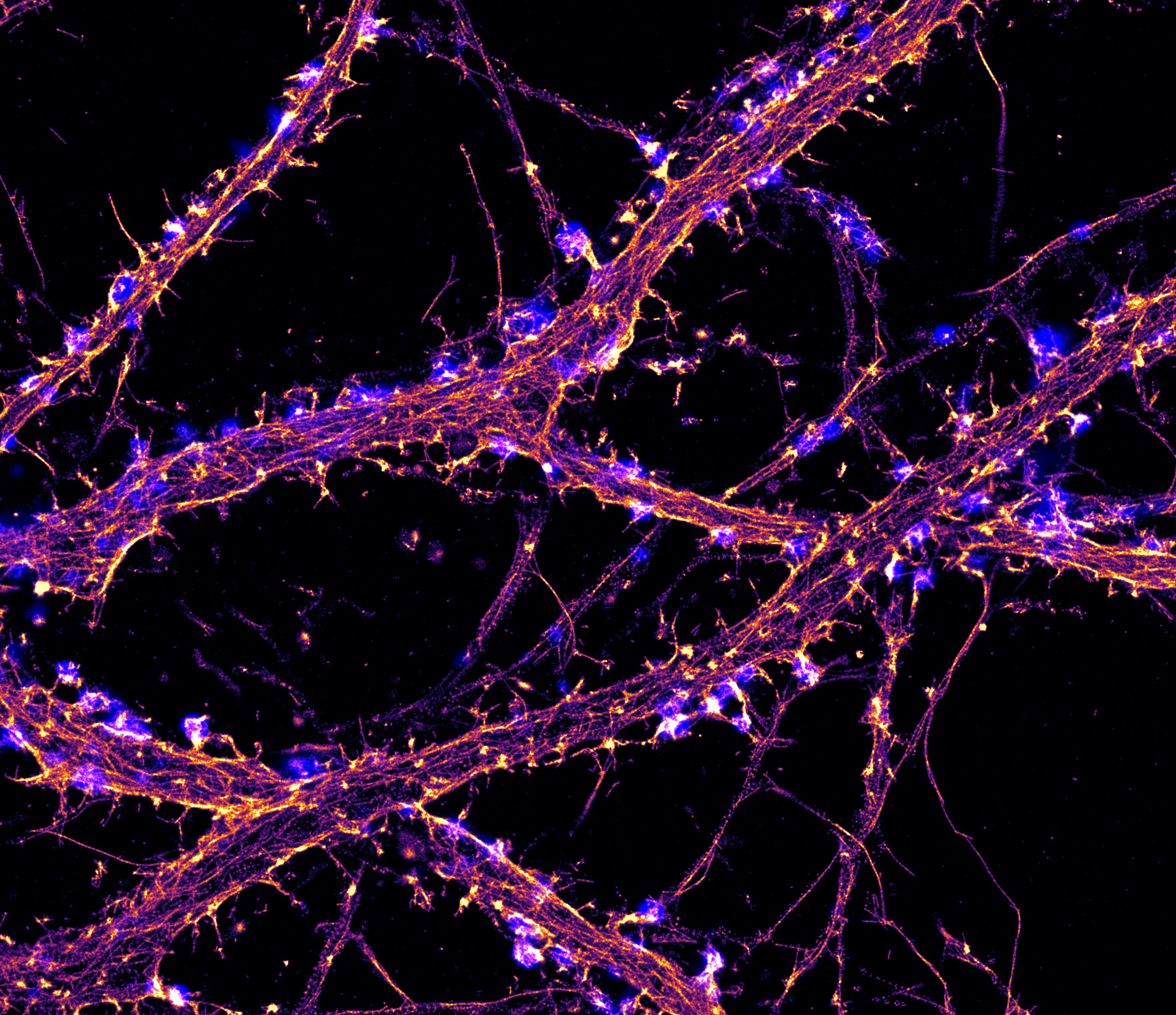 What is dSTORM microscopy?

What is two-photon excitation (TPE)?

TPE is an optical process that uses multiphoton absorption to image live samples, resulting in less phototoxicity than conventional confocal microscopy. Two-photon microscopes use infrared excitation light to penetrate further into tissues and with minimal scatter compared to exciting at longer wavelengths. For each excitation of the fluorophore, two photons of infrared light are absorbed, and excitation is limited to a tiny focus volume, so there is less contribution from out-of-focus fluorescence.

Complete the form below to unlock access to this Audio Article: "What is Super-Resolution Microscopy? STED, SIM and STORM Explained"

Choosing a Biomolecular Imager for Your Workflows