Anna is a science writer at Technology Networks. She holds a first-class honours degree in biological sciences from the University of East Anglia, before joining Technology Networks she helped organize scientific conferences.
Learn about our editorial policies
& Ruairi J Mackenzie

Anna is a science writer at Technology Networks. She holds a first-class honours degree in biological sciences from the University of East Anglia, before joining Technology Networks she helped organize scientific conferences.
Learn about our editorial policies
& Ruairi J Mackenzie

At the start of the year, ground-breaking findings published in Science suggested that the demyelinating neurodegenerative disease multiple sclerosis (MS) is a complication of infection by Epstein-Barr virus (EBV). A second study suggested a mechanistic link between virus and disease. As well as increasing our understanding of MS and its occurrence, the findings are encouraging for the development of new therapeutics that target EBV-infected cells, such as ATA188.

Developed by the biotechnology company Atara Biotherapeutics, ATA188 is an off-the-shelf, allogeneic T-cell immunotherapy that specifically targets EBV-infected B cells and plasma cells. Technology Networks spoke to Atara’s chief medical officer, AJ Joshi, to learn more about ATA188, its progress so far and how it could revolutionize the treatment of MS patients.

Ruairi J Mackenzie (RM): Can you explain how ATA188 might be used in the treatment of MS?

AJ Joshi (AJ): For a long time, there have been a lot of data associating EBV infection with the development of MS, but no clear idea of what that association means. This January, two landmark studies published in Science and Nature strongly suggest that EBV is actually the leading cause of MS. EBV is a required trigger for the disease and likely contributes to its progression. This is compelling news for the MS community, because it points to a new avenue for potential treatments: selectively targeting EBV-infected cells, without suppressing the broader immune system.

In the United States, more than 90% of individuals will be infected with EBV by the age of 35, and the vast majority don’t develop an autoimmune disease as a result. That means that there are likely other factors such as genetic predisposition and other environmental factors that contribute.

Though these other factors contribute, importantly the Science study identified that EBV is likely the leading causative factor:

For us, this study supports our investigational approach. It reinforces that MS isn’t triggered by a whole immune system gone haywire. The blame very well may lie with a smaller subset of cells, likely B cells and plasma cells, infected with Epstein-Barr virus.

At Atara, we’ve been working on an approach designed to target EBV-infected cells. ATA188 is an investigational off-the-shelf, allogeneic T-cell immunotherapy that specifically targets the EBV-infected B cells and plasma cells for people with MS, starting with studies in progressive forms of the disease. We believe that by targeting those immune cells specifically, and leaving non-infected healthy cells alone, we may be able to halt or, for the first time, reverse some of the damaging autoimmune processes associated with MS.

RM: EBV-infected B cells have been identified in the brains of MS patients. Would ATA188 T cells be able to cross the blood-brain barrier to target these cells?

AJ: ATA188 is a T-cell immunotherapy. T cells can access the central nervous system (CNS) more readily than large antibodies, as an example. We already have good clinical evidence of this with one of our other programs using a different type of EBV T cell for cancer.

ATA188 may impact two separate pathways in the brain thought to damage myelin: 1) Interrupt the cell-mediated autoimmune cascade driven by EBV-infected B cells and 2) Reduce the production of myelin-targeted antibodies made by EBV-infected plasma cells.

We believe that precisely eliminating EBV-positive B cells and plasma cells has the potential to benefit patients with MS.

RM: At what clinical trial stage is ATA188? What is the intended timeline for its development?

New clinical data from the Phase I open-label extension (OLE) of ATA188 in patients with progressive MS was presented at the 37th Congress of the European Committee for Treatment and Research in Multiple Sclerosis (ECTRIMS) in October 2021. The presentation, titled “Updated open-label extension clinical data and new magnetization transfer ratio imaging data from a Phase I study of ATA188, an off-the-shelf, allogeneic Epstein-Barr virus-targeted T-cell immunotherapy for progressive multiple sclerosis” featured new translational data based on magnetization transfer ratio (MTR) and updated OLE clinical data in patients with progressive MS treated annually with ATA188 for up to 39 months. MTR is an MRI imaging biomarker considered to reflect the state of myelination in the CNS in MS patients and may provide important insights into the mechanism of expanded disability status scale (EDSS) improvement in our clinical assessment of ATA188.

We are actively enrolling our randomized Phase II, double-blind, placebo controlled EMBOLD study (NCT03283826) evaluating the efficacy and safety of ATA188 in patients with progressive MS across clinical sites in North American and Australia. An interim analysis in Q2 is planned to assess efficacy and safety.

Atara plans to conduct pivotal Phase III studies at the conclusion of the Phase II study:

RM: Molecular mimicry has been suggested as a mechanism of EBV-mediated pathophysiology in MS. How can therapies targeting EBV-infected cells avoid causing autoimmune damage?

AJ: Molecular mimicry is a leading theory as to what triggers many autoimmune diseases. It helps explain why an immune system would turn on a person’s own tissues. In basic terms, it’s a case of mistaken identity. A foreign threat, like EBV, shares (mimics) certain molecular characteristics or genetic sequences with a healthy cell type in the body. Therefore, when antibodies are produced to bind and eliminate the virus, they also bind healthy cells.

As of January, this “idea” became a lot more concrete in MS. In the Nature paper, scientists from Stanford provided a detailed explanation for how this happens after an EBV infection. A cross-reactive antibody was isolated from MS patients’ cerebrospinal fluid (CSF) which strongly binds an EBV protein, EBNA1, and a “self” protein in the CNS called GlialCAM. These new data reveal how EBV infection can drive the development of antibodies that cross-react and target both EBV and CNS proteins, potentially leading to MS.

The molecular mimicry causing the MS damage in the Nature paper is driven by B cells that confuse a certain brain protein for EBV protein. The damage occurs when these B cells get exposed to the mimicry brain antigen, then actually go through a biologic process of change, and become more and more sensitized and specific to the brain antigen.

ATA188 is based on T cells recognizing EBV antigens. The T cells cannot go through the B cell process that sensitizes to the brain antigen, so would not be expected to cause issues based on mimicry. This is supported by the current safety data we have observed for EBV cell therapy across all our investigational programs.

RM: Is multiple sclerosis the only indication that could be benefited by ATA188?

AJ: We look forward to the continued study of ATA188 in progressive MS and believe our novel therapeutic approach targeting EBV-infected B cells and plasma cells may be a potential therapeutic approach for other forms of the disease. Pending further study in the field and clinical investigation, there could also be opportunities in diseases where EBV infection is associated with autoimmunity, such as systemic lupus erythematosus (SLE), Type 1 diabetes mellitus, and others. 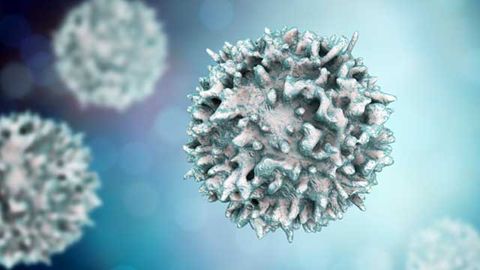 END_OF_DOCUMENT_TOKEN_TO_BE_REPLACED

Beyond ATA188, Atara is also developing related programs in other conditions where EBV plays a pivotal role, including tabelecleucel (tab-cel®), Atara’s investigational T-cell immunotherapy being studied as a potential treatment for EBV-positive post-transplant lymphoproliferative disease (EBV+ PTLD), along with other EBV-associated hematologic and solid tumors.

In advancing the EBV T-cell platform, Atara aims to develop treatments not only for EBV-associated conditions, but also other illnesses through the integration of a chimeric antigen receptor (CAR). These CAR therapies are designed to attack specific cancer targets. We’re assembling a toolkit of next-generation technologies and CAR T investigational therapies, designed to enhance the benefits of T-cell immunotherapies and address some of the current limitations in the field.