Complete the form below to unlock access to this Audio Article: "Absence Epilepsy Seizures Visualized in the Brain"

At first, the teacher described her six-year-old student as absentminded, a daydreamer. The boy was having difficulty paying attention in class. As the teacher watched the boy closely, she realized that he was not daydreaming. He often blanked out for a few seconds and wouldn’t respond when she called his name. On occasion, he would blink a lot and his eyes would roll up.

The teacher talked to the boy’s parents about his concerning behavior. His parents took him to the doctor and, after a few tests, he was diagnosed with absence epilepsy and prescribed medication. Absence epilepsy is the most common type of seizure disorders in children.

“In about 80 percent of children with absence seizures, the episodes usually stop around puberty. The other 20 percent will continue to have seizures,” said first and corresponding  author Dr. Jochen Meyer, instructor of neurology and neuroscience at Baylor College of Medicine. “Absence seizures, even if they stop, are a disabling disorder because they cause children to be momentarily absent during periods of their formative years.”

“Many of these children also present with attention deficit disorder that can persist in about 40 percent of patients despite being treated with medication and even after the seizures stop,” said co-first author Dr. Atul Maheshwari, assistant professor of neurology and neuroscience at Baylor. “We need to have a better understanding of what happens in the brain during absence seizures.”

And that is what the researchers achieved in this study. They used a new technology called 2-photon microscopy that allowed them to visualize the firing activity of many individual neurons simultaneously in the brains of awake mice. They combined these observations with electroencephalograms that measured the electrical patterns of the same area of the brain. The results were completely unexpected.

‘It’s like listening to an orchestra without a conductor’

Researchers have known for decades that people having an absence seizure present with a typical electroencephalogram showing a spike-and-wave pattern of electrical activity that repeats for the duration of the seizure.

“The spike-and-wave pattern is very reproducible, and it’s during this period of time that the child would stop and stare. But nobody had studied what the brain cells themselves were doing during one of these episodes,” said co-author Dr. Jeffrey Noebels, professor of neurology, neuroscience, and molecular and human genetics and director of the Blue Bird Circle Developmental Neurogenetics Laboratory at Baylor.

The researchers took a closer look at the firing activity of neurons in an area of the visual cortex of a genetic mouse model of absence epilepsy. They used the new 2-photon microscopy technology to see the firing activity of many brain cells at the same time, in a way similar to people using Google maps to zoom in to look at a group of individual houses in a neighborhood. 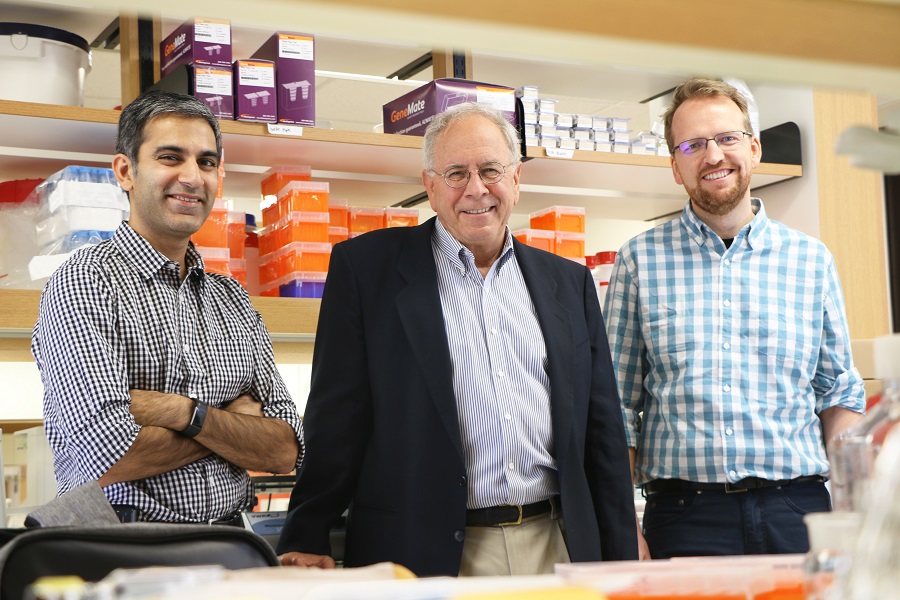 Dr. Atul Maheshwari is on the left, accompanied by Dr. Jeffrey Noebels in the middle and Dr. Jochen Meyer. Credit: Baylor College Medicine

“We had predicted from the spike-and-wave pattern of the brain waves that the behavior of the brain cells during a seizure also would be a rhythmical activity. Instead, we saw an uncoordinated firing activity, which was a big surprise,” said Noebels, who also holds the Cullen Endowed Chair in Neurogenetics. “It was always thought that during the ‘spike’ cells would fire, and during the ‘wave’ they would be quiet. That repeated pattern of spike-and-wave is the signature of this kind of epilepsy, so we assumed that it was based on the behavior of the cells that were generating the brain waves. But in fact we found that there appears to be no uniform connection between the cell behavior and the brain waves.”

“Normally the human brain, like an orchestra, is playing beautiful music and every player can understand what the others are playing. We thought that when a seizure started, the ‘orchestra of neurons’ would play extremely loud and intense music. And when the seizure ended, the neurons would go back to playing monotonous music,” Maheshwari said. “Instead, we found that during an absence seizure the volume of the music went down and the ‘musicians’ were playing music without coordinating with others. Most of them were not playing at all, as if the conductor was not there anymore. When the seizure ended, it was like the conductor had returned and organized the musicians to play harmoniously again.”

Interestingly, the reduction in brain cell activity began several seconds before the rhythmic spike-and-wave signature in the electroencephalogram started.

“It might be of interest in the future to further investigate whether the reduction in cellular activity that precedes the seizures could be used to predict them,” Meyer said.

The researchers’ contribution to the field of epilepsy has opened a window into the cellular events that occur in the brain during absence seizures.

“Now that we know that the ‘orchestra’ is disorganized, we can look for ways to treat the underlying causes of the seizures at the cellular level,” Maheshwari said.