Artificial Light Is Becoming Bluer. That Has Consequences for Our Sleep.

Ruairi is a senior science writer at Technology Networks. He holds a Master's degree in clinical neurosciences from the University of Cambridge and has written for Technology Networks since 2018.
Learn about our editorial policies
Credit: NASA/ESA/A. Sanchez de Miguel et. al.

Complete the form below and we will email you a PDF version of "Artificial Light Is Becoming Bluer. That Has Consequences for Our Sleep."

An innovative project featuring the first composite nighttime color maps of the Earth’s surface has revealed the extent of the shift in the color spectrum that our after-dark light has undergone in the last decade.

The study, published in Science Advances, also warned of the numerous effects that an increase of blue light can have on ecosystems, animal species and humans.

Color eye in the sky

There are nearly 1,000 Earth observation satellites in orbit, fulfilling a variety of roles. Some have sensors for radar or infrared imaging; others send back important meteorological information. But few of these satellites, says Alejandro Sánchez de Miguel, a researcher at the Complutense University of Madrid and first author of the new study, image the Earth as our eye might perceive it. “Many people don’t know that the atlas of the Earth at night that NASA published is “fake”, because they color it with yellow, but the true image is black and white,” he says.

Satellite cameras designed to monitor weather systems have not traditionally separated incoming light into different spectra and are largely insensitive to the blue part of the visible light spectrum. Our nighttime light has been changing rapidly, but there have been no satellite eyes available to see it. 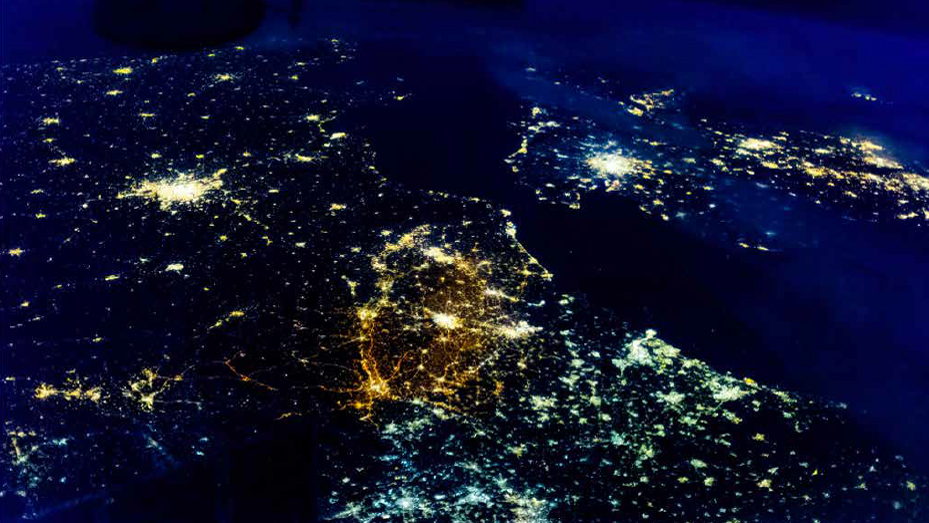 A view over Belgium at night. The UK is in the top right, with Belgium in the center, France on the left, the Netherlands on the right and the blue of Germany at the bottom. Credit: NASA/ESA/A. Sanchez de Miguel et. al.

But satellites aren’t the only cameras in space. Astronauts aboard the International Space Station (ISS) are often issued with digital single lens reflex (DSLR) cameras in order to take images of the Earth’s surface. Sanchez explains that these images are mainly for outreach purposes, but that a stock of over one million photos taken of the Earth at night by astronauts are available.

The research team downloaded a subset of these images, located with the help of the citizen science program Cities at Night, that covered Europe. The team then processed them to measure the ratio of blue-to-green and green-to-red light emitted by artificial light at night (ALAN). This is an umbrella term that includes electric streetlighting and other outdoor light sources.

The researchers pored through the data from two time periods – 2012–2013 and 2014–2020. Over this time, Europe’s lighting has rapidly changed. Light-emitting diode (LED) streetlight technology has become commonplace in some, but not all countries.

The images produced starkly display these differences. Post-2013, the UK emission spectra has become a vivid blue, whereas Germany, (which the authors write has a particularly conservative approach to lighting), remains colored in red and green.

This change in lighting has had benefits – streets are now more well-lit, with the color emitted by LED better matching that picked up by the human eye – but the shift could potentially have negative impacts on our ecosystems.

“First,” says Sanchez de Miguel, “the skyglow is more scattered because of Rayleigh scattering – that’s basic physics.” Rayleigh scattering is a physics principle that determines how widely light of different wavelengths scatters through our atmosphere. Light of shorter wavelengths – in particular blue and violet light – is more strongly scattered. The blue color we see in our daytime sky is a combination of all the scattered shades of light. Increased blue light emitted at night will be scattered further away, potentially reaching species unused to night light.

The authors write that there are numerous consequences that such changes could have on our ecosystems. For example, predators may shift their habitats to find darker spaces, altering where they hunt. Animals’ flying patterns may change – with light-attracted insects like moths particularly affected. One significant change likely to affect humans is the suppression of an important hormone, melatonin.

Our bodies expect blue light during the day, but changes to our lifestyle, combined with shifts in nighttime lighting, are flipping our bodies’ hormonal scripts. “The problem of the light is not so much the light itself but the timing. We really need more blue light during the day,” says Sanchez de Miguel. Instead, our bodies are receiving far more blue light at a higher intensity than produced by natural sources like moonlight. This blue light suppresses the production of melatonin, making sleep harder to come by. Some researchers even link excessive nighttime blue light to a host of medical conditions such as cancer and obesity.

The research team did not measure whether people in countries with higher nighttime blue light had poorer sleep or higher rates of health conditions, but such research is at least now possible with the team’s new approach. Sanchez de Miguel is hopeful that more researchers can take advantage of this rich data produced by our astronauts. “The color gives us a new dimension. It’s a bit surprising – we’ve had this technology for more than 20 years, but it’s taken us so long to take advantage of this potential," he concludes.

Advancements For Food and Environmental Testing with the ZenoTOF 7600 System