Botond Roska and his group at the FMI have elucidated how the retina and the visual cortex work together in visual motion perception. They found that cortical cells, which respond preferentially to backward image motion, are dependent on input from direction-selective cells in the retina, while other cortical cells are less dependent on such input.

Detecting the direction of moving objects in the visual scene is of critical importance for animals. The predator seeking to catch its prey and the prey seeking to escape attack each have to perceive the other animal’s direction of motion. Not surprisingly, the visual system comprises several specialized components to perform this task.

In the eye, information on the direction of motion is extracted by dedicated retinal circuits. These consist of starburst cells – a highly conserved cell type – and direction-selective ganglion cells, which respond to visual inputs along one of the four cardinal directions. In the brain, the primary visual cortex also contains direction-selective neurons. However, it has not been well understood how these two components of the visual system work together, and how retinal computations contribute to cortical computations.

To address this question, scientists in Botond Roska’s group at the Friedrich Miescher Institute for Biomedical Research adopted two different approaches. For their first experiments, they used a mouse model of congenital nystagmus, in which a defect in starburst cells leads to the loss of direction selectivity along the horizontal axis in the retina. In a second set of experiments, they disrupted all retinal direction selectivity by genetically ablating starburst cells. Using high-density microelectrode arrays (developed in Andreas Hierlemann’s lab at ETH Zurich) and a two-photon microscope (developed by Balazs Rozsa in Hungary), they then monitored neuronal responses to visual motion in the retina and the visual cortex. 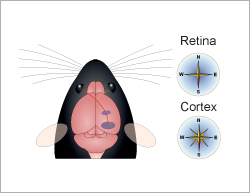 First author Daniel Hillier, a postdoctoral fellow in the Roska lab, explains: “We found an interesting asymmetry in the upper layers of the visual cortex. At fast visual-motion speeds, the proportion of cells that respond to backward visual motion was larger than the proportion of cells that prefer other directions. If you consider that, in an animal with laterally positioned eyes, forward locomotion results in backward image motion, you start to understand the underlying logic: you rarely see a mouse running backwards, falling downwards or flying upwards. Forward locomotion is the most common whole-body motion, so it makes sense that there is an overrepresentation of motion sensors in the brain that detect backward visual motion.”

Interestingly, when direction selectivity was disrupted in the retina, the overrepresentation of cells preferring backward visual motion disappeared. According to Hillier, this indicates that there are two different forms of visual motion computation in the visual cortex: “One form, tuned to backward direction and higher speeds, is dependent on signals computed by the starburst cells in the retina. The other form, covering the different directions more broadly and evenly, is independent of retinal computation.”

The study thus sheds new light on the interplay between retinal and cortical computations of visual motion. Roska comments: “The influence of retinal direction selectivity on cortical direction selectivity in species with laterally positioned eyes, such as mice, is likely an adaptation of their visual system. How the computation of visual motion in the retina and visual cortex is adapted in animals with frontally positioned eyes poses intriguing questions in neuroscience.”

This article has been republished from materials provided by the Friedrich Miescher Institute. Note: material may have been edited for length and content. For further information, please contact the cited source.