Dogs are known to be Man's best friend. No other pet has adjusted to Man's lifestyle as this four-legged animal. Scientists at the Messerli Research Institute at the Vetmeduni Vienna, have been the first to investigate the evolution of dogs' attentiveness in the course of their lives and to what extent they resemble Man in this regard. The outcome: dogs' attentional and sensorimotor control developmental trajectories are very similar to those found in humans. The results were published in the journal Frontiers in Psychology.

Dogs are individual personalities, possess awareness, and are particularly known for their learning capabilities, or trainability. To learn successfully, they must display a sufficient quantity of attention and concentration. However, the attentiveness of dogs' changes in the course of their lives, as it does in humans. The lead author Lisa Wallis and her colleagues investigated 145 Border Collies aged 6 months to 14 years in the Clever Dog Lab at the Vetmeduni Vienna and determined, for the first time, how attentiveness changes in the entire course of a dog's life using a cross-sectional study design.

Humans are more interesting for dogs than objects

To determine how rapidly dogs of various age groups pay attention to objects or humans, the scientists performed two tests. In the first situation the dogs were confronted with a child's toy suspended suddenly from the ceiling. The scientists measured how rapidly each dog reacted to this occurrence and how quickly the dogs became accustomed to it. Initially all dogs reacted with similar speed to the stimulus, but older dogs lost interest in the toy more rapidly than younger ones did.

In the second test situation, a person known to the dog entered the room and pretended to paint the wall. All dogs reacted by watching the person and the paint roller in the person's hands for a longer duration than the toy hanging from the ceiling. 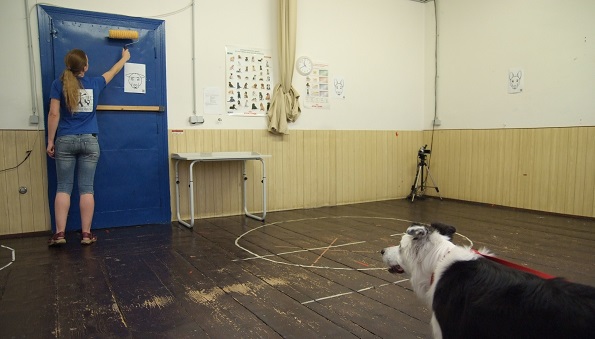 A human with an object is more interesting to watch than an object alone. Lisa Wallis and her scientific animal model are pictured here. Credit: Angela Gaigg

Wallis' conclusion: "So-called social attentiveness was more pronounced in all dogs than "non-social" attentiveness. The dogs generally tended to react by watching the person with the object for longer than an object on its own. We found that older dogs - like older human beings - demonstrated a certain calmness. They were less affected by new items in the environment and thus showed less interest than younger dogs."

Selective attention is highest in mid-adulthood

In a further test the scientists investigated so-called selective attention. The dogs participated in an alternating attention task, where they had to perform two tasks consecutively. First, they needed  to find a food reward thrown onto the floor by the experimenter, then after eating the food, the experimenter waited for the dog to establish eye contact with her.  These tasks were repeated for a further twenty trials. The establishment of eye contact was marked by a clicking sound produced by a  "clicker" and small pieces of hot dog were used as a reward. The time spans to find the food and look up into the face were measured. With respect to both time spans, middle-aged dogs (3 to 6 years) reacted most rapidly.

Dogs also go through a difficult phase during adolescence (1-2 years) which affects their ability to pay attention. This phase of hormonal change may be compared to puberty in Man. Therefore, young dogs occasionally reacted with some delay to the clicker test. However, Wallis found that adolescent dogs improved their performance more rapidly than other age groups after several repetitions of the clicker test. In other words, the learning curve was found to be steepest in puberty. "Thus, dogs in puberty have great potential for learning and therefore trainability" says Wallis.

Dogs as a model for ADHD and Alzheimer's disease

As the development of attentiveness in the course of a dog's life is similar to human development in many respects, dogs make appropriate animal models for various human psychological diseases. For instance, the course of diseases like ADHD (attention deficit/hyperactivity disorder) or Alzheimer's can be studied by observing the behavior of dogs. In her current project Wallis is investigating the effects of diet on cognition in older dogs together with her colleague Durga Chapagain. The scientists are still looking for dog owners who would like to participate in a long-term study.