When babies babble to themselves, it might look like they are just muttering nonsense, but they are actually undertaking an essential part of childhood speech development. In humans, babbling using noises that will later become parts of words we use every day, such as “da’da”, has been recognized as essential for language in later life.

Babbling has been poorly studied in mammals other than humans – could an activity that is so basic and essential to healthy human brain development really be absent elsewhere?

A new study published in Science by researchers in Germany and Panama suggests that humans and pygmy marmosets might be joined by a third species of mammalian babblers – the greater sac-winged bat (Saccopteryx bilineata). The study has shown in detail that bat babbles hold all of the features essential to human babbling.

Tracking down the babbling bats

While human baby babbling can be heard in creches and cafes around the world, getting a recording of S. bilineata is slightly more involved. These bats live wild in the jungles of Central and South America, and acquiring study data proved an arduous task for lead author Dr. Ahana A. Fernandez, a postdoctoral researcher at the Museum of Natural History Berlin.

“In Panama and Costa Rica, locations where we have worked with these bats for years, I basically get up before sunrise,” explains Fernandez, in an interview with Technology Networks. “I take my recording equipment, which is composed of a special microphone that can record ultrasonic vocalizations and I walk into the forest.” Once there, Fernandez would sit in front of a tree known to shelter bats, where she would remain throughout the nocturnal bats’ daytime roost, recording until they left again at sunset to go hunting for insects. 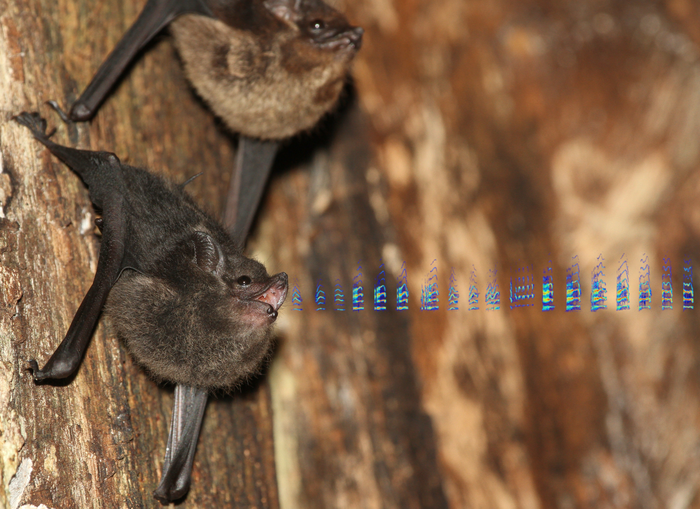 Fernandez began investigating bats after preliminary research conducted by her supervisor, Dr. Mirjam Knörnschild, head of the Behavioral Ecology and Bioacoustics Lab at The Museum of Natural History Berlin, identified how eerily similar baby bat sounds are to infant babbling. While the team had shown that bats learn using mimicry of adult noises, no in-depth study had yet revealed the intricacies of bat babbling.

Fernandez listened in on the babbling sounds of 20 bat pups, recording over 55,000 syllables over 216 different bouts of babbling. These bouts, multisyllabic squeaks that can easily be detected by the human ear, could last for up to 43 minutes. While this gargantuan task required some extreme patience, Fernandez clearly relished the study. “I think maybe it sounds boring, but it isn’t at all – babbling behavior is very interactive – pups interact with their moms. You have to be really focused and dedicated to that, because you have to take notes, [observing] what is happening, who is interacting with whom. It’s fascinating because I am allowed to study completely wild animals in an undisturbed setting. I think this is an amazing approach to study bats.”

Listen to babbling baby bats in this video. Credit: Science via YouTube

In recording these bats, Fernandez keenly noted not only the participants involved in babbling – sometimes pups alone, sometimes with their mothers – but the exact types of sound being produced. Her analysis assessed whether pup babbling had any of the eight different features of baby babbling:

Remarkably, the bat pups’ noises had all eight of these features. In particular, the universality of babbling – both male and female bats took part – was a surprise to Fernandez. “Adult females do not produce the major part of the adult vocal repertoire so although they learn it they don’t produce it, so only the males are singing and only the males are tutors.” In their discussion, the authors suggest that female pups learn the repertoire as a preparation for assessing the quality of future mating songs directed at them.

To babble or not to babble?

But while Fernandez’s findings represent an exhaustive account of how S. bilineata, the question of whether babbling is a universal activity among other vocally communicative animals remains unsolved. “Is babbling a prerequisite for vocal learning and for acquiring a large vocal repertoire?” asks Fernandez. “So far, we haven’t seen any species that is capable of vocal imitation that does not babble. But on the other hand, we have non-vocal learners that babble.”

Will the team’s hypothesis that babbling is essential to vocal learning hold? Fernandez makes clear that it will require much more careful, thrilling study of animals in their natural settings. “We have to still discover more species that babble, because babbling is so rare, so far,” she concludes.