Ruairi is a senior science writer at Technology Networks. He holds a Master's degree in clinical neurosciences from the University of Cambridge and has written for Technology Networks since 2018.
Learn about our editorial policies
Credit: Raspopovic lab
Read time:

Complete the form below and we will email you a PDF version of "Best Foot Forward: Advanced Artificial Limb Research Wins Neuromodulation Prize"

The 2021 Science & PINS Prize for Neuromodulation has been awarded to Professor Stanisa Raspopovic, whose innovations in neurotechnology have led to a promising new class of artificial legs that could lead to an improved quality of life for amputees.

The prize is awarded to the author of a 1500-word essay that describes outstanding research published over the previous three-year period. Raspopovic spoke to Technology Networks just before his award was announced.

One of the remarkable facts about neuroprosthesis research is that, despite a large portion of headline-grabbing research focusing on innovative robotic arms, legs represent four out of five lost limbs. “I believe that the focus on upper limb amputation was because of the human fascination with the hand,” says Raspopovic. The rise of peripheral arterial disease, such as diabetes, has seen the number of lower limb amputations far outstrip that of upper limbs.

There are also more clinical options available for upper limb amputees. “You can do well with a static solution or with the use of the residual arm,” says Raspopovic, whereas individuals who have lost a leg need a mobile prosthesis to restore function. 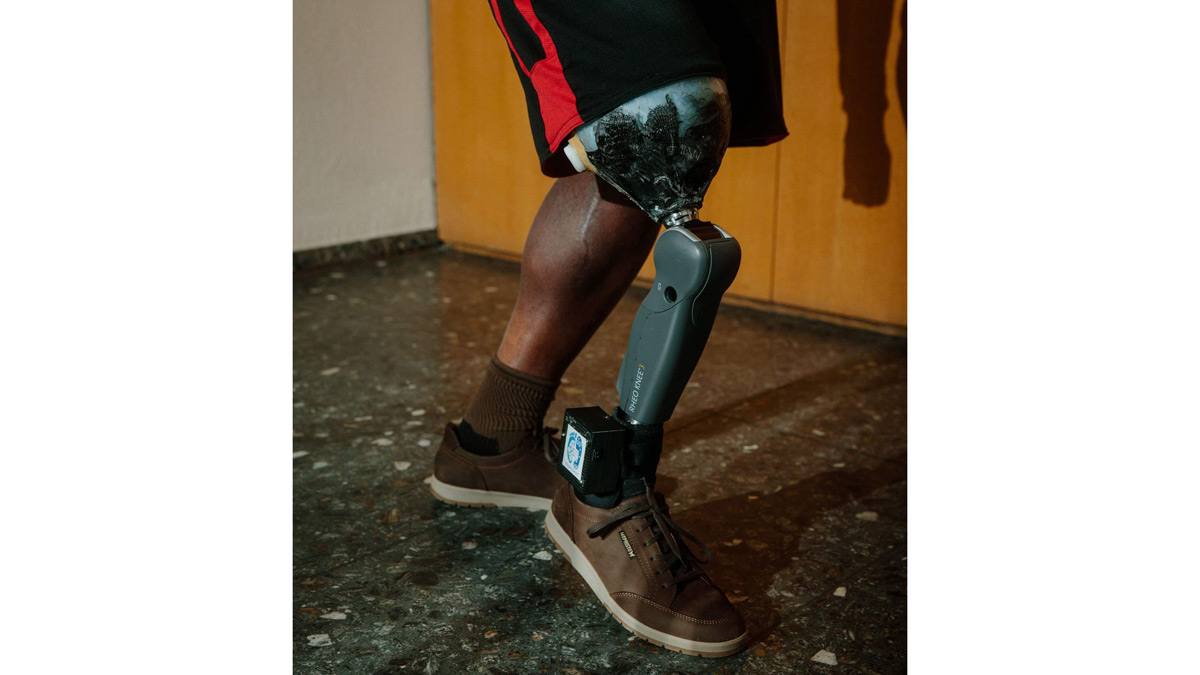 The leg (pictured) aims to improve upon traditional prosthetics by increasing the felt sense of embodiment that users experience. Credit: Raspopovic lab

Raspopovic explains that previous eye-catching advances in robotics and mechanical design meant that the bottleneck in prosthesis innovation wasn’t in how the device itself functioned, but how it connected to the brain: “We tried to design a device that would enable intuitive contact with the residual nervous system,” he says.  “This is what patients want. They don’t want a device that they have to train to use, they want to use it intuitively.”

His team created a bespoke approach for the design of neuroprostheses that is laid out in his essay. Rather than starting with an amputated limb, the team looked first at intact limbs, carefully studying the connections between brain and peripheral nerves This helped map out exactly which nerves contributed to normal gait and movement. This allowed them to very precisely design implanted electrodes to stimulate targeted areas of the nervous system. In doing so, they created a sensory experience for users of the prosthesis that naturally mimics the feeling of an intact leg.

“We managed to create a language of stimulation that is appropriate to speak to the nervous system. This took a decade of research in reality,” Raspopovic explains.

The resulting “sensing leg” connects sensors in an artificial knee and foot to the residual peripheral nervous system. A wireless external controller device reads the pressure signals produced from the prosthesis and delivers a corresponding series of stimulations to the nerves of the user’s residual leg.

By running a delay that is imperceptible to the user, Raspopovic’s leg recreates natural feelings of touch and pressure for the user. The study showed that the connection was so reliable that even when the leg was removed from the user, they could tell if the limb was touched in different places or flexed. Users’ ability to navigate difficult terrain was also substantially improved.

Reducing the risk of heart attack

The system had benefits beyond simply restoring movement. Amputees using traditional prostheses suffer from one condition that may not be readily apparent – an increased risk of heart disease brought on by increased metabolic load when walking. “They suffer because their biomechanics are irregular,” says Raspopovic. “You can see even when they are just climbing a staircase, they will be significantly more fatigued when compared to a non-amputee.” By restoring the sensation of normal gait, users of Raspopovic’s device were able to command more efficient movements and reduce their metabolic effort.

Amputees regular suffer the alien and often intractable burden of phantom limb pain (PLP), where uncomfortable sensations emanate from a limb that is no longer there. Raspopovic’s implanted electrode system could be set to a “neuro-pacemaker modality”, where it released signals to the residual nerve that were able to reduce PLP. By focusing on stimulation that more naturally mimicked signals produced from an intact limb, Raspopovic’s essay suggests that the system can remodel the peripheral and central nervous system to bring about a curative, rather than just painkilling, effect on PLP.

But the biggest benefit of the system is not one that can be measured on a pain scale or in number of steps walked. Rather, it was the improvement in how the patients saw the artificial limb as part of their own bodies that made the biggest difference. Traditional prostheses, despite typically being less than half the weight of a flesh and bone leg, are often described as being uncomfortably heavy by users. Increased cognitive load when using these older prostheses show that the nervous system struggle to incorporate its new biomechanical component. In contrast, users reported improvements both to the “weight” of Raspopovic’s limb and showed reduced cognitive load when using it.

While Raspopovic’s essay discusses the societal benefits of a prosthetic system that could restore natural movement while reducing pain and cardiovascular burden, his greatest motivation is the benefits that his designs have given to individual patients. A survey distributed to patients who had used his system showed widespread satisfaction. In response to one question, "What would provide the biggest benefit?" one user simply said, “This prosthesis, ready.”

Raspopovic is looking forward to increasing financing for the project to make the prostheses available to all who could benefit from it. “I really like the part of the job where we are helping somebody. It’s what is pushing us forward. I wouldn’t do anything in life rather than this work,” he concludes.