Using a succession of biological mechanisms, Sandia National Laboratories researchers have created linkages of polymer nanotubes that resemble the structure of a nerve, with many out-thrust filaments poised to gather or send electrical impulses.

Sandia co-researcher Wally Paxton said, "This is foundational science, but one possibility we see, way down the road, is to use soft artificial structures like these to painlessly interface with the body's nerve structures."

Currently, rigid electrodes that cause inflammation are used to penetrate nerve tissue trying to communicate with an artificial limb, he explained. Instead, in a future application, the polymer network could be used extend the nerve, providing a gentler prosthetic interface.

Creation of the neural structure, unachievable by normal manufacturing techniques, begins by altering the behavior of kinesin motor proteins -- biological machines found in every human cell. These tiny motors normally tote material from one part of a cell to another, carrying them on what, in video graphics, is portrayed as a vertical body with two legs. These stride along protein microtubules that form the cell structure. The purposefulness of the motors resembles that of the spellbound brooms in Disney's Fantasia, relentlessly carrying buckets of water up the castle stairs. 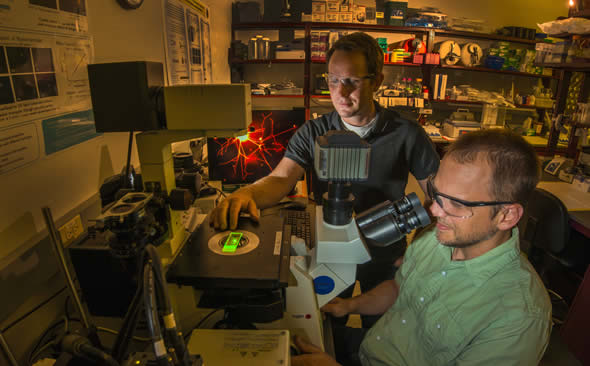 Turning natures' machinery on its head, the researchers used known techniques to glue the "shoulders" of kinesin motors to a glass substrate. This prevents their bodies from traveling, but their "legs" above them continue their vigorous movements. These pass microtubules above them, like an audience crowdsurfing entertainers on upraised hands.

In the next laboratory step, these traveling protein microtubules, microns in length, encounter relatively large polymer spheres, tens of microns in diameter, inserted by the researchers.

The microtubules, pre-coated with a sticky substance, pinch off polymer nanotubes from the sphere that lengthen as the kinesin motors travel on. The process resembles stringy strands of cheese lengthening as a piece of pizza is removed from a pan, said Paxton.

As the nanotubes lengthen and crosslink, they form structures complex enough to bring to mind the lights of a city seen at night from an airplane at high altitude. The networks range from hundreds of micrometers to tens of millimeters in total size and are composed of tubes 30 to 50 nanometers in diameter. 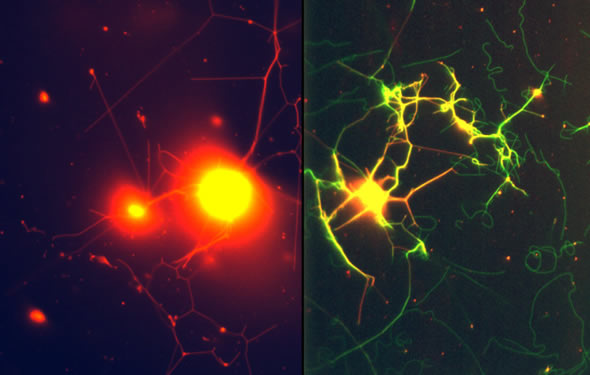 In these fluorescent microscopy images, the red image, left, shows only polymer nanotubes while the green image shows protein microtubules as well. Because polymer microspheres absorb more fluorescent dye than the nanotubes, the spheres are brighter. Each center "node" of the networks is about 20 microns in diameter, and some of the tubes are longer than 100 microns. Courtesy: Sandia National Laboratories

"One goal of our work is to make an artificial, highly branched neural structure," said Bachand. "The next step is, can we wire them together? The answer is, the motors should do it naturally. And two such networks, joined together, would have self-healing built into them. The motors never stop running until they run out of fuel. A neural branch breaks, and then a motor can act on that area to produce a new branch."

The insertion of quantum dots also proved stable, which means that light could be used to carry information through the structure as well as electricity.