Complete the form below and we will email you a PDF version of "“Bionic eye” 3-year clinical trial results prove safety, efficacy of vision-restoring implant"

The three-year clinical trial results of the retinal implant popularly known as the “bionic eye,” have proven the long-term efficacy, safety and reliability of the device that restores vision in those blinded by a rare, degenerative eye disease. The findings show that the Argus II significantly improves visual function and quality of life for people blinded by retinitis pigmentosa. They were published online June 23 in Ophthalmology, the journal of the American Academy of Ophthalmology.

Retinitis pigmentosa is an incurable disease that affects about 1 in 4,000 Americans and causes slow vision loss that eventually leads to blindness. The Argus II system was designed to help provide patients who have lost their sight due to the disease with some useful vision. Through the device, patients with retinitis pigmentosa are able to see patterns of light that the brain learns to interpret as an image. The system uses a miniature video camera stored in the patient’s glasses to send visual information to a small computerized video processing unit which can be stored in a pocket. This computer turns the image to electronic signals that are sent wirelessly to an electronic device implanted on the retina, the layer of light-sensing cells lining the back of the eye.

The Argus II received Food and Drug Administration (FDA) approval as a Humanitarian Use Device (HUD) in 2013, which is an approval specifically for devices intended to benefit small populations and/or rare conditions. 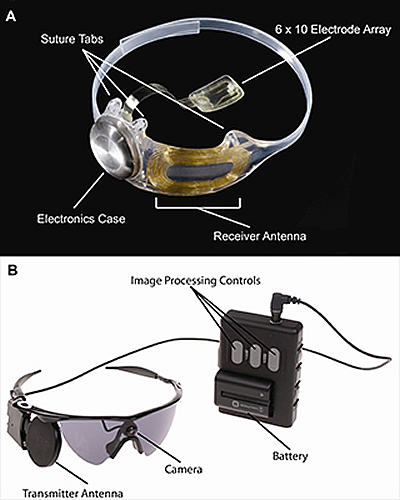 To further evaluate the safety, reliability and benefit of the device, a clinical trial of 30 people, aged 28 to 77, was conducted in the United States and Europe. All of the study participants had little or no light perception in both eyes. The researchers conducted visual function tests using both a computer screen and real-world conditions, including finding and touching a door and identifying and following a line on the ground. A Functional Low-vision Observer Rated Assessment (FLORA) was also performed by independent visual rehabilitation experts at the request of the FDA to assess the impact of the Argus II system on the subjects’ everyday lives, including extensive interviews and tasks performed around the home.

The visual function results indicated that up to 89 percent of the subjects performed significantly better with the device. The FLORA found that among the subjects, 80 percent received benefit from the system when considering both functional vision and patient-reported quality of life, and no subjects were affected negatively.

After one year, two-thirds of the subjects had not experienced device- or surgery-related serious adverse events. After three years, there were no device failures. Throughout the three years, 11 subjects experienced serious adverse events, most of which occurred soon after implantation and were successfully treated. One of these treatments, however, was to remove the device due to recurring erosion after the suture tab on the device became damaged.

“This study shows that the Argus II system is a viable treatment option for people profoundly blind due to retinitis pigmentosa - one that can make a meaningful difference in their lives and provides a benefit that can last over time,” said Allen C. Ho, M.D., lead author of the study and director of the clinical retina research unit at Wills Eye Hospital. “I look forward to future studies with this technology which may make possible expansion of the intended use of the device, including treatment for other diseases and eye injuries.”