Auditory hallucinations, a phenomenon in which people hear voices or other sounds in the absence of external stimuli, are a feature of schizophrenia and some other neuropsychiatric disorders. How they arise in the brain has been unclear, but new research indicates that altered brain connectivity between sensory and cognitive processing areas may be responsible.

Using magnetic resonance imaging (MRI), the researchers compared brain structures and their connectivity in 110 healthy control subjects and in 120 subjects with a genetic disorder, named 22q11.2 deletion syndrome, or DS. People with 22q11.2 DS are at far higher risk than the general public to develop schizophrenia and to experience sensory hallucinations. An estimated one percent of people with schizophrenia have this disorder.

Abnormalities in the thalamus, a brain region recognized as the “gateway” for sensory information coming into the brain, had already been implicated in schizophrenia and hallucinations. In the current study, the authors sought to parse more specifically how the thalamus and its connections to other brain areas differed in people with 22q11.2 DS – with and without auditory hallucinations (AH) – from the control group. For this longitudinal study, the researchers collected brain scans every three years from subjects aged 8 to 35, with each receiving between 1 and 4 scans. 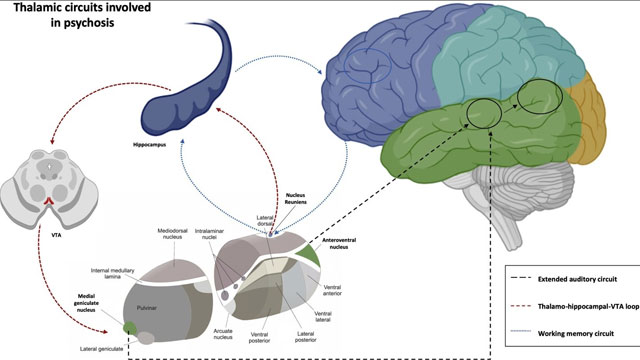 Depiction of a working theory on the thalamic circuitry that is involved in psychotic symptoms in individuals with the genetic disorder, 22q11 deletion syndrome. Credit: Elsevier, 2020 (Creative Commons license, CC-BY).

While neither the total volume of the thalamus nor its developmental growth trajectory differed between 22q11.2 DS and control subjects, the researchers found differences in specific thalamic sub-nuclei. The medial and lateral geniculate nuclei (MGN, LGN), which are involved in relaying auditory and visual sensory information, were smaller in people with 22q11.2 DS. In contrast, thalamic nuclei that communicate with the frontal cortex, which is involved in higher cognitive functions, were larger in 22q11.2 DS subjects than in healthy controls. In addition, other thalamic nuclei developed differently in the two groups.

When comparing 22q11.2 DS subjects with and without AH, those with AH had a smaller volume of MGN and a different developmental trajectory.

Upon assessing functional connectivity within the brain, the authors also found that subjects with AH had greater connectivity between MGN with the auditory cortex and other language-processing areas. They postulate that such hyper-connectivity might underlie the activation of such auditory areas at rest, leading to hallucinations.

“These findings provide a mechanistic explanation to the extreme likelihood of hallucinatory phenomena in youths prone to psychosis due to 22q11.2 deletion syndrome,” Dr. Mancini added. “Further, the investigation of the developmental interactions between the thalamus and the cortex may help to identify new targets for intervention aimed at preventing the emergence of psychotic symptoms in individuals at-risk due to genetic conditions or clinical ultra-high-risk status.”

Cameron Carter, MD, Editor of Biological Psychiatry: Cognitive Neuroscience and Neuroimaging added: “This study of individuals with 22q11 may provide a unique window into the alterations in brain development that underlie the development of psychotic symptoms, as well as other developmental and cognitive problems in these young people.”

This article has been republished from the following materials. Note: material may have been edited for length and content. For further information, please contact the cited source.
Related Topic Pages
Neurogenomics
Neuroimaging
Behavioral Neuroscience
Advertisement
Chosen for You
Article