Complete the form below and we will email you a PDF version of "From brain, to fat, to weight loss"

Weight is controlled by the hormone leptin, which acts in the brain to regulate food intake and metabolism. However, it was largely unknown until now, how the brain signals back to the fat tissue to induce fat breakdown. Now, a breakthrough study led by Ana Domingos at Instituto Gulbenkian de Ciência (IGC; Portugal), in collaboration with Jeffrey Friedman's group at Rockefeller University (USA), has shown that fat tissue is innervated and that direct stimulation of neurons in fat is sufficient to induce fat breakdown. These results, published in the journal Cell, set up the stage for developing novel anti-obesity therapies.

Fat tissue constitutes 20 to 25% of human body weight being an energy storage container, in the form of triglycerides. Twenty years ago Jeffrey Friedman and colleagues identified the hormone leptin, which is produced by fat cells in amounts that are proportional to the amount of fat, and informs the brain about how much fat is available in the body. Leptin functions as an "adipostat" neuro-endocrine signal that preserves body's fat mass in a relatively narrow range of variation. Low leptin levels increase appetite and lower basal metabolism, whereas high leptin levels blunt appetite and promote fat breakdown. However, until now it was largely unknown what circuits close the neuroendocrine loop, such that leptin action in the brain signals back to the fat. 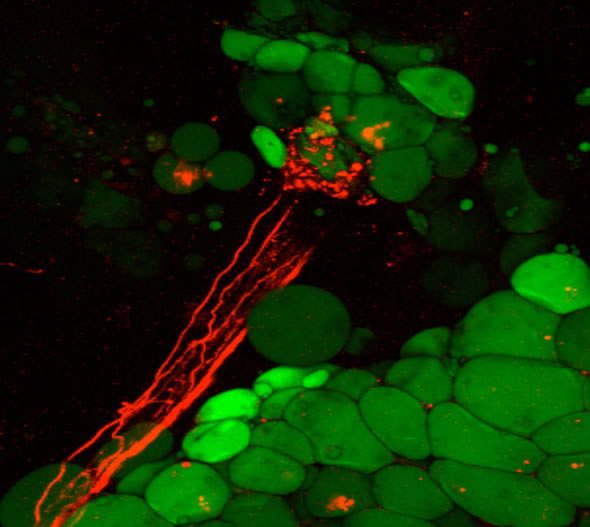 Now, the research team led by Ana Domingos, combined a variety of techniques to functionally establish, for the first time, that white fat tissue is innervated. "We dissected these nerve fibers from mouse fat, and using molecular markers identified these as sympathetic neurons", explains Ana Domingos. But most remarkable, "when we used an ultra sensitive imaging technique, on the intact white fat tissue of a living mouse, we observed that fat cells can be encapsulated by these sympathetic neural terminals".

Next, researchers used genetic engineered mice, whose sympathetic neurons could be activated by blue light, to assess the functional relevance of these fat projecting neurons. Roksana Pirzgalska, a doctorate student in Domingos' laboratory and co-first author of the study explains: "We used a powerful technique called optogenetics, to locally activate these sympathetic neurons in fat pads of mice, and observed fat breakdown and fat mass reduction." Ana Domingos adds: "The local activation of these neurons, leads to the release of norepinephrine, a neurotransmitter, that triggers a cascade of signals in fat cells leading to fat hydrolysis. Without these neurons, leptin is unable to drive fat-breakdown". The conclusions and future directions are clear according to Ana Domingos: "This result provides new hopes for treating central leptin resistance, a condition in which the brains of obese people are insensitive to leptin." Senior co-author Jeffrey Friedman adds: "These studies add an important new piece to the puzzle that enables leptin to induce fat loss".