Complete the form below and we will email you a PDF version of "Brain FM: Purkinje cells sing different tunes"

All of us have our moods when we like to whistle an old melody or feel like tapping our feet to the latest hit. It turns out that cells in our brains can be equally moody, changing the tune of their electrical signals from time to time. In a new study, Mohini Sengupta and Vatsala Thirumalai, from the National Centre for Biological Sciences (NCBS), Bangalore, demonstrate that nerve cells found at the base of the brain in the cerebellum send out electrical signals in either a constant hum or in sudden bursts. Which of the two tunes they choose depends on the voltage across their cell membranes and on inputs from a specific region of the brain under certain conditions.

The cerebellum, a small leaf-like structure at the base of our brain, is important for controlling balance, coordination and for learning new motor skills such as riding a bicycle or playing a piano. Purkinje cells are arranged neatly in a single layer within the cerebellum and are essential in carrying out the aforementioned functions. Purkinje cells receive signals from many different regions of the brain and then send out messages to the deeper layers of the cerebellum.

How Purkinje cells communicate with other nerve cells, has thus far been a mystery, mainly because it is difficult to 'listen' to these cells in animals that are awake and moving around. These nerve cells are very small and scientists employ very fine instruments to record their electrical signals in experiments that require animals to be anesthetised, as even small movements can knock the equipment out of place. Unfortunately, the anaesthetics themselves can alter the electrical signals generated by the brain. Therefore, previous studies on the signals generated by Purkinje cells in awake and moving animals have been inconclusive. 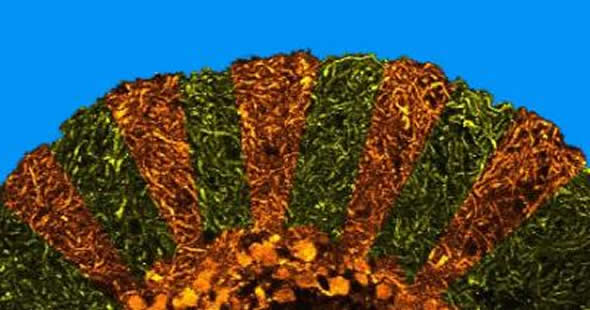 The team at NCBS circumvented these issues by carrying out their research on the zebrafish whose young are transparent with an undeveloped skull. Furthermore, specific nerve cells in these fish can be made to glow by injecting DNA into them. This made it possible for the scientists to insert and precisely place fine recording equipment onto the Purkinje cells within the fish brains. To prevent the fish from moving, a paralytic agent that does not interfere with electrical signals in the brain was used. This combination of techniques allowed researchers to record electrical signals from Purkinje cells in an animal that was not anesthetized.

Results from these experiments at NCBS showed that Purkinje cells send out electrical signals in two different modes depending on the voltage at their cell surfaces. The first mode, called the 'down' state, occurred when the inside of the cell was more negative compared to the outside. In this state, cells were silent until signals from a different part of the brain arrived, at which time, they sent out a burst of impulses. In the second mode, called the 'up' state, the inside of the cell was less negative compared to the outside and Purkinje cells sent out impulses at a constant rate. In this mode, these cells ignored any impulses coming from other parts of the brain. These states are reminiscent of a person attentively listening to directions and responding accordingly, or simply 'zoning out' and going their own way irrespective of instructions.

What does this phenomenon mean for the functioning of the cerebellum? To understand this, the scientists at NCBS recorded the instructions sent out by the nervous system to muscles. Their results indicate that Purkinje cells receive a copy of the instructions sent to muscles and that they generate a burst of impulses in response. The researchers propose that the existence of the 'up' and 'down' states could be a mechanism by which Purkinje cells 'choose' to listen in on such instructions or not. What do these cells do with the instruction copy? Do they alter their signals when the animal is learning new motor tasks? The authors are excited to find out answers to these questions in ongoing experiments.