Complete the form below and we will email you a PDF version of "Brain tumors: Mapping of motor areas in the brain by magnetic stimulation"

Millimeter by millimeter towards a better prognosis for brain tumors

A method known as navigated transcranial magnetic stimulation (nTMS) has been gaining importance in neurosurgery for some time now. Among other applications, it is used to map brain tumors before an operation and to test whether important regions of the brain, for example motor and language areas, are affected. Doctors at the Technische Universität München (TUM) have now shown that preoperative nTMS analysis of motor areas improves the prognosis of patients with malignant brain tumors.

With the help of nTMS, it is possible to identify what areas of the brain control motor or language function to an accuracy of four millimeters. “That’s particularly important, as it enables the removal of tumors from patients without affecting functional areas while at the same time removing as much of the malignant tissue as possible,” explains Dr. Sandro Krieg, working group leader at the Department of Neurosurgery of TUM University Hospital Klinikum rechts der Isar and head of the study. Mapping must be performed separately for each patient, as tumors can displace important brain areas from their original sites.

To determine motor areas with the nTMS technique, the physician scans points at defined positions on the patient’s head using a coil. The coil induces brief painless electrical pulses in the brain, which stimulate brain neurons at those positions. If the pulses at a given position point activate neurons that trigger muscle movements, the scientists are able to measure the muscle activities with the help of electrodes fastened to the patient’s arms and legs. That position is then regarded as an essential location for motor activity.

Up to 150 individual position points per patient can be analyzed and mapped. “In this way, we can draw up a map of important motor areas and nerve pathways in the vicinity of the tumor. During the operation, this data is a good guide as to where we can and cannot cut,” explains Krieg. The method has been used at Klinikum rechts der Isar since 2010. 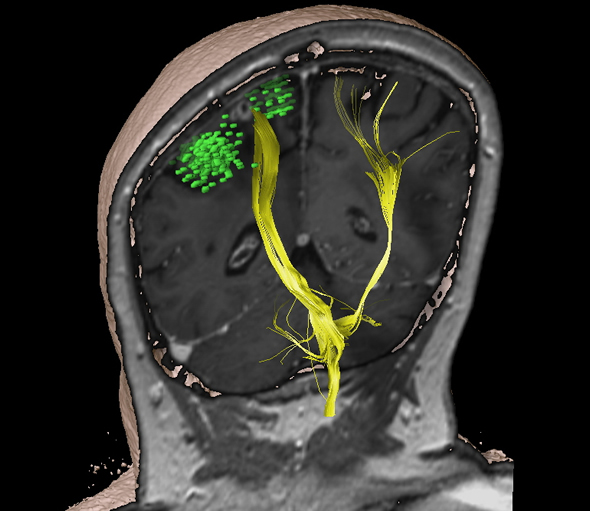 MRT- and nTMS-map: The mapping data is also used for intraoperative three-dimensional neuronavigation. This tells the neurosurgeon precisely where he or she is at all times on the basis of MRI images. The nTMS mapping data obtained (green) is also used for intraoperative three-dimensional neuronavigation. With the help of special MIR sequences, the data is also used to calculate the motor pathway (yellow). In this case, it can be seen that no motor function is located in the area around the tumor (the white structure between the green areas) and that the tumor has been removed in its entirety. Credit: Sandro Krieg / TUM

In their recent study, Sandro Krieg and his team scanned and mapped motor areas in patients with high-grade gliomas (HGG), which are usually associated with a poor prognosis. They compared two groups: 70 subjects who underwent preoperative nTMS analysis and 70 patients who underwent tumor surgery before nTMS became a standard procedure in the hospital. The results of the study show the advantage of nTMS mapping for patients compared to the control group: smaller openings in the skull had to be made in patients who underwent nTMS tumor analysis, and residual tumor tissue was left behind less frequently. In addition, their average hospitalization period was two days shorter. Because the general state of health of the nTMS-treated patients was also better, an increased number of them were subsequently able to receive radiotherapy. Above all, those patients survived several months longer than the control group.

“Of course, we need to confirm the findings in larger patient groups, but one important thing is clear: preoperative tumor mapping positively influences many aspects of the procedure,” Krieg says about the results, adding: “Some tumors that are otherwise thought to be inoperable can be removed by this method.” 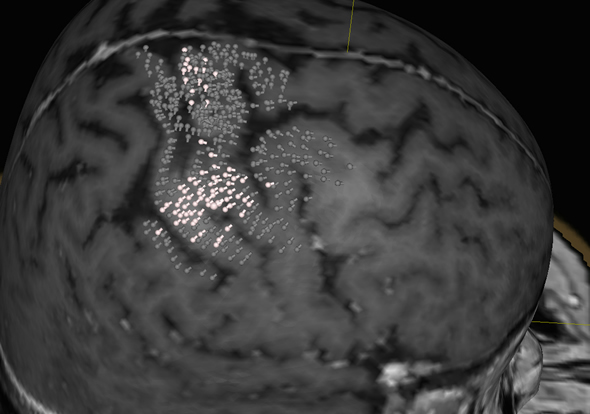 MRT- and nTMS-map of motor areas in the brain: Data from MRI scans are reconstructed in three dimensions by the nTMS mapping system (Nexstim eXimia) to visualize the surface of the brain with all its convolutions. The white points show brain areas containing motor functions; the grey points, brain areas which were examined, but contain no motor function.  Credit: Sandro Krieg / TUM

The scientists now aim to improve standard protocols for nTMS and, for example, the mapping of language areas. In a recent study, they showed that an object-naming test is the best method for analyzing language centers. “Language areas can already be mapped with nTMS, but they’re much more complex than motor areas. We want to create higher standards in order to help patients with tumors in these regions as effectively as possible,” the scientist says.