Can We One Day Remove the Effects of Tiredness on the Brain?

Complete the form below and we will email you a PDF version of "Can We One Day Remove the Effects of Tiredness on the Brain?"

Sleep deprivation can take a heavy toll on our ability to make sound decisions, with potentially disastrous outcomes. With support from a $2.8 million grant awarded by the U.S. Department of Defense, a team of researchers from Washington State University’s Sleep and Performance Research Center will embark on a new three-year research study to find out how exactly this works inside the brain.

Funded through the Congressionally Directed Medical Research Programs, the project will lay the groundwork for the development of new countermeasures to reduce the harmful cognitive effects of sleep deprivation in military operations and other around-the-clock, safety-critical settings.

The research study deals with a function of the brain known as cognitive flexibility, the ability to change our thinking based on new information. Previous studies by members of the WSU research team have found that cognitive flexibility is particularly affected by sleep deprivation, much more so than most other cognitive processes involved in decision-making.

They also identified a gene that predicts how well sleep-deprived people perform on tasks that require cognitive flexibility. This gene is involved in the regulation of dopamine, a chemical messenger in the brain linked to the brain’s control of attention. It is found in a brain area known as the striatum, where its effects are intertwined with another gene, which regulates adenosine, a brain chemical that makes us feel sleepy.

“Scientists have known that the striatum is involved in the regulation of sleep deprivation, but they haven’t previously recognized why it is so important for cognitive performance,” said the study’s lead investigator Hans Van Dongen, director of the Sleep and Performance Research Center and a professor in the Elson S. Floyd College of Medicine. “Based on our earlier findings, we suspect that the striatum — where the systems that regulate dopamine and adenosine interact — causes these cognitive flexibility issues in people who are sleep deprived.”

To test this idea, the research team will conduct human and animal experiments. First, they will develop a task to measure cognitive flexibility in rodents. Subsequently, they will employ the task in a sleep-deprivation experiment in rats. The researchers also will use optogenetics, a technique that allows them to selectively activate neurons with laser light. They will do this to control the activity of neurons in the striatum, which will enable them to see where and how changes in the effects of sleep deprivation on the rats’ cognitive flexibility occur.

During the human study, 90 healthy adult volunteers will each spend three days in the sleep laboratory on the WSU Health Sciences Spokane campus. After a night of normal sleep, the participants will be kept awake the next night, followed by a night of recovery sleep. They will complete a cognitive flexibility task after the first night’s sleep and again 24 hours later while they are sleep deprived. Prior to their second cognitive test, they will take an existing drug that works inside the striatum to fight the effects of sleep loss in general — such as caffeine — or a placebo.

“Based on their genes, we think people will respond differently to the sleep deprivation challenge and to the drug they’re given, which will provide important information about the brain processes involved.” Van Dongen said.

Together, the two experiments will offer critical insight into how sleep loss results in cognitive flexibility deficits, which will provide researchers with a target for future drug development to specifically address cognitive flexibility impairment from sleep loss. This may ultimately benefit anyone working long hours and odd shifts in high-paced, safety-critical environments, such as military operations, emergency response, medical care, and energy production. 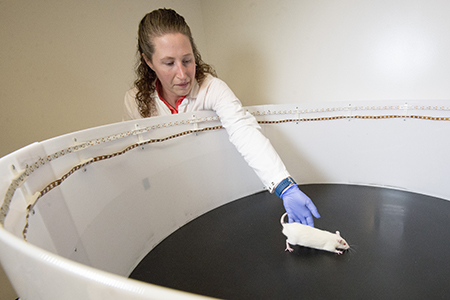 WSU research analyst Michelle Schmidt releases a rat into an open field maze that will be used to test cognitive flexibility in the new study. Through localized vibrations of the maze floor, rats are given spatial orientation cues to motivate them to navigate from a random start location to an unmarked target location.” Photo by Cori Kogan, WSU Spokane.

“Conducting parallel studies with humans and animals is a powerful way to characterize the cognitive deficits due to sleep loss and identify the underlying brain processes,” said study co-investigator Marcos Frank, professor and chair of the Department of Biomedical Sciences in the Elson S. Floyd College of Medicine. “This joint project will open up areas of basic and translational science that will generate new knowledge and improve people’s lives.”