In the first study of its kind, researchers have determined that spending time with horses eases symptoms of Alzheimer's dementia.

A collaboration between The Ohio State University, an equine therapy center and an adult daycare center found that people with Alzheimer's were able to safely groom, feed and walk horses under supervision -- and the experience buoyed their mood and made them less likely to resist care or become upset later in the day.

The small pilot study, which appears in the journal Anthrozoös, suggests that equine therapy -- a treatment used today for children and teens who have emotional and developmental disorders -- could work for adults, too.

Holly Dabelko-Schoeny, associate professor of social work at Ohio State, said that equine therapy could supplement more common forms of animal therapy involving dogs or cats and provide a unique way to ease the symptoms of dementia without drugs.

"We wanted to test whether people with dementia could have positive interactions with horses, and we found that they can -- absolutely," Dabelko-Schoeny said. "The experience immediately lifted their mood, and we saw a connection to fewer incidents of negative behavior."

In addition to memory loss, people with Alzheimer's often experience personality changes, she explained. They can become depressed, withdrawn -- even aggressive. As researchers look for a way to prevent or treat the disease, today's therapies are becoming more focused on how to ease the emotional burden for patients and their families.

"Our focus is on the 'now.' What can we do to make them feel better and enjoy themselves right now? Even if they don't remember it later, how can we help in this moment?" she said.

At the adult daycare center, a National Church Residences Center for Senior Health in downtown Columbus, clients normally partake in crafts, exercise and other activities to manage their dementia. For this study, sixteen of the center's clients who had Alzheimer's -- nine women and seven men -- volunteered to break with their regular routine.

Once a week, eight of the clients would remain at the center and pursue other activities while the other eight took a bus trip to the Field of Dreams Equine Education Center in Blacklick, Ohio. There, they visited with horses under the supervision of National Church Residences caretakers, as well as faculty and students from the College of Social Work and the College of Veterinary Medicine at Ohio State.

The clients visited the farm once a week for a month, so that every participant had four visits total. They groomed and bathed the horses, walked them, and fed them buckets of grass.

The four horses were chosen for their gentle dispositions and calmness when facing new people and new situations. All participate in therapeutic riding programs for children and teens at Field of Dreams. 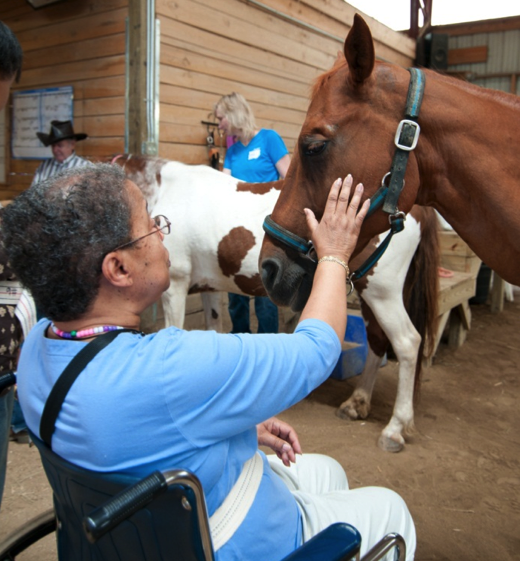 The researchers saw obvious signs that the clients enjoyed their time on the farm: they smiled, laughed and talked to the horses. Even those who normally acted withdrawn became fully engaged in the experience.

There was a clear improvement in dementia-related behavior among the clients who visited the farm. To track behavior, the researchers used a scoring system called the Modified Nursing Home Behavior Problem Scale, in which staff at the center rated the frequency with which the participants fidgeted, resisted care, became upset or lost their temper on days they went to the farm or stayed at the center.

On a scale of zero to four -- zero meaning the client never engaged in the problem behavior, and four meaning that they always engaged in it -- scores for the participants who went to the farm were an average of one point lower than the scores for their peers who stayed at the center. So clients who visited the farm were, on average, better behaved throughout that day.

Through mouth swabs, the researchers also measured the levels of the stress hormone cortisol in the patients' saliva. For participants with less severe dementia, the researchers saw a rise in cortisol levels, possibly due to the "good stress" of being in a new situation.

There was one unexpected benefit, though: the therapy boosted physical activity. The clients all had physical limitations, but when presented with the horses, they were inspired to push the boundaries of those limitations.

Some clients who never wanted to leave their wheelchair asked for help in standing up; others who rarely wanted to walk stood up and walked unassisted, though a caretaker was always there to help them balance. The clients grew more physically active on each visit to the farm.

Family members reported that their loved one remained engaged with the experience even after returning home. One commented to researchers that her mother "would never remember what she did at the center during the day, but she always remembered what she did at the farm."

While much study has gone into animal therapy as a treatment for dementia, that work has focused on dogs and cats, which can easily be brought to community-based care centers. This is the first study to examine equine therapy for the same population.

And while horses could possibly be brought to community centers for outdoor therapy, a situation where clients could periodically visit an equine therapy center might be the best option, Dabelko-Schoeny said. That way they get the full experience of being on the farm.

Gwendolen Lorch, assistant professor of veterinary clinical medicine at Ohio State and co-author of the study, agreed that the country setting may have made the therapy more effective.

"I think another positive influence for these clients was the environment. They found the quietness and smells of the country very relaxing and restful. This was in contrast to their normal day care environment and their intercity dwelling," Lorch said. "It is difficult to tell what factors made this successful, but we do know that it was most likely a combination of events."

This study was funded by a private donor who wanted Ohio State to study the effectiveness of equine therapy for dementia. Now that the study is over, some of the clients' families have elected to continue to visit the farm.