The Journal of Applied Physiology has published an article by Jordan Santos-Concejero of the Faculty of Physical Activity and Sport Sciences of the University of the Basque Country (UPV-EHU), and entitled `Maintained cerebral oxygenation during maximal self-paced exercise in elite Kenyan runners'. This is a pioneering study in the world of the physiology of exercise, given that it describes for the first time that elite Kenyan athletes have greater brain oxygenation during periods of maximum physical effort, and which contributes to their success in long-distance races.

Doctor Jordan Santos-Concejero, of the Department of Physical Education and Sport at the UPV/EHU, carried out research the aim of which was to analyse the response of cerebral oxygenation at maximum and progressive rhythms amongst elite Kenyan runners from the Kalenjin tribe. These results were presented to the scientific community at the European Congress of Sport Science in Amsterdam in July past, and entered for the Young Investigator Award, and which have been now published by the Journal of Applied Physiology. The research shows that the Kenyan runners are able to maintain their cerebral oxygenation within a stable range, which may contribute to their success in long-distance races.

The trials were undertaken at the laboratories of the Research Unit for Exercise Science and Sports Medicine in Cape Town University and the University of Stellenbosch (both in South Africa). A sample of 15 elite Kenyan runners was selected, all from the Kalenjin tribe, and each with achievements in the Half Marathon of between 1.01 and 1.03. The cerebral oxygenation was studied during the exercise (basically changes in oxyhaemoglobin, deoxyhaemoglobin, blood flow, arterial saturation, and so on) using NiRS (Near-infrared Spectroscopy) and oximetry readings during a maximum trial of 5 kilometres and a maximum incremental test. 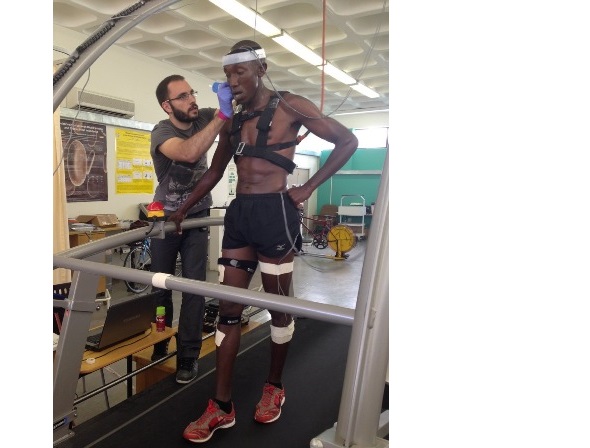 Credit: University of the Basque Country

"Contrary to all that published in the literature," explained doctor Santos-Concejero, "we can see that the Kenyans were capable of maintaining their oxygenation in a stable manner during the 5 kilometre trial, with implications for the athletes' performance."

It has been observed that, when cerebral oxygenation in the prefrontal lobule falls, the neural activity in this zone also drops. This zone is closely linked to the control of movement and to decision-making, and it has thus been put forward that this reduction in neuronal activity may explain the drop in performance observed amongst European athletes, on cerebral oxygenation reducing. Given that, with the Kenyan athletes, this reduction does not occur, "we believe that the neuronal activation in the prefrontal lobule is not compromised and perhaps this capacity of maintaining their cerebral oxygenation in a stable way may contribute to their great performance in long-distance trials," explained the UPV/EHU teacher.

The research also focused on the possible causes of this particularity of African athletes, attributing their stable cerebral oxygenation during maximum effort to early lifestyle factors such as the prenatal exposure to high altitudes and the high levels of physical activity during childhood. "The prenatal exposure to high altitudes has protector effects on the fetus, greater blood flow to the uterine artery, which may involve greater cardiopulmonary capacity in adulthood and, consequently, less incidence of arterial desaturation during high-intensity exercises," concluded the research.

Also, the undertaking of physical exercise regularly during childhood implies benefits such as increase in ventricular mass and motor coordination, lower levels of cytokines and, most importantly, greater neural growth as a consequence of the greater vascularization of the encephalus. "This last point may partially explain why their cerebral oxygenation is maintained during periods of maximum effort," stated Jordan Santos-Concejero.

Related Topics
The Immune System
Advertisement
Chosen for You
eBook