Researchers at ETH Zurich’s Department of Biosystems Science and Engineering in Basel have developed a new microscopy technique that enables for the first time to selectively visualize individual cells within the complex, three-dimensional tissue of a living organism. The researchers have thus succeeded in capturing spectacular microscopic images, such as in the nervous system of a zebrafish larva, a preferred model organism for research. Motor neurons in the spinal cord can be seen in the researchers’ images; at the same time, a single neuron with all its extensions is highlighted in another color.

An observation by William Dempsey, post-doc in the group of ETH professor Periklis Pantazis, led to the new application. He worked with a special class of fluorescent proteins that change color when irradiated with laser light of a specific wavelength. One such ‘chameleon protein’ is called Dendra 2, which normally emits green light when illuminated with blue light. The emission of Dendra 2 is however shifted into the red when it is irradiated by intensive violet or ultraviolet (UV) laser light.

Dempsey and Pantazis specifically discovered that when Dendra 2 is irradiated by both a blue and a red laser at the same time, the protein’s color can also change to red. For this dual-color illumination low intensity laser light is sufficient. In contrast to high intensity violet or UV irradiation it does not damage living cells.

ETH professor Pantazis and his colleagues then had an idea of how this finding could be deployed in light microscopy. Fluorescent proteins can be used to make whole cells, precise cell structures or single molecules visible. For the first time, the ETH researcher’s discovery permits a single cell or group of molecules located within a desirable part of a living organism to be highlighted with one color, while all the other cells or molecules remain visible with another color.

Focus on one point

The research group showed that when used individually, two different laser beams cannot change a chameleon protein’s color. But when the two beams are combined and directed in a way that they meet at a certain point on the object, then the proteins in focus change color. In contrast, the proteins that are not activated at the same time by the two lasers retain their original color. 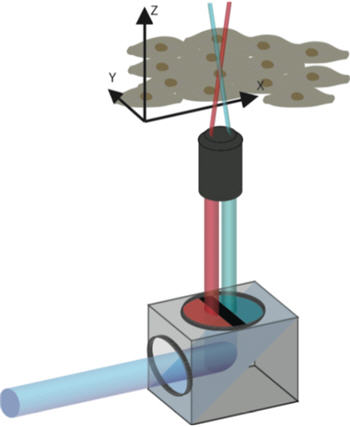 The researchers have developed a simple and inexpensive color filter, which can be used with the conventional confocal laser microscopes that are found in many biomedical research institutes. When mounted between the laser source and object, the filter divides the laser light into separate blue and red beams that are directed on to a small focal point on the object.

In the case of the zebrafish larva, which is transparent and therefore well suited for microscopy, the ETH researchers used Dendra 2 to color neurons. They then focused the combined laser beam’s focal point on the cell body of a single neuron in a live, anesthetized zebrafish. The local Dendra 2 molecules became red, spread throughout the entire cell and dyed the cell extensions. All other cells, even in the immediate vicinity of the targeted cell, remained green.

The ability to make individual neurons visible could be of great importance, for example, in the precise mapping of the brain, according to Pantazis. Since the method is suitable for individual cell targeting in living organisms, it could also be used to examine dynamic processes; for example, what happens to individual cells or a group of molecules when researchers treat an organism with active pharmaceutical ingredients. Embryo development could also be examined in more detail. “Our method allows for a three-dimensional analysis in an elegant manner,” explains Pantazis. “This is a very nice example of how you can take a result from basic research and use it to provide a solution for a technically challenging issue.” Pantazis hopes the technique will be used more broadly in biomedical research in the future and is in talks with microscope manufacturers to implement this technology.