Scientists have bioengineered, in neurons cultured from rats, an enhancement to a cutting edge technology that provides instant control over brain circuit activity with a flash of light. The research funded by the National Institutes of Health adds the same level of control over turning neurons off that, until now, had been limited to turning them on.

“What had been working through a weak pump can now work through a highly efficient channel with orders of magnitude greater sensitivity for impact on cell function,” explained Karl Deisseroth, M.D., Ph.D.,  of Stanford University, Stanford, Calif.

It is like going from a squirt to a gushing hose.

Deisseroth and colleagues report on what is being hailed as a marvel of genetic engineering in the April 25, 2014 issue of the journal Science.

“This latest discovery by the Deisseroth team is the type of neurotechnology envisioned by President Obama when he launched the BRAIN Initiative a year ago,” said Thomas R. Insel, M.D., director of the National Institute of Mental Health, a funder of the study. “It creates a powerful tool that allows neuroscientists to apply a brake in any specific circuit with millisecond precision, beyond the power of any existing technology. This will be vital for understanding brain circuits involved in behavior, thinking, and emotion.”

Deisseroth’s team had pioneered the use of light pulses to control brain circuitry in animals genetically engineered to be light-responsive – optogenetics. Genes that allow the sun to control light-sensitive primitive organisms like algae, melded with genes that make fluorescent marker proteins, are fused with a deactivated virus that delivers them to specific types of neurons which they become part of – allowing pulses of light to similarly commandeer brain cells.

When a neuron fires depends on the balance of ions flowing across the cell membrane, so being able to experimentally control this cellular machinery is critical for understanding how the brain works. But until now, the optogenetic tools for turning off neurons have been much less powerful than for turning them on – a weak inhibitory pump, moving only one ion per photon of light, versus an efficient excitatory channel. 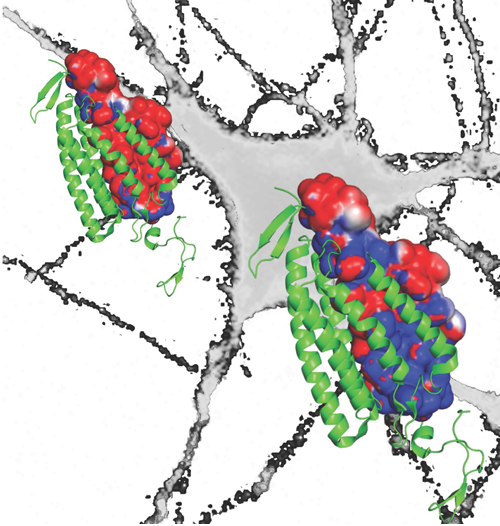 Stanford bioengineers and their colleagues recently discovered the crystal structure  of channelrhodopsin, the protein borrowed from algae to achieve optogenetic control of neurons. To transform this excitatory channel into an effective inhibitory channel, the team systematically introduced mutations into the channel’s gene, gradually reshaping its structure through molecular engineering into one with optimal inhibitory properties. To become an effective inhibitory channel, its central pore needed to be lined with positive instead of negatively charged amino acids to be converted from a cation (positive ion)-conducting into an anion (negative ion) -conducting channel.

It turns out that there are economies of scale afforded by the transformed channel – the more the inhibition, the less light required to achieve the desired biological effect. This raises possible future therapeutic applications, such as in the management of pain, said Deisseroth.