The degradation and regeneration of myelin sheaths characterise neurological disorders such as multiple sclerosis. Cholesterol is an indispensable component of myelin sheaths. The cholesterol for the regenerated myelin sheaths must therefore either be recycled from damaged myelin or produced again locally. In a recent study, scientists at the Max Planck Institute for Experimental Medicine in Göttingen, led by Gesine Saher, found that in the case of chronic damage, unlike in acute damage, hardly any cholesterol is recycled. Instead, the new production of cholesterol determines the efficiency of the repair. Unexpectedly, not only the myelin-forming cells themselves but also nerve cells make an important contribution to regeneration. Cholesterol synthesis in nerve cells ensures the replenishment of newly myelin-forming cells. This could impact the therapeutic success for myelin disorders such as multiple sclerosis.

When lesions develop in myelin disorders such as multiple sclerosis, the cholesterol- and lipid-rich insulating layer around the nerve fibres is lost. In order to prevent permanent damage, the now unmyelinated nerve fibres must be protected again as quickly as possible by newly regenerated myelin. In the acute phase of the disorder, defective myelin is abundant. Cholesterol is taken up from defective myelin by phagocytes and reprocessed and made available to the myelin-forming cells. This repair process often proceeds quickly and smoothly in younger patients.

However, the longer the disorder lasts, the less efficient this critical process becomes. Phagocytes of the brain can turn into foam cells that are no longer involved in the recycling of cholesterol. The chronic and repeated degradation of myelin sheaths eventually leaves nerve fibres permanently unmyelinated. Degenerated myelin and cholesterol are thus scarce in chronic lesions. “We suspected that in the low-cholesterol environment of chronic lesions, the production of this important lipid kicks in”, explains lead researcher Gesine Saher from the Max Planck Institute for Experimental Medicine in Göttingen.

Cholesterol from nerve cells promotes the regeneration of myelin-forming cells

Saher and her working group are investigating the role of cholesterol and other lipids in the nervous system under both physiological and pathological conditions. Together with an international team of researchers, they have now investigated which of the body’s own processes contribute to repair after chronic myelin disease.

In their study, the researchers examined nerve cells (neurons) from pharmacological and genetic mouse models with myelin defects. Neurons normally cover the majority of their cholesterol demand by uptake of lipid-rich lipoproteins with only little synthesis. In acute lesions, cholesterol production in nerve cells is even further reduced. “The fact that the neurons from the chronic disorder models boost the production of cholesterol was completely surprising”, reports Stefan Berghoff, former coworker of Gesine Saher and first author of the study. 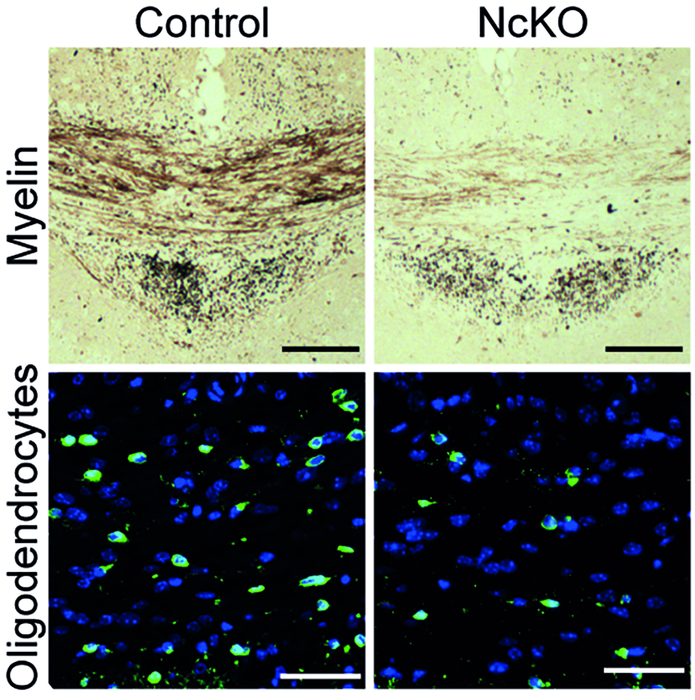 In order to investigate the relevance of this observation, the researchers genetically inactivated the synthesis of cholesterol in neurons and in the myelin-forming cells (oligodendrocytes) of mice. In the neuronal and oligodendroglial mutants, the regeneration of myelin sheaths was severely reduced in chronic lesions. However, unlike in glial mutants, neuronal cholesterol also enhanced the proliferation of oligodendrocyte progenitor cells. Treatment with a cholesterol-enriched diet had a similarly positive effect on these progenitor cells. “We assume that neurons provide this extra production of cholesterol”, says Berghoff. “This benefits all other cells in chronic lesions, which have greatly reduced their own production of cholesterol”.

Although acute and chronic lesions and their endogenous repair mechanisms differ greatly, the availability and management of cholesterol and other lipids ultimately makes a considerable contribution to the efficiency of regeneration. “The challenge of the next studies will be to develop therapy concepts for patients with myelin disorders in which acute and chronic lesions can be treated simultaneously”, says Saher, leader of the research team.