With a bit of light, a few photo sensitive compounds and specialized paper, the blueprint was born. As the favored type of technical drawing for over a century, architects used this crucial tool for its fast reproducibility as well as its capacity for detailed documentation. For workers on a build site, the document was equally essential as it contained all the necessary design information, the specific types of components included, and served as a guide detailing how everything fit together. If there was ever any doubt, more often than not a quick consult with the blueprint resolved questions and progressed stalled construction forward.

But what happens when neuroscientists have questions about the brain and the intricate connections within? Is there even such a thing as a brain blueprint? Despite an ever-growing body of work uncovering how neurons in the brain form connections, researchers still lack a comprehensive diagram detailing their wiring. Establishing this would have the potential to dramatically improve our understanding of the brain, uncovering how the unique circuitry of individual structures endow us with extraordinary abilities like language, sensory perception and cognition. 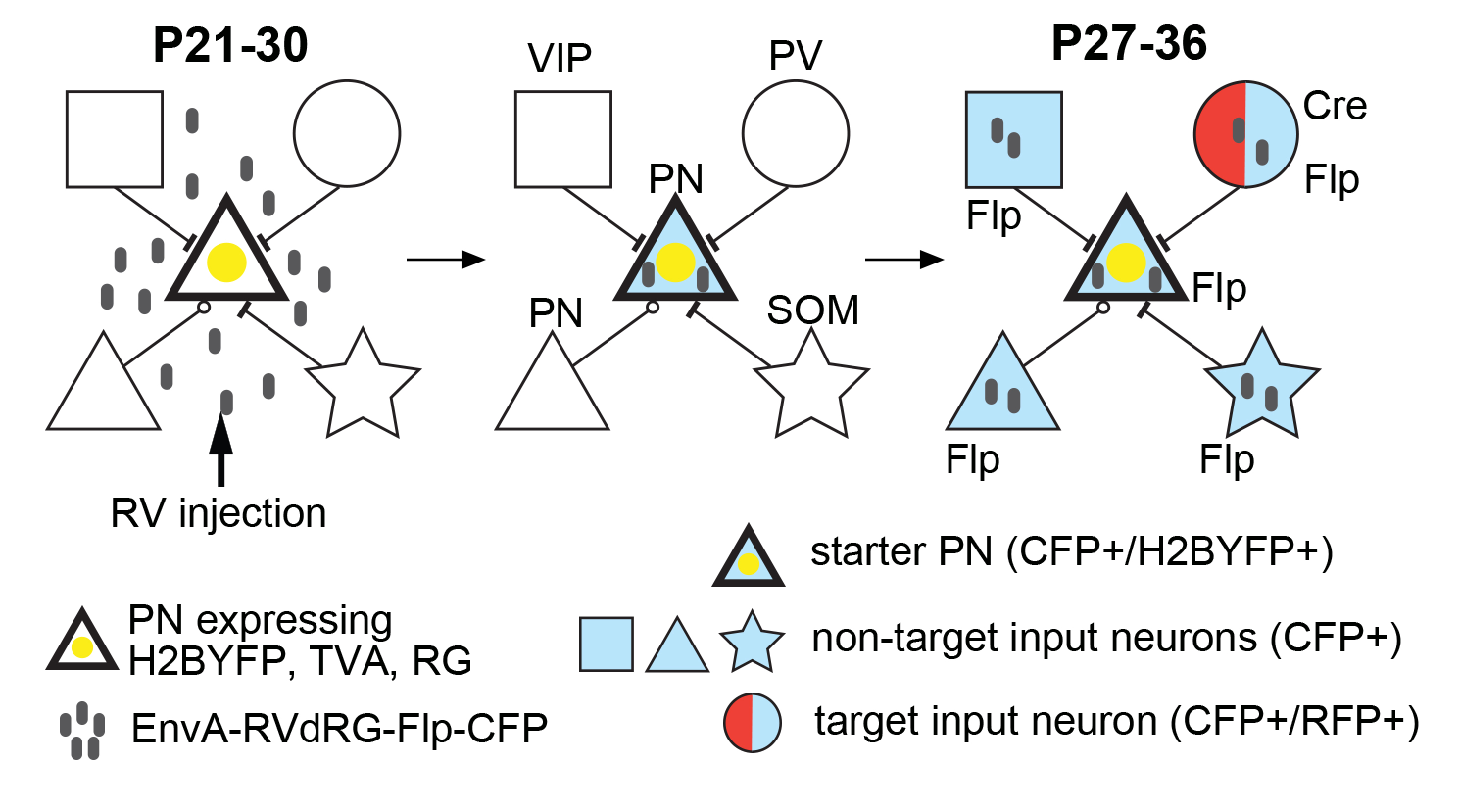 Schematic of intersectional monosynaptic tracing (iMT) principle. iMT is a novel genetic strategy combining the principle of rabies virus-mediated monosynaptic tracing with a Cre/Flp recombinase dependent intersectional labeling method.Taking the first step towards actualizing a blueprint of the brain, researchers from the Max Planck Florida Institute for Neuroscience (MPFI), have developed a novel technique capable of tracing intricate neural connections with unprecedented sensitivity. In a recent publication in Nature Neuroscience, researchers in the lab of Dr. Hiroki Taniguchi, have demonstrated both the unparalleled specificity and high throughput nature of the approach. By innovatively combining cutting-edge genetic tools with the established technique of monosynaptic tracing, the Taniguchi Lab has created a powerful new tool named intersectional monosynaptic tracing (iMT), capable of unraveling the elaborate circuits within the brain. Credit: MPFI

Studying a specialized class of brain cell known as inhibitory interneurons, the Taniguchi Lab is interested in looking into how these diverse cells assemble into circuits in various regions of the cerebral cortex. Normally, these cells act to refine, shape and balance information processing, but their dysfunction has been implicated in diseases such as autism, schizophrenia and epilepsy. Elucidating how these inhibitory circuits function, will pioneer novel approaches for the diagnosis and treatment of brain disorders. One challenging aspect hindering the elucidation of cortical circuits, is the sheer diversity of neurons in the brain.

Dr. Taniguchi explains, "While cellular diversity makes the brain so unique, it also conveys a great difficulty in the study of individual circuits. Take for instance the typical inhibitory circuit that we study in the lab; one excitatory principal neuron that transmits information over long distances from one brain region to another, and multiple inhibitory neurons that form connections with it. At first glance this model seems fairly simple but in reality, there are many diverse types of principal and inhibitory interneurons. Each individual type of interneuron is thought to make very specific connections depending on a principal neuron's location, function, and depth within the cortex. Without the ability to take a look at the specific connections formed by each subpopulation of inhibitory neuron, an accurate picture of the circuit cannot be formed.

Dr. Michael Yetman, a Postdoctoral Researcher in the Taniguchi Lab and first author of the paper notes that they wanted a technique that could cut through the cellular diversity of the brain, and only target specific subtypes of neurons. "This way, we could compare and contrast the connections of each unique subtype and study the types of circuits they form," explains Yetman.

iMT was developed with this goal in mind, overcoming limitations of previously used methods to trace connections within the brain. Techniques such as electrical stimulation and monosynaptic tracing, were either too inefficient or lacked the sensitivity necessary to precisely trace connections from many different cell types found in the brain. iMT builds upon its predecessor, but with an innovative twist that is critical for conveying the technique's sensitivity.

"Monosynaptic tracing utilizes a modified form of the rabies virus that lacks a necessary protein, restricting the virus to a single, starter cell and preventing infection of other cells around it," explains Yetman. "But if the protein along with the virus is expressed in only the starter cell, then the virus has the ability to jump and infect nearby cells. For studying neurons within the brain, we can express the virus and protein in a principal neuron and watch as the virus jumps the synaptic connections to only the interneurons directly connected. Once there, the virus in a sense gets stuck without the necessary protein and tells the neuron to start expressing fluorescent protein. With microscopy, we can see the cells that are directly connected to our starter neuron. The limitation is that we could only visualize the connected interneurons as a whole, missing the unique properties of individual subtypes."

To overcome this limitation, the team has added an additional genetic component that reliably and specifically targets single subtypes of interneurons. Once the virus reaches a cell subtype that contains this component, a second new fluorescent protein is expressed. Now scientists have the ability to visualize the interneuron connections as a whole as well as connections of specific interneuron subtypes. Already iMT has proved groundbreaking, revealing dramatic differences in the interneuron circuit design of key inhibitory subtypes as well those of the same subtype that form connections with principal neurons of different brain areas.

"Though iMT is only in the first stages of development, it has the potential to provide a more detailed, brain-wide circuit diagram that will be essential for combating prominent brain disorders," notes Yetman. "In the future we hope to further the technique to include the capability of studying the functional, and not just physical, connections of neural circuits."

iMT and the neuroscientists at MPFI, are taking us one step closer to achieving the construction of a concrete cortical blueprint.