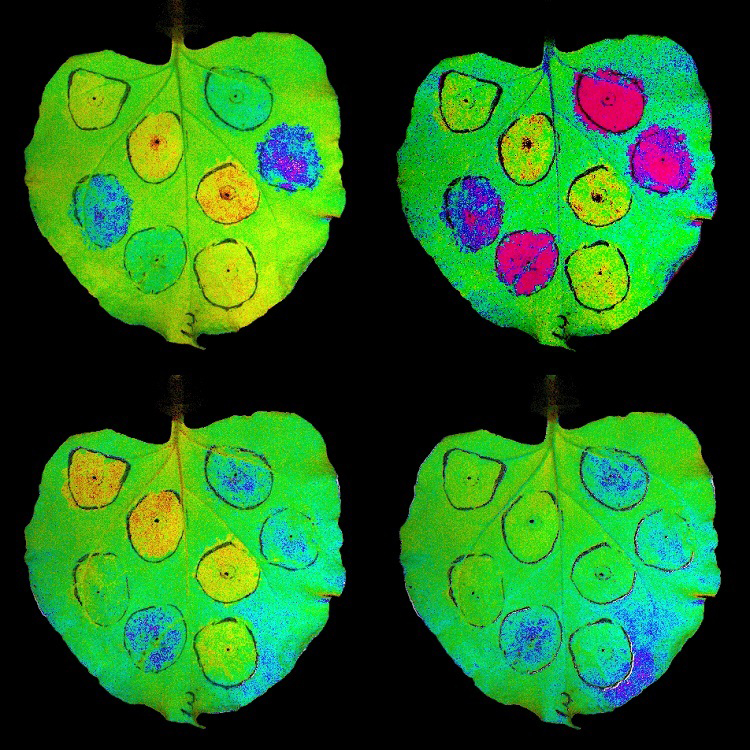 Plant biologists have bumped up crop productivity by increasing the expression of genes that result in more efficient use of light in photosynthesis, a finding that could be used to help address the world’s future food needs.

Scientists at the Department of Energy’s Lawrence Berkeley National Laboratory (Berkeley Lab), the University of California, Berkeley (UC Berkeley), and the University of Illinois targeted three genes involved in a process plants use to protect themselves from damage when they get more light than they can safely use. By increasing the expression of those genes, the scientists saw increases of 14-20 percent in the productivity of modified tobacco plants in field experiments.

The researchers described their findings in a paper published in the journal Science.

“Tobacco was used as the model crop plant in this study because it is easy to work with, but we’re working to make the same modifications in rice and other food crops,” said co-senior author Krishna Niyogi, a faculty scientist in Berkeley Lab’s Division of Molecular Biophysics and Integrative Bioimaging. “The molecular processes we’re modifying are fundamental to plants that carry out photosynthesis, so we hope to see a similar increase in yield in other crops.”

Niyogi, who is a Howard Hughes Medical Institute investigator and a UC Berkeley professor of plant and microbial biology, teamed up with Stephen Long, a plant biology and crop sciences professor at the University of Illinois, for the study.

In photosynthesis, plants use the energy in sunlight to take up carbon dioxide from the atmosphere and convert it into biomass, which we use for food, fuel, and fiber. When there is too much sunlight, the photosynthetic machinery in chloroplasts can be damaged, so plants need photoprotection. Inside chloroplasts, plants have a system called NPQ, or nonphotochemical quenching, for this purpose.

Niyogi compared NPQ to a pressure relief valve in a steam engine.

“When there is too much sunlight, it’s like pressure building up,” said Niyogi. “NPQ turns on and gets rid of the excess energy safely. In the shade, the pressure in the engine decreases. NPQ turns off, but not quickly enough. It’s like having a leak in the system with the valve left open. The photosynthetic engine can’t work as efficiently.”

The highly variable levels of light plants receive, particularly in densely planted crop fields, presents a challenge to the efficient use of solar energy. Plants must adapt to intermittent shading from leaves that are higher in the canopy, or from passing clouds.

Niyogi and his postdoctoral research associates Lauriebeth Leonelli, Stéphane Gabilly, and Masakazu Iwai figured out a way to speed up recovery from photoprotection and demonstrated a proof of this concept in the laboratory. They used a new method to rapidly test gene expression in tobacco leaves. By boosting the expression of three genes involved in NPQ, they showed that NPQ turned off more quickly, and the efficiency of photosynthesis in the shade was higher.

Half of crop photosynthesis occurs in the shade, so any improvement in speeding up recovery from photoprotection could have a big benefit, the researchers said.

Illinois postdoctoral researchers Johannes Kromdijk and Katarzyna Glowacka took the trio of genes studied at Berkeley and put them into tobacco plants for further testing in greenhouse and field experiments.

The work to boost crop productivity comes as concerns about food shortages rise with the world’s population. The Food and Agriculture Organization of the United Nations estimates that food production will need to nearly double by 2050 to meet increasing demand. Yields of the world’s major staple crops have not been increasing fast enough to meet this projected need.

“My attitude is that it is very important to have these new technologies on the shelf now because it can take 20 years before such inventions can reach farmer’s fields,” said Long. “If we don’t do it now, we won’t have this solution when we need it.”

Story from Lawrence Berkeley National Laboratory. Original piece written by Sarah Yang. Please note: The content above may have been edited to ensure it is in keeping with Technology Networks’ style and length guidelines.