Mapping the human brain's network of interconnections, known as the connectome is typically done with help from computational tools because recreating interconnections between different brain regions has been challenging in the lab. Researchers at the Okinawa Institute of Science and Technology Graduate University (OIST) have developed a method to recreate connections between neurons from two different brain areas in a dish. Their findings were published in Frontiers in Systems Neuroscience.

Researchers from OIST's Brain Mechanism for Behaviour Unit,Neurobiology Research Unit, and Physics and Biology Unit collaborated on this study. The study used neurons from embryos of mice. The first connections between different brain compartments develop at the embryonic stage.

The OIST researchers cultured neurons from the cortex, located at the front of the brain and a structure under it known as the striatum in separate compartments. The OIST researchers had previously shown that culturing cortical and striatal cells within the same compartment resulted in an artificial connectomic system as these cortical and striatal neurons grew connections in all directions in a disorganized manner.

Inside a living brain, neurons within the cortex and striatum form dense interconnections with neurons within their respective brain compartments. There is only one-way electrophysiological traffic, from cortical cells to striatal cells via the formers' axons. This one way street had been difficult to recreate in culture because striatal cells tend to die out when they do not receive electrophysiological impulses from cortical cells.

The OIST researchers paired cortical and striatal compartments on the surface of multiple multi-electrode arrays (MEAs) and kept the cultures alive for three weeks.

MEAs are tiny rectangular devices that consist of evenly spaced metal bumps arranged in a grid, all of which serve as electrodes. Each metal bump can transmit the measure of the electrical activity over it. Because many neurons talk to each other simultaneously, mathematical techniques are used to sort the signals from all active electrodes on a MEA, in order to determine which groups are sending and receiving feedback from other groups. 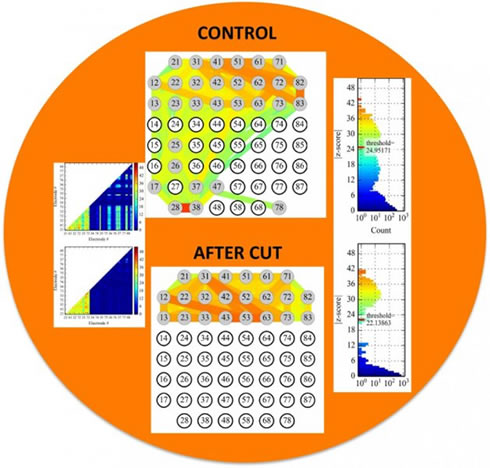 The top half of the MEA housed the compartment containing cells from the mouse cortex. The bottom half housed the compartment containing cells from the mouse striatum. When the axons reaching across the divide were cut with a knife, the interconnectivity between the cortical neurons inside their own compartment was relatively unaffected, whereas the striatal neurons showed no electrophysiological activity. This demonstrates that there is no back talk from the striatal side to the cortical side in this system and a working corticostriatal network similar to the one inside living brains has been recreated. The colors are a sign convention used to grade the strength of connectivity between two electrodes regardless of how far apart they are. Blue indicates the weakest connections while green, yellow, orange and red are used, in order, to show stronger and stronger gradations of connectivity. Credit: OIST

When this was done, electrical activity was snuffed out almost completely around the electrodes within the striatal compartment. The pattern of electrical activity between electrodes inside the cortical compartment was relatively unaffected, suggesting the interconnectivity between the cortical neurons was unchanged. This demonstrated that there were negligible upstream connections forming between striatal and cortical cells, and a working corticostriatal network had been recreated.

"We can also introduce a third compartment into this setup, possibly more. This would allow connections to grow between multiple types of neurons found in distant parts of the brain," said Dr. Marianela Garcia Munoz, Group Leader of the Brain Mechanism for Behaviour Unit.