Joint research between the University of the Basque Country (UPV/EHU) and the University of Nottingham has identified, for the first time, the structural damage caused at a molecular level to the brain by the chronic excessive abuse of alcohol. In concrete, the research team has determined the alterations produced in the neurons of the prefrontal zone of the brain (the most advanced zone in terms of evolution and that which controls executive functions such as planning, designing strategies, working memory, selective attention or control of behaviour. This research opens up pathways for generating new pharmaceutical drugs and therapies that enhance the life of alcoholic persons and reduce the morbimortality due to alcoholism.

The research was published in the digital journal specialised in biomedical sciences, PLoS One.

In the research, doctors Luis F. Callado, Benito Morentin and Amaia Erdozain, from the UPV/EHU, together with doctor Wayne G. Carter's team from the University of Nottingham, analysed the postmorten brains of 20 persons diagnosed with alcohol abuse/dependence, alongside another 20 non-alcoholic brains. Studying the prefrontal cortex, researchers detected alterations in the neuronal cytoskeleton in the brains of alcoholic patients; in concrete, in the α- and β-tubulin and the β II spectrin proteins. These changes in the neuronal structure, induced by ethanol ingestion, can affect the organisation, the capacity for making connections and the functioning of the neuronal network, and could largely explain alterations in cognitive behavior and in learning, attributed to persons suffering from alcoholism.

The description of damage and alterations, now detected for the first time at a molecular level in the prefrontal zone of the brain, is the first step for investigation in other fields. Highlighted amongst the new targets put forward is to elucidate the concrete mechanism by which alcohol produces these alterations -- to determine what the possible changes that the enzymes responsible for regulating the functioning of these proteins undergo, and to see if these processes also occur in other parts of the brain, for example, those controlling motor function. The final objective is to identify these molecular changes in order to be able to, on the one hand, link them with the processes of alcohol abuse and dependence and, on the other, generate new pharmaceutical drugs and therapeutic options that reverse the alterations produced by alcohol, enhancing the quality of life of alcoholic persons and reducing the mortality rate due to alcoholism.

The brain samples employed came from the collection of samples of the Neuropsychopharmacology Research Group at the Department of Pharmacology (UPV/EHU). These samples are a result of an agreement between the UPV/EHU and the Basque Institute of Legal Medicine. The diagnoses of the individuals were undertaken by the doctors responsible for the patients prior to their death, complying with the directives of the Diagnostic and Statistical Manual of Mental Disorders (DSM of the American Psychiatric Association).

In order to undertake the research, the researchers used techniques of optical microscopy, proteomics, Western blot and mass spectrometry. Optical microscopy demonstrated that the neurons in the prefrontal zone of the brains of the alcoholic patients had undergone alterations compared to those of non-alcoholic patients. In the following step, the research team used proteomic techniques, in order to identify which proteins were modified in these neurons. Thus, they determined that the altered elements belong to the families of proteins known as tubulins and spectrins. Tubulins make up the cytoskeleton of the neurons -- their architecture. The spectrins are responsible for maintaining the cell shape. In this way, both facilitate the relation between and the activity of the components of the brain's neuron network. 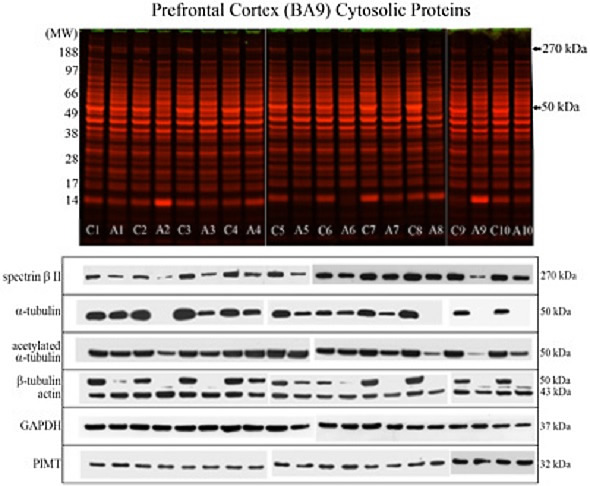 With the objective of quantifying the quantity of protein in each sample, they used the Western blot technique, checking that the levels of proteins were reduced as a consequence of the damage produced by the ethanol. The next stage was using mass spectrometry, which enabled confirming the exact identification of the proteins affected; i.e. within the tubulin family they observed the reduction in the α and β proteins; while amongst the spectrins, they located a decrease in the β II protein.