We are now a step closer to having a drug that can cure dementia and memory loss. Research team in Korea has discovered that reactive astrocytes, which have been commonly observed in Alzheimer's patients, aberrantly and abundantly produce the chief inhibitory neurotransmitter GABA and release it through the Best1 channel. The released GABA strongly inhibits neighboring neurons to cause impairment in synaptic transmission, plasticity and memory. This discovery will open a new chapter in the development of new drugs for treating such diseases.

The study led by Dr. C. Justin Lee at Korea Institute of Science and Technology (KIST) and Dr. Daesoo Kim(KAIST) is published of Nature Medicine on June 29 (Title: GABA from Reactive Astrocytes Impairs Memory in Mouse Models of Alzheimer Disease)

Alzheimer's disease, which is the most common cause of dementia, is fatal and currently, there is no cure. In Alzheimer's disease, brain cells are damaged and destroyed, leading to devastating memory loss. It is reported that 1 in 8 Americans aged 65 or over have Alzheimer's disease. In 2011, 7,600 elderly people with dementia lost their way back home and became homeless in Korea. However, to date, there has been no clear understanding of the mechanisms underlying dementia in Alzheimer's disease. So far, neuronal death is the only proposed mechanism available in scientific literature.

The research team discovered that reactive astrocytes in the brains of Alzheimer's disease model mice produce the inhibitory transmitter GABA by the enzyme Monoamine oxidase B(MAO-B) and release GABA through the Bestrophin-1 channel to suppress normal information flow during synaptic transmission. Based on this discovery, the team was able to reduce the production and release of GABA by inhibiting MAO-B or Bestrophin-1, and successfully ameliorate impairments in neuronal firing, synaptic transmission and memory in Alzheimer's disease model mice. 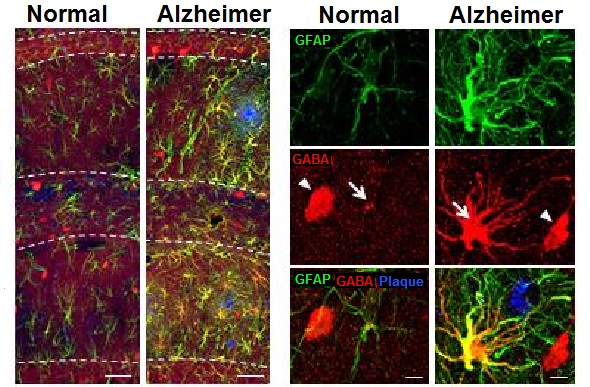 Confocal microscopy images of the hippocampus from normal and Alzheimer’s disease model mice. Astrocytes (green) become reactive (arrow) around amyloid plaques (blue) and have as much GABA (red) as GABAergic neurons (arrowhead). Credit: Korea Institute of Science and Technology

In the behavioral test, the team used the fact that mice tend to prefer dark places. If a mouse experiences an electric shock in a dark place, it will remember this event and avoid dark places from then on. However, a mouse with modeled Alzheimer's disease cannot remember if such shock is related to dark places and keeps going back to dark places. The team demonstrated that treating these mice with a MAO-B inhibitor fully recovered the mice's memory. The selegiline is currently used in Parkinson's disease as an adjunct therapy and considered as a one of best promising medicine for MAO-B inhibitor. But it has been previously shown to be less effective in Alzheimer's disease.

The team proved that selegiline is effective for a short time, but when it is used in long term, it loses its efficacy in Alzheimer's disease model mice. When treated for 1 week, selegiline brought the neuronal firing to a normal level. But when it was treated for 2 and 4 weeks, neuronal firing came back to the levels of untreated mice. From these results, the team proposed that there is a pressing need for a new drug that has long lasting effects.

Dr. C. Justin Lee said, "From this study, we reveal the novel mechanism of how Alzheimer's patients might lose their memory. We also propose new therapeutic targets, which include GABA production and release mechanisms in reactive astrocytes for treatment of Alzheimer's disease. Furthermore, we provide a stepping stone for the development of MAO-B inhibitors with long lasting efficacy."