The ritualized fighting behavior of one ant species is linked to increases in dopamine levels that trigger dramatic physical changes in the ants without affecting their DNA, according to research from North Carolina State University, Arizona State University and the U.S. Department of Agriculture.

The researchers studied Indian jumping ants (Harpegnathos saltator), which can undergo significant changes in physiology without any related changes to their DNA. Instead, the changes depend on which genes are turned on or off – which in turn is determined by social and environmental factors. This has made them a model organism for epigenetics researchers.

When an H. saltator colony’s queen dies, the female workers engage in ritual fights to establish dominance. While these battles can be fierce, they rarely result in physical injury to the workers. Ultimately, a group of approximately 12 workers will establish dominance and become a cadre of worker queens or “gamergates.”

The gamergates look like ordinary workers, but undergo extreme internal changes: their brains shrink by 25 percent; their ovaries expand to fill their abdomens; and their life expectancy jumps from about six months to several years or more. 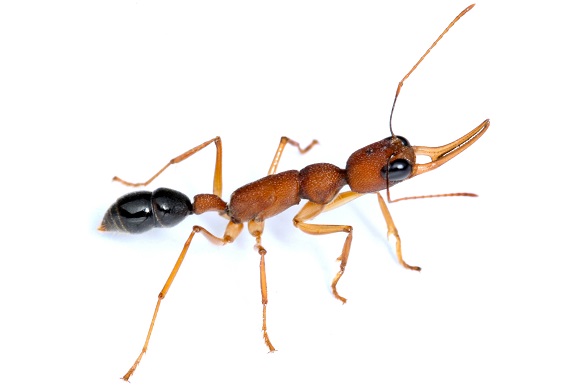 “We wanted to know what’s responsible for these physical changes,” says Dr. Clint Penick, lead author of a paper describing the work and a postdoctoral researcher at NC State. “The answer appears to be dopamine. We found that gamergates have dopamine levels two to three times higher than other workers.”

To understand what was happening, the researchers took a subset of workers from a colony (Colony A) and separated them from their gamergates. These workers effectively formed their own colony (Colony B) and began fighting to establish dominance.

When some of the workers in Colony B began to get the upper hand, Penick removed them from the colony. He found that these dominant ants had already begun to produce elevated levels of dopamine – more than other workers, but still less than full-fledged gamergates.

“This tells us that the very act of winning these ritual battles increases dopamine levels in H. saltator, which ultimately leads to the physical changes we see in gamergates,” Penick says. “Similarly, losing these fights pushes dopamine levels down.”

The findings may offer insight into the behavior of a range of social insect species, Penick says. “Policing behavior occurs in wasps and other ant species, and this study shows just how that behavior can regulate hormone levels to affect physiology and ensure that workers don’t reproduce,” he explains.