A cancer drug that has shown promise against Alzheimer's disease (AD) in mice and has begun early clinical trials has yielded perplexing results in a novel mouse model of AD that mimics the genetics and pathology of the human disease more closely than any other animal model.

The drug, bexarotene, was found to reduce levels of the neurotoxic protein amyloid-beta in experimental mice with late-stage Alzheimer's but to increase levels during early stages of disease.

The finding, by researchers at the University of Illinois at Chicago College of Medicine, was reported July 16 at the Alzheimer's Association International Conference in Copenhagen by Mary Jo LaDu, who in 2012 developed a transgenic mouse that is now regarded as the best animal model of the human disease. That experimental mouse carries a human gene that confers on people a 15-fold elevated risk of developing AD, making it the most important known genetic risk factor for the disease. 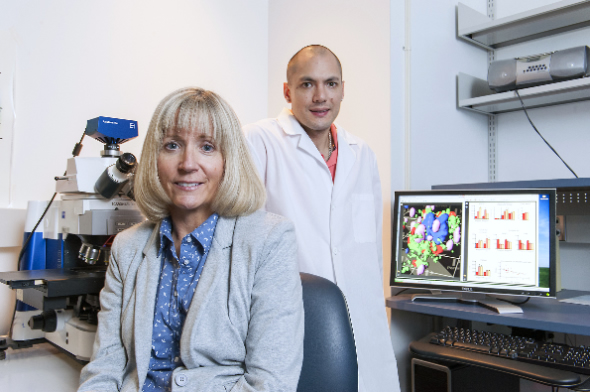 Alzheimer's disease is the most common form of dementia, affecting more than five million Americans. The disease is progressive and eventually fatal. One of the hallmarks of AD is the appearance of dense plaques in the brain composed of clumps of amyloid-beta. But recent research indicates that smaller, soluble forms of amyloid-beta -- rather than the solid plaques -- are responsible for the death of nerve cells that leads to cognitive decline.

Humans carry a gene for a protein in cells called apolipoprotein E, which helps clear amyloid-beta from the brain by binding to it and breaking it down. LaDu's mice carry the most unfortunate variant in humans, called APOE4, or APOE3, which is neutral for AD risk.

"APOE4 is the greatest genetic risk factor for Alzheimer's disease," said LaDu, who is professor of anatomy and cell biology at UIC. "Our previous work showed that compared to APOE3, the apolipoprotein produced by the APOE4 gene does not bind well to amyloid-beta and so does not clear the neurotoxin from the brain."

Results of previous studies in mice of bexarotene's effect on AD have been mixed, and none of those studies were done in mice that carry a human APOE gene and also develop progressive, AD-like pathology. The UIC research presented in Copenhagen is the first to do so.

LaDu, working with Leon Tai, research assistant professor in anatomy and cell biology, and their coworkersgave bexarotene to mice carrying APOE4 or APOE3 for seven days during the early, intermediate, or late stages of AD. The researchers then measured the levels of soluble amyloid-beta in the brains of the mice.

In mice carrying human APOE4 with later-stage AD, the researchers saw a 40 percent reduction in soluble amyloid-beta and an increase in the binding of apolipoprotein to amyloid-beta. But in APOE4 or APOE3 mice with earlier-stage AD, the amount of soluble amyloid-beta actually increased. When the researchers gave APOE4 mice bexarotene for one month starting when they had early-stage AD to see if the drug could prevent disease progression, there was no beneficial effect.

Tai thinks that for people who carry the APOE4 gene, short-term treatment with bexarotene in the later stages of disease may be beneficial. But further research is needed, he said, to determine length and timing of treatment -- and, importantly, whether the drug will benefit APOE3 carriers.

"Bexarotene also is extremely toxic to the liver," Tai said. "For prevention, where a drug is given before the symptoms of Alzheimer's disease appear, and likely over longer periods of time, bexarotene is not likely a viable therapeutic because of this known toxicity unless dosing is carefully controlled and patients are closely monitored."