Brain cells that multiply to help birds sing their best during breeding season are known to die back naturally later in the year. For the first time researchers have described the series of events that cues new neuron growth each spring, and it all appears to start with a signal from the expiring cells the previous fall that primes the brain to start producing stem cells.

If scientists can further tap into the process and understand how those signals work, it might lead to ways to exploit these signals and encourage replacement of cells in human brains that have lost neurons naturally because of aging, severe depression or Alzheimer's disease, said Tracy Larson, a University of Washington doctoral student in biology. She's lead author of a paper in the Sept. 24 Journal of Neuroscience on brain cell birth that follows natural brain cell death.

This is the first published study to examine the brain's ability to replace cells that have been lost naturally, Larson said.

The researchers worked with Gambel's white-crowned sparrows, a medium-sized species 7 inches (18 centimeters) long that breeds in Alaska, then winters in California and Mexico. Sometimes in flocks of more than 100 birds, they can be so plentiful in parts of California that they are considered pests. The ones in this work came from Eastern Washington. 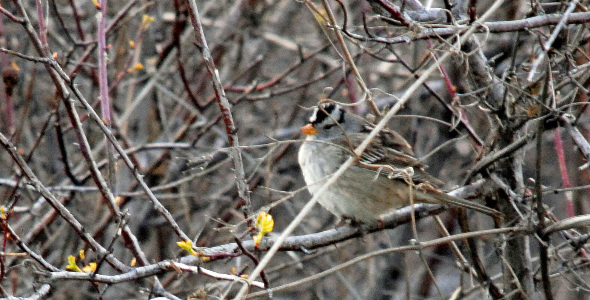 Gambel’s white-crowned sparrows are about 7 inches in length. Credit: T. Larson / U of Washington

Like most songbirds, Gambel's white-crowned sparrows experience growth in the area of the brain that controls song output during the breeding season when a superior song helps them attract mates and define their territories. At the end of the season, probably because having extra cells exacts a toll in terms of energy and steroids they require, the cells begin dying naturally and the bird's song degrades.

Gambel's white-crowned sparrows are particularly good to work with because their breeding cycle is closely tied to the amount of sunlight they receive. Give them 20 hours of light in the lab, along with the right increase of steroids, and they are ready to breed. Cut the light to eight to 12 hours and taper the steroids, the breeding behavior ends.

"As the hormone levels decrease, the cells in the part of the brain controlling song no longer have the signal to 'stay alive,'" Larson said. "Those cells undergo programmed cell death - or cell suicide as some call it. As those cells die it is likely they are releasing some kind of signal that somehow gets transmitted to the stem cells that reside in the brain. Whatever that signal is then triggers those cells to divide and replace the loss of the cell that sent the signal to begin with."

The next spring, all that's needed is for steroids to ramp up and new cells start to proliferate in the song center of the brain.

"This paper doesn't describe the exact nature of the signals that stimulate proliferation," Larson said. "We're just describing the phenomenon that there is this connection between cells dying and this stem cell proliferation. Finding the signal is the next step."

"Tracy really nailed this down by going in and blocking cell death at the end of the breeding season," said Eliot Brenowitz, UW professor of psychology and of biology, and co-author on the paper. "There are chemicals you can use to turn off the cell suicide pathway. When this was done, far fewer stem cells divided. You don't get that big uptick in new neurons being born. That's important because it shows there's something about the cells dying that turns on the replacement process.'

In mammals, the area of the brain that controls the sense of smell and the one that is thought to have a role in memories can produce tiny numbers of new brain cells but it is not understood how or why. The numbers of new cells is so low that trying to identify and quantify if dying cells are being replaced and if so, the steps that are involved, is much more difficult than when using a songbird like Gambel's white-crowned sparrow, Larson and Brenowitz said.

The natural die off of neurons in the song center of a sparrow’s brain as the breeding season concludes causes a measureable decline in the song that scientists can measure. Credit: T. Larson / U of Washington

The other co-authors on the paper are Nivretta Thatra, who started working with Larson while still in high school, continued while earning her UW undergraduate degree and is now at the Allen Institute for Brain Science; and Brian Lee, who worked in Brenowitz's UW lab while earning his undergraduate degree from Johns Hopkins University. The work was supported by the National Institutes of Health and the UW Department of Biology.