Complete the form below and we will email you a PDF version of "Eating habits, body fat related to differences in brain chemistry"

People who are obese may be more susceptible to environmental food cues than their lean counterparts due to differences in brain chemistry that make eating more habitual and less rewarding, according to a National Institutes of Health study published in Molecular Psychiatry.

Researchers at the NIH Clinical Center found that, when examining 43 men and women with varying amounts of body fat, obese participants tended to have greater dopamine activity in the habit-forming region of the brain than lean counterparts, and less activity in the region controlling reward. Those differences could potentially make the obese people more drawn to overeat in response to food triggers and simultaneously making food less rewarding to them. A chemical messenger in the brain, dopamine influences reward, motivation and habit formation.

"While we cannot say whether obesity is a cause or an effect of these patterns of dopamine activity, eating based on unconscious habits rather than conscious choices could make it harder to achieve and maintain a healthy weight, especially when appetizing food cues are practically everywhere," said Kevin D. Hall, Ph.D., lead author and a senior investigator at National Institute of Diabetes and Digestive and Kidney Diseases (NIDDK), part of NIH. "This means that triggers such as the smell of popcorn at a movie theater or a commercial for a favorite food may have a stronger pull for an obese person – and a stronger reaction from their brain chemistry – than for a lean person exposed to the same trigger."

Study participants followed the same eating, sleeping and activity schedule. Tendency to overeat in response to triggers in the environment was determined from a detailed questionnaire. Positron emission tomography (PET) scans evaluated the sites in the brain where dopamine was able to act. 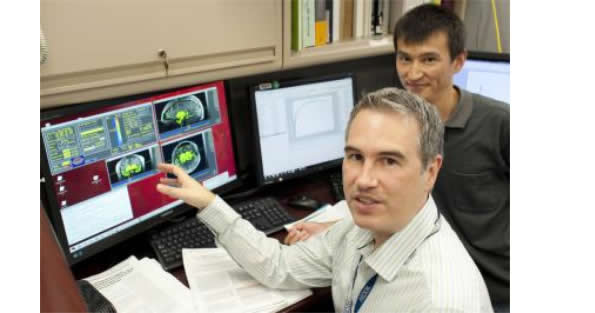 According to the Centers for Disease Control and Prevention, more than one-third of U.S. adults are obese. Obesity-related conditions include heart disease, type 2 diabetes and certain types of cancer, some of the leading causes of preventable death.

"These findings point to the complexity of obesity and contribute to our understanding of how people with varying amounts of body fat process information about food," said NIDDK Director Griffin P. Rodgers, M.D. "Accounting for differences in brain activity and related behaviors has the potential to inform the design of effective weight-loss programs."