In research available online and in an upcoming print issue of IEEE Transactions on Robotics, wearers of the robotic leg could walk on a moving treadmill almost as fast as an able-bodied person.

"We borrowed from robot control theory to create a simple, effective new way to analyze the human gait cycle," said Dr. Robert Gregg, a faculty member in the Erik Jonsson School of Engineering and Computer Science and lead author of the paper. "Our approach resulted in a method for controlling powered prostheses for amputees to help them move in a more stable, natural way than current prostheses." 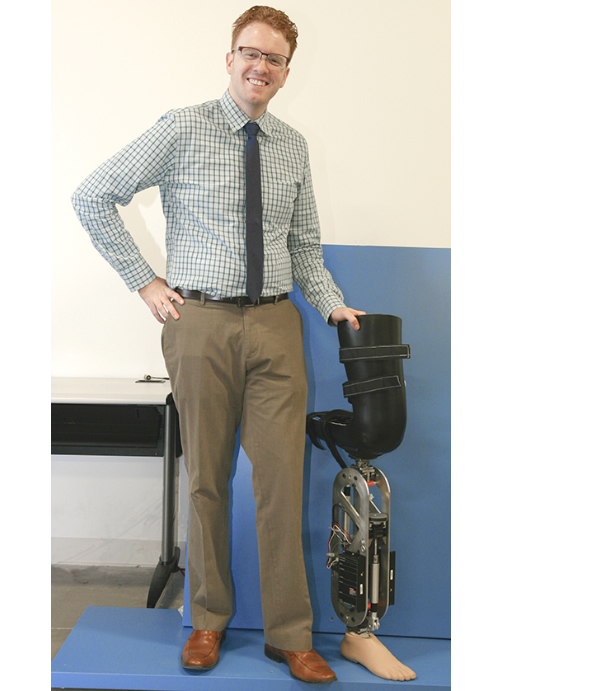 Dr. Robert Gregg stands next to a robotic leg that was designed by UTDesign students and is similar to the one reported in his research. Courtesy: University of Texas, Dallas

Humanoid robots can walk, run, jump and climb stairs autonomously, but modern prosthetics limit similar actions in humans. While prosthetics have been made lighter and more flexible, they fail to mimic the power generated from human muscles in able-bodied individuals. Powered prostheses, or robotic legs, have motors to generate force, but lack the intelligence to stably respond to disturbances or changing terrain.

Control engineers view the human gait cycle through the lens of time -- the interval at which each movement in the walking cycle needs to occur. Gregg, an assistant professor of bioengineering and mechanical engineering, proposed a new way to view and study the process of human walking: measuring a single variable that represents the motion of the body. In this study, that variable was the center of pressure on the foot, which moves from heel to toe through the gait cycle.

"The gait cycle is a complicated phenomenon with lots of joints and muscles working together," Gregg said. "We used advanced mathematical theorems to simplify the entire gait cycle down to one variable. If you measure that variable, you know exactly where you are in the gait cycle and exactly what you should be doing."

Gregg first tested his theory on computer models, and then with three above-knee amputee participants at the Rehabilitation Institute of Chicago, an affiliate of Northwestern University. He implemented his algorithms with sensors measuring the center of pressure on a powered prosthesis. Inputted with only the user's height, weight and dimension of the residual thigh into his algorithm, the prosthesis was configured for each subject in about 15 minutes. Subjects then walked on the ground and on a treadmill moving at increasing speeds.

"We did not tell the prosthesis that the treadmill speed was increasing. The prosthesis responded naturally just as the biological leg would do," Gregg said.

The participants were able to move at speeds of more than 1 meter per second; the typical walking speed of fully able-bodied people is about 1.3 meters per second, Gregg said. The participants also reported exerting less energy than with their traditional prostheses.

"Our approach unified multiple modes of operation into one and resulted in technology that could help people in the future," he said. "That and the feedback from participants were very rewarding."

Gregg said the next step in the research will be to compare results of experiments with robotic legs using both the time paradigm and center of pressure paradigm.

Researchers from the Rehabilitation Institute of Chicago, Northwestern University and the University of New Brunswick were also involved in the study.