Exploring How the Nervous System Develops

The circuitry of the central nervous system is immensely complex and, as a result, sometimes confounding. When scientists conduct research to unravel the inner workings at a cellular level, they are sometimes surprised by what they find.

Patrick Keeley, a postdoctoral scholar in Benjamin Reese's laboratory at UC Santa Barbara's Neuroscience Research Institute, had such an experience. He spent years analyzing different cell types in the retina, the light-sensitive layer of tissue lining the inner surface of the eye that mediates the first stages of visual processing. The results of his research are published June 19 in the journal Developmental Cell.

Using a rodent model, Keeley and his colleagues quantified the number of cells present in each retina for 12 different retinal cell types across 30 genetically distinct lines of mice. For every cell type the team investigated, the researchers found a remarkable degree of variation in cell number across the strains. More surprising, the variation in the number of different cell types was largely independent of one another across the strains. This has substantial implications for retinal wiring during cellular development. 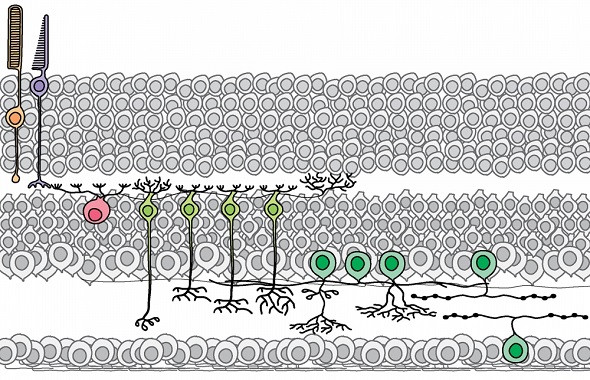 "These cells are connected to each other, and their convergence ratios are believed to underlie various aspects of visual processing," Keeley explained, "so it was expected that the numbers of these cell types might be correlated. But that was not the case at all. We found very few significant correlations and even the ones we did find were modest."

Using quantitative trait locus (QTL) analysis -- a statistical method that links two types of information, in this case cell number and genetic markers -- Keeley's team compared not only the covariance between different types of cells but also the genetic co-regulation of their number. When they mapped the variation in cell number to locations within the genome, the locations were rarely the same for different types of cells. The result was entirely unexpected.

"Current views of retinal development propose that molecular switches control the alternate fates a newborn neuron should adopt, leading one to expect negative correlations between certain cell types," said Reese, who is also a professor in UCSB's Department of Psychological and Brain Sciences. "Still others have proposed that synaptically connected nerve cells 'match' their pre- and post-synaptic numbers through a process of naturally occurring cell death, leading one to expect positive correlations between connected cell types. Neither expectation was borne out."

"If the cell types are not correlated, then some mice will have retinas with a lot of one cell type -- say, photoreceptors -- but not a lot of another cell type to connect to, in this case bipolar cells, or vice versa," Keeley added. "So how does the developing retina accommodate this variation?"

The authors posit that since the ratios of pre- to post-synaptic cell number are not precisely controlled, the rules for connecting them should offer a degree of plasticity as they wire their connections during development.

Take bipolar cells as an example. To test this assumption, the scientists looked at the morphology of their dendrites, the threadlike extensions of a neuron that gather synaptic input. Keeley and coworkers examined their size, their branching pattern and the number of contacts they formed as a function of the number of surrounding bipolar cells and the number of photoreceptors across these different strains.

"Photoreceptor number, on the other hand, had no effect upon the size of the dendritic field of the bipolar cells but determined the frequency of branching made by those very dendrites," he added. "This plasticity in neural circuit assembly ensures that the nervous system modulates its connectivity to accommodate the independent variation in cell number."

This research gives scientists an idea of how individual cell types are generated, how they differentiate and how they form appropriate connections with one another. Researchers in the Reese lab are trying to understand the genes that control these processes.

"I think that's important when we discuss cellular therapeutics such as transplanting stem cells to replace cells that are lost," Keeley said. "We're going to need this sort of fundamental knowledge about neural development to promote the differentiation and integration of transplanted stem cells. This focus on genetic and cellular mechanisms is going to be important for developing new therapies to treat developmental disorders affecting the eye."