Driving a car at 40 mph, you see a child dart into the street. You hit the brakes. Disaster averted.

But how did your eyes detect that movement? It’s a question that has confounded scientists.

Now, studying mice, researchers at Washington University School of Medicine in St. Louis have an answer: A neural circuit in the retina at the back of the eye carries signals that enable the eye to detect movement. The finding could help in efforts to build artificial retinas for people who have suffered vision loss.

The research is published in the online journal eLife.

The research team identified specific cell types that form a neural circuit to carry signals from the eye’s photoreceptors—the rods and cones that sense light—to the brain’s visual cortex, where those signals are translated into an image.

“This ability to detect motion is key for animals, allowing them to detect the presence of predators,” said principal investigator Daniel Kerschensteiner, MD, an assistant professor of ophthalmology and visual sciences. “And we know that these same cells are found not only in mice but in rabbits, cats, primates and likely humans, too. The cells look similar in every species, and we would assume they function in a similar manner as well.” 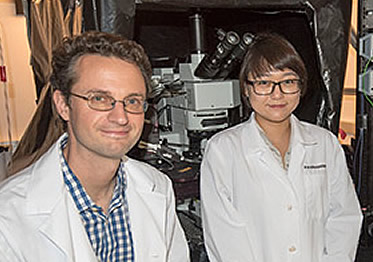 Studying the neural circuit, Tahnbee Kim, a graduate student in Kerschensteiner’s lab, identified a specific type of cell called an amacrine cell that’s key to detecting motion. Amacrine cells are thought to inhibit, or tamp down, the activity of other cells called ganglion cells. This process ensures that the brain doesn’t receive too much visual information, which could distort an image.

Using a technique that combines a powerful microscope with a method that allows researchers to track how often retinal cells fire, the researchers also showed that when there is motion in the visual field, a specific subtype of amacrine cell excites ganglion cells, signaling the brain so it becomes aware that an object is moving.

The discovery that this type of cell transmits object-motion signals is an important step in understanding how the eye senses motion. It also provides a high level of detail that will be needed to design computerized, artificial retinas, which will need to detect motion as well as sense light.

“There are many elements in the retinal circuitry that we haven’t figured out yet,” said Kerschensteiner, also an assistant professor of anatomy and neurobiology. “We know the signals from the rods and cones are transmitted to the retina — where the amacrine and ganglion cells are located — and that’s really where the ‘magic’ happens that allows us to see what we see. Unfortunately, we still have a very limited understanding of what most of the cells in the inner retina actually do.”