Differences in connectivity in the brain predict face blindness in adults, say Stanford neuroscientists. They plan to observe these surprising differences in children to discover how this visual deficit develops.

Recognizing the faces of family and friends seems vital to social interaction. However, some individuals lack this essential skill. Those with a condition called face blindness, or prosopagnosia, can see eyes, lips and other facial features, yet they cannot remember the whole picture, a face. The condition touches one in 50 people, including actor Brad Pitt, neurologist Oliver Sacks and primatologist Jane Goodall. Now Stanford neuroscientists have discovered that the structure of the wiring in the brain is key to predicting the condition.

"This relationship between brain structure and behavioral function will help to determine what is driving face blindness," said Kalanit Grill-Spector, an associate professor of psychology at Stanford University. "Does it develop through life experience or are children born with it?"

This is the first time scientists have shown that certain structural qualities of brain wiring, called white matter, next to the region of the brain that processes faces, may differ across individual brains, and that those differences predict face blindness.

"They did a fantastic job showing what is underlying the behavior," said Kirsten Dalrymple, a neuropsychologist at the University of Minnesota, who was not associated with the study. Dalrymple studies developmental face blindness in children.

"I started as a physics major because I loved watching Carl Sagan, but it was removed from human interaction, so I switched to neuroscience," said Jesse Gomez, a graduate student in Stanford's Neurosciences Program. "I like answering questions about how the human brain works." Gomez and his colleagues suspected a relationship between face blindness and white matter, which serves as the brain's communication grid. 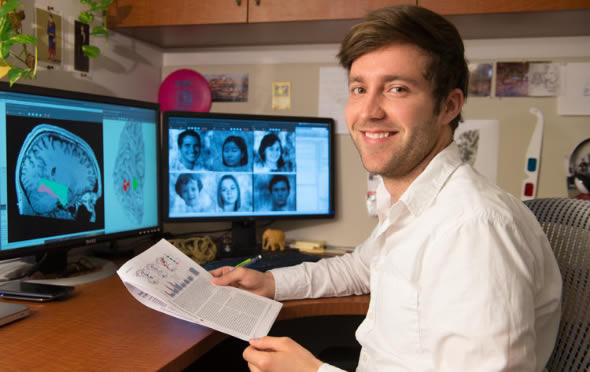 The brain's face- and place-recognition regions comprise grey-colored nerve cells. Extensions of those cells, the axons, range like wiring to other cells and regions of the brain to enable communication. Though face recognition is centered in particular regions of the brain, their complex function integrates perceptions such as depth, movement, shape and color, which take place in several parts of the brain that communicate with one another via their axons. Thicker axons and more axons speed communication.

An outer layer of myelin which sheaths each axon gives the axons a white appearance, hence the name, white matter. The more myelin there is, the faster the communication. Myelin abnormalities distort or interrupt nerve impulses, as is seen in multiple sclerosis, a condition characterized by scarring of the myelin sheath. And myelin health might play a role in the development of Alzheimer's disease.

Previously, scientists mapped networks of white matter that intersect like superhighways in several areas of the brain. But that quick and noninvasive view of the living brain did not provide a crisp view of white matter associated with a particular function.

"I came here to work with Kalanit because she and her colleagues had done research on face recognition. They had data on white matter, but no one had found a good way to analyze it," Gomez said. He mastered a new software model to show the many directions that that the naturally occurring water in the brain diffuses through white matter. Then he focused the model on white matter located closest to the regions of the brain responsible for face and place recognition.

With that clear view, Gomez found that patterns of diffusion next to specific brain regions, rather than diffusion of their entire wiring network, predicts recognition ability.

But his indirect measure of white matter properties could not tease out which components – width of axons, number of axons and/or amount of myelin – accounted for the telltale pattern. Gomez said he looks forward to using more direct measures of myelin recently developed in the lab of Stanford researcher Brian A. Wandell.

Gomez plans to test 5- to 11-year-old children annually to see whether and how white matter changes during development. He wants to find out whether a certain starting combination of white matter structure and face recognition will predict future face-recognition ability.

Gomez asks that those who suspect they or their children may be affected by face blindness contact him to participate in further studies. He said despite the prevalence of face blindness, it's hard to find affected kids. "They manage by recognizing a voice, way of walking or style of clothing. We find dyslexia because kids have to read, but kids are not taught to recognize a face. And these two visual deficits may be related," he said.

By studying the development of face blindness in children, Gomez would follow an enduring interest. "I worked in a preschool to help pay my way through Dartmouth," he said. "I got interested in how the human brain develops from a little babbling kid to people like Carl Sagan."