A compound found in trace amounts in alcoholic beverages is more effective at combating seizures in rats exposed to an organophosphate nerve agent than the current recommended treatment, according to new research published in eNeuro. 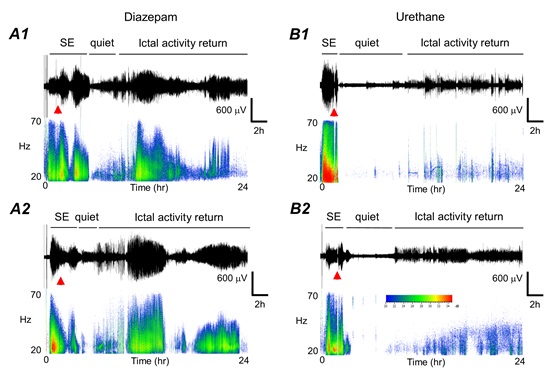 Left untreated, organophosphate poisoning can lead to severe breathing and heart complications. It is also known to cause seizures. Some patients are resistant to treatment with the anti-anxiety drug diazepam, the first line of defense for such poisoning, and its effectiveness decreases the longer the seizure lasts.

Asheebo Rojas and colleagues compared the ability of two treatments — diazepam and the anesthetic urethane (ethyl carbamate), commonly formed in trace amounts during fermentation of beer and wine from the reaction of urea and ethanol — to interrupt seizures in rats exposed to the organophosphate diisopropyl fluorophosphate. The researchers found urethane to be more effective than diazepam, suppressing seizures for multiple days and accelerating recovery of weight lost while protecting the rats from cell loss in the hippocampus. They did not observe any evidence of lung tumors in the urethane-treated animals seven months later, suggesting that the dose used in this study is not carcinogenic. The findings point to urethane or a derivative as a potential therapeutic for preventing organophosphate-triggered seizures from developing into epilepsy.

This article has been republished from materials provided by SfN. Note: material may have been edited for length and content. For further information, please contact the cited source.