What are the complex processes in the brain involved with choosing a mate, and are these processes different in females versus males? It's difficult to study such questions in people, but researchers are finding clues in fruit flies that might be relevant to humans and other animals. Three different studies on the topic are being published in the Cell Press journals Neuron and Current Biology.

Work over the past 100 years has largely focused on the overt courtship behaviors that male flies direct toward females. However, the female ultimately decides whether to reject the male or copulate with him. How does the female make this decision? In one Neuron paper, researchers report that they have identified two small groups of neurons in the female brain that function to modulate whether she will mate or not with a male based on his distinct pheromones and courtship song. In this paper, a team led by Dr. Bruce Baker of the Howard Hughes Medical Institute's Janelia Farm Research Campus in Virginia also reports that these neurons are genetically distinct from the previously identified neurons that function to drive the elaborate courtship ritual with which a male woos a female. "An understanding of the neural mechanisms underlying how sensory information elicits appropriate sexual behaviors can be used as a point of comparison for how similar sexual behavior circuits are structured and function in other species," says Dr. Baker.

In the Current Biology study, Dr. Leslie Vosshall of The Rockefeller University in New York City and her team found that a small group of neurons in the abdominal nerve cord and reproductive tract—called Abdominal-B neurons—is necessary for the female to pause her movement and interact with a courting male. When the neurons are inactivated, the female ignores the male and keeps moving, but when the neurons are activated, the female spontaneously pauses. "Sexual courtship is a duet—the male and female send signals back and forth until they reach the point that copulation proceeds," says Dr. Jennifer Bussell, the lead author of the study. "Pausing to interact with a male, rather than avoiding him, is a crucial step in any female's behavior leading to copulation. Tying a group of neurons to this particular response to males will allow us to dissect in detail how female mating circuitry functions." 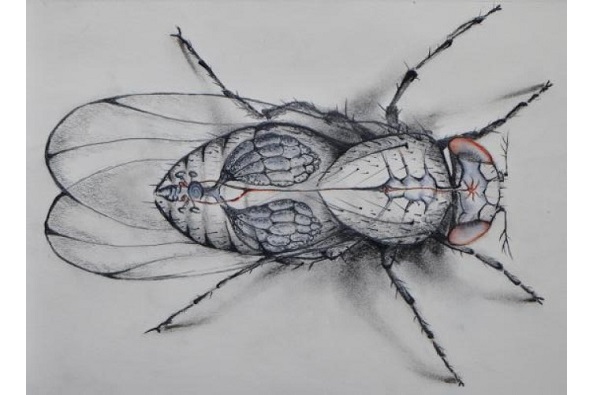 In another Neuron paper, researchers studied the effects of a small protein called sex peptide that is transferred along with sperm from males to females and is detected by sensory neurons in the uterus. Sex peptide changes the female's behavior so that she is reluctant to mate again for about10 days. The investigators traced the neuronal pathway that is modulated when the uterus's sensory neurons detect sex peptide. "Thanks to our work, we think the sex peptide signal goes to a region of the fly's brain that is the homolog of the hypothalamus, which has been know for many years to be central in controlling sexual receptivity in vertebrates," explains co-lead author Dr. Mark Palfreyman of the Research Institute of Molecular Pathology in Vienna, Austria. This region of the brain links the nervous system to the endocrine, or hormonal, system. "Of course, these models will still need to be tested and our work only provides an initial glimpse, but our study opens the possibility that analogous neuroendocrine systems control sexual receptivity from flies to vertebrates," adds senior author Dr. Barry Dickson, who was also a co-author on the Current Biology paper published by Dr. Vosshall.