The ability to hear soft speech in a noisy environment is difficult for many and nearly impossible for the 48 million in the United States  living with hearing loss. Researchers from the Massachusetts Eye and Ear, Harvard Medical School and Harvard University programmed a new type of game that trained both mice and humans to enhance their ability to discriminate soft sounds in noisy backgrounds. Their findings will be published in PNAS Online Early Edition the week of June 9-13, 2014.

In the experiment, adult humans and mice with normal hearing were trained on a rudimentary ‘audiogame’ inspired by sensory foraging behavior that required them to discriminate changes in the loudness of a tone presented in a moderate level of background noise.  Their findings suggest new therapeutic options for clinical populations that receive little benefit from conventional sensory rehabilitation strategies. 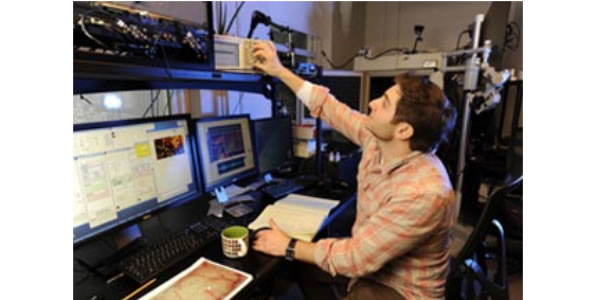 “Like the children’s game ‘hot and cold’, our game provided instantaneous auditory feedback that allowed our human and mouse subjects to hone in on the location of a hidden target,” said senior author Daniel Polley, Ph.D., director of the Mass. Eye and Ear’s Amelia Peabody Neural Plasticity Unit of the Eaton-Peabody Laboratories and assistant professor of otology and laryngology at Harvard Medical School. “Over the course of training, both species learned adaptive search strategies that allowed them to more efficiently convert noisy, dynamic audio cues into actionable information for finding the target. To our surprise, human subjects who mastered this simple game over the course of 30 minutes of daily training for one month exhibited a generalized improvement in their ability to understand speech in noisy background conditions.  Comparable improvements in the processing of speech in high levels of background noise were not observed for control subjects who heard the sounds of the game but did not actually play the game.”

The researchers recorded the electrical activity of neurons in auditory regions of the mouse cerebral cortex to gain some insight into how training might have boosted the ability of the brain to separate signal from noise.  They found that training substantially altered the way the brain encoded sound.

In trained mice, many neurons became highly sensitive to faint sounds that signaled the location of the target in the game.  Moreover, neurons displayed increased resistance to noise suppression; they retained an ability to encode faint sounds even under conditions of elevated background noise.

“Again, changes of this ilk were not observed in control mice that watched (and listened) to their counterparts play the game.  Active participation in the training was required; passive listening was not enough,” Dr. Polley said.

These findings illustrate the utility of brain training exercises that are inspired by careful neuroscience research. “When combined with conventional assistive devices such as hearing aids or cochlear implants, ‘audiogames’ of the type we describe here may be able to provide the hearing impaired with an improved ability to reconnect to the auditory world.  Of particular interest is the finding that brain training improved speech processing in noisy backgrounds – a listening environment where conventional hearing aids offer limited benefit,” concluded Dr. Jonathon Whitton, lead author on the paper. Dr. Whitton is a principal investigator at the Amelia Peabody Neural Plasticity Unit and affiliated with the Program in Speech Hearing Bioscience and Technology, Harvard–Massachusetts Institute of Technology Division of Health, Sciences, and Technology.