Gender may contribute to recovery time after concussion

A study of concussion patients using diffusion tensor imaging (DTI) found that males took longer to recover after concussion than females did. Results of the study, which show that DTI can be used as a bias-free way to predict concussion outcome, are published online in the journal Radiology.

Assessing outcomes and recovery time after concussion can be very subjective. Typically, physicians must rely on patient cooperation to assess injury severity.

"MRI and CT brain images of concussion patients are often normal," said Saeed Fakhran, M.D., assistant professor of neuroradiology at the University of Pittsburgh School of Medicine. "Diffusion tensor imaging is the first imaging technique that shows abnormalities associated with concussion, because it is able to see white matter tracts at a microscopic level."

DTI is an advanced form of MRI that allows researchers to assess microscopic changes in the brain's white matter. The brain's white matter is composed of millions of nerve fibers called axons that act like communication cables connecting various regions of the brain. DTI produces a measurement, called fractional anisotropy (FA), of the movement of water molecules along axons. In healthy white matter, the direction of water movement is fairly uniform and measures high in FA. When water movement is more random, FA values decrease. Abnormally low FA is associated with cognitive impairment in patients with brain injuries.

All patients underwent the same evaluation, including a computerized neurocognitive test and DTI of the brain. The DTI scans of the mTBI patients revealed abnormalities within the uncinate fasciculi (UF), a white matter tract that connects the frontal and temporal lobes of the brain. Although its exact role is controversial, the UF tract is believed to allow temporal lobe-based memory associations to modify behavior though interactions with another area of the brain.

"In the future, we would like to look at the issue of gender and concussions more in depth to determine who does better and why," Dr. Fakhran said.

A statistical analysis of the data revealed that UF FA value was a stronger predictor of recovery time than initial symptom severity based on neurocognitive testing. The most substantial risk factor for a recovery time longer than three months was decreased UF FA. Male gender also directly correlated with increased recovery time.

"The potential of DTI and UF FA to predict outcome after concussion has great clinical impact," Dr. Fakhran said. "Currently, we are heavily reliant on patient reporting, and patients may have ulterior motives, such as wanting to get back to play. But you can't trick an MR scanner."

The average time to symptom recovery for all concussion patients was 54 days. However, compared to the female patients who recovered in an average of 26.3 days, recovery was significantly longer for the male patients (an average of 66.9 days), irrespective of initial symptom severity. 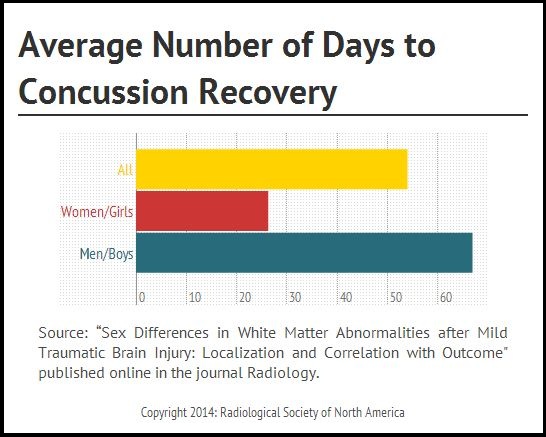 He said results of the study indicate a potential role for UF FA values in triaging concussion patients in the future.

"There's prognostic value in DTI for both children participating in sports as well as for professional athletes," he said. "Lower FA values in the uncinate fasciculi could offer a metric for evaluating the severity of mild traumatic brain injuries and predicting clinical outcome. We're not at the point where DTI can provide individual prognoses yet, but that's the hope and goal."