Ghost illusion created in the lab

Ghost illusion created in the lab

Ghosts exist only in the mind, and scientists know just where to find them, an Ecole Polytechnique Fédérale de Lausanne (EPFL) study suggests. Patients suffering from neurological or psychiatric conditions have often reported feeling a strange "presence". Now, EPFL researchers in Switzerland have succeeded in recreating this so-called ghost illusion in the laboratory.

On June 29, 1970, mountaineer Reinhold Messner had an unusual experience. Recounting his descent down the virgin summit of Nanga Parbat with his brother, freezing, exhausted, and oxygen-starved in the vast barren landscape, he recalls, "Suddenly there was a third climber with us... a little to my right, a few steps behind me, just outside my field of vision."

It was invisible, but there. Stories like this have been reported countless times by mountaineers, explorers, and survivors, as well as by people who have been widowed, but also by patients suffering from neurological or psychiatric disorders. They commonly describe a presence that is felt but unseen, akin to a guardian angel or a demon. Inexplicable, illusory, and persistent.

Olaf Blanke's research team at EPFL has now unveiled this ghost. The team was able to recreate the illusion of a similar presence in the laboratory and provide a simple explanation. They showed that the "feeling of a presence" actually results from an alteration of sensorimotor brain signals, which are involved in generating self-awareness by integrating information from our movements and our body's position in space.

In their experiment, Blanke's team interfered with the sensorimotor input of participants in such a way that their brains no longer identified such signals as belonging to their own body, but instead interpreted them as those of someone else. The work is published in Current Biology.

The researchers first analyzed the brains of 12 patients with neurological disorders - mostly epilepsy - who have experienced this kind of "apparition." MRI analysis of the patients's brains revealed interference with three cortical regions: the insular cortex, parietal-frontal cortex, and the temporo-parietal cortex. These three areas are involved in self-awareness, movement, and the sense of position in space (proprioception). Together, they contribute to multisensory signal processing, which is important for the perception of one's own body.

The scientists then carried out a "dissonance" experiment in which blindfolded participants performed movements with their hand in front of their body. Behind them, a robotic device reproduced their movements, touching them on the back in real time. The result was a kind of spatial discrepancy, but because of the synchronized movement of the robot, the participant's brain was able to adapt and correct for it.

Next, the neuroscientists introduced a temporal delay between the participant's movement and the robot's touch. Under these asynchronous conditions, distorting temporal and spatial perception, the researchers were able to recreate the ghost illusion. 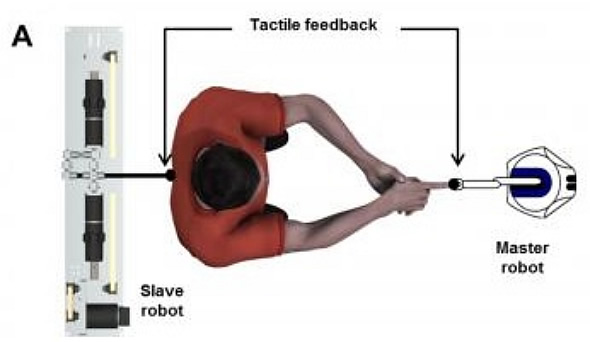 (A) A master-slave robotic system was used to allow participants to move their arms forward and receive tactile feedback on the back. The feedback was administrated synchronously or asynchronously (500 ms delay) with the movement, and with our without force feedback at the participants' fingertip. Credit: Current Biology 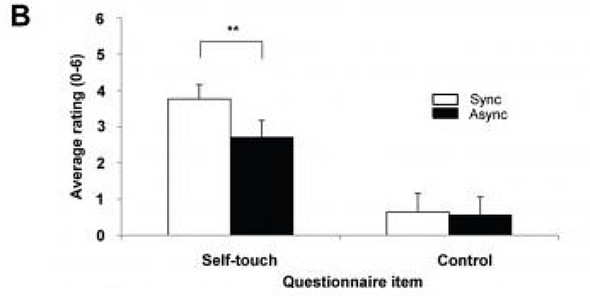 (B) Participants reported higher illusory self touch, and showed a larger drift in self-location towards the virtual back in the synchronous compared to the asynchronous condition; drift was also larger in the condition with (versus without) somatosensory force feedback to the participants' fingertip (C). Credit: Current Biology 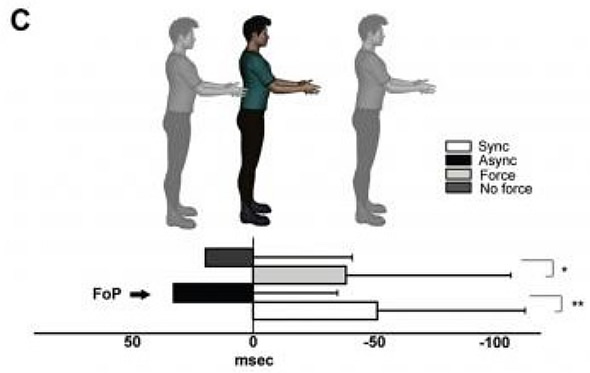 The condition in which five subjects spontaneously reported a FoP is indicated with an arrow.  Credit: Current Biology

The participants were unaware of the experiment's purpose. After about three minutes of the delayed touching, the researchers asked them what they felt. Instinctively, several subjects reported a strong "feeling of a presence," even counting up to four "ghosts" where none existed. "For some, the feeling was even so strong that they asked to stop the experiment," said Giulio Rognini, who led the study.

"Our experiment induced the sensation of a foreign presence in the laboratory for the first time. It shows that it can arise under normal conditions, simply through conflicting sensory-motor signals," explained Blanke. "The robotic system mimics the sensations of some patients with mental disorders or of healthy individuals under extreme circumstances. This confirms that it is caused by an altered perception of their own bodies in the brain."

A Deeper Understanding of Schizophrenia

In addition to explaining a phenomenon that is common to many cultures, the aim of this research is to better understand some of the symptoms of patients suffering from schizophrenia. Such patients often suffer from hallucinations or delusions associated with the presence of an alien entity whose voice they may hear or whose actions they may feel. Many scientists attribute these perceptions to a malfunction of brain circuits that integrate sensory information in relation to our body's movements.

"Our brain possesses several representations of our body in space," added Giulio Rognini. "Under normal conditions, it is able to assemble a unified self-perception of the self from these representations. But when the system malfunctions because of disease - or, in this case, a robot - this can sometimes create a second representation of one's own body, which is no longer perceived as 'me' but as someone else, a 'presence'."

It is unlikely that these findings will stop anyone from believing in ghosts. However, for scientists, it's still more evidence that they only exist in our minds.