The human brain is 80 percent water, which makes the constant regulation of the amount of fluid in the brain very important. Disruptions in the regulation of the direction or speed of the water flow are associated with medical conditions, including hydrocephalus ("water in the brain"), for example. Neurobiologists at Heidelberg University have now discovered a new mechanism that regulates the speed and direction of water flow between the cerebral spinal fluid and the brain cells. This mechanism could also be of great importance in the treatment of hydrocephalic diseases. The research results were published in the Journal of Biological Chemistry.

"Both too much and too little water in the brain can be life-threatening. Water transport is essential to sustain brain volume and function because it affects the concentration of signal molecules in the brain," explains Dr. Francesca Ciccolini, who leads a research group at the Interdisciplinary Center for Neurosciences. The water circulates among the blood vessels, the cerebral spinal fluid in the ventricular system, and the space inside and outside the brain cells. It follows the osmotic gradient, composed mainly of ions such as chloride ions. The speed of flow is largely influenced by the presence of water channels in the cell membrane called aquaporin channel proteins (AQPs), that are built into the cell membrane as needed. In general, phosphorylation, i.e. the addition of a phosphate group, of AQP channel proteins causes their removal from the cell membrane and hence reduced water in- and outflow. 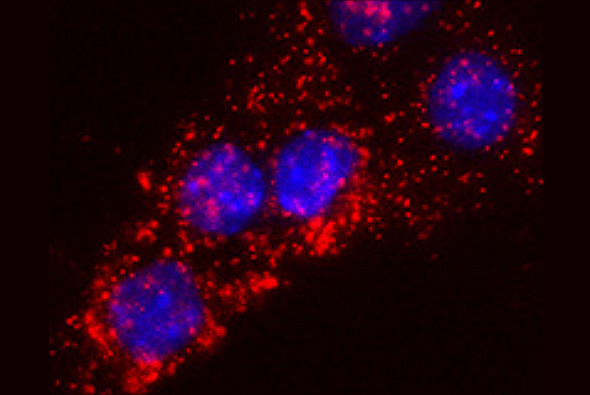 Isolated ependymal cells show the phosphorylation of AQP4 (in red) after the blocking of GABAA receptors. Cell nuclei are shown in blue. Credit: Heidelberg, Universität

Francesca Ciccolini's research group has now discovered the mechanism that controls the integration of a certain AQP channel protein in so-called ependymal brain cells, which act as a barrier between the brain and the ventricular system. This mechanism regulates the speed of water flow between the cerebral spinal fluid and the brain cells. The neurotransmitter gamma-aminobutyric acid (GABA) and the GABAA receptors play a critical role in this mechanism. "The GABAA receptors are extremely important in medicine in their biological function as inhibitory regulators of neuronal activity," explains Francesca Ciccolini. "Modulators of GABAA receptors are commonly used as medications in a broad spectrum of medical treatments, for example to induce sedation and muscle relaxation, to prevent seizures, to reduce anxiety and to counteract symptoms of alcohol withdrawal. Hence our results also point to the risk of therapies that involve the use of GABAA receptor modulators and thus have potential side effects on the basic regulation of water exchange within the brain."

The researchers additionally proved that the newly discovered mechanism is important for removing excess fluid from the cerebral spinal space and can therefore play a significant role in the treatment of hydrocephalic diseases. "Our findings offer up new possibilities for regulating the water content in the human brain," explains Ciccolini. In future studies, the researchers will explore whether this mechanism of AQP regulation is also relevant to other brain regions.