Complete the form below and we will email you a PDF version of "Heart drug may help treat ALS, mouse study shows "

Digoxin, a medication used in the treatment of heart failure, may be adaptable for the treatment of amyotrophic lateral sclerosis (ALS)  suggests new research at Washington University School of Medicine in St. Louis.

ALS, also known as Lou Gehrig's disease, destroys the nerve cells that control muscles. This leads to loss of mobility, difficulty breathing and swallowing and eventually death. Riluzole, the sole medication approved to treat the disease, has only marginal benefits in patients.

But in a new study conducted in cell cultures and in mice, scientists showed that when they reduced the activity of an enzyme or limited cells' ability to make copies of the enzyme, the disease's destruction of nerve cells stopped. The enzyme maintains the proper balance of sodium and potassium in cells.

"We blocked the enzyme with digoxin," said senior author Azad Bonni, MD, PhD. "This had a very strong effect, preventing the death of nerve cells that are normally killed in a cell culture model of ALS." 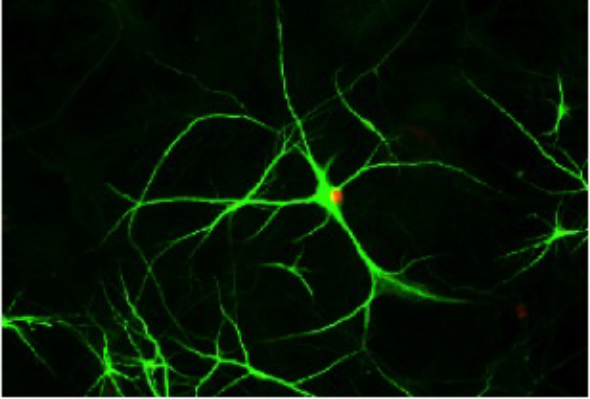 When scientists blocked an enzyme in the cells from a mouse model of ALS, more normal cells and their branches survived than in samples with unblocked enzyme. Credit: Gallardo, et al, Nature Neuroscience

The results stemmed from Bonni's studies of brain cells' stress responses in a mouse model of ALS. The mice have a mutated version of a gene that causes an inherited form of the disease and develop many of the same symptoms seen in humans with ALS, including paralysis and death.

Efforts to monitor the activity of a stress response protein in the mice unexpectedly led the scientists to another protein: sodium-potassium ATPase. This enzyme ejects charged sodium particles from cells and takes in charged potassium particles, allowing cells to maintain an electrical charge across their outer membranes.

Maintenance of this charge is essential for the normal function of cells. The particular sodium-potassium ATPase highlighted by Bonni's studies is found in nervous system cells called astrocytes. In the ALS mice, levels of the enzyme are higher than normal in astrocytes.

Recent studies have suggested that astrocytes may be crucial contributors to neurodegenerative disorders such as ALS, and Alzheimer's, Huntington's and Parkinson's diseases. For example, placing astrocytes from ALS mice in culture dishes with healthy motor neurons causes the neurons to degenerate and die.

"Even though the neurons are normal, there's something going on in the astrocytes that is harming the neurons," said Bonni, the Edison Professor of Neurobiology and head of the Department of Anatomy and Neurobiology.

How this happens isn't clear, but Bonni's results suggest the sodium-potassium ATPase plays a key role. When he conducted the same experiment but blocked the enzyme in ALS astrocytes using digoxin, the normal motor nerve cells survived. Digoxin blocks the ability of sodium-potassium ATPase to eject sodium and bring in potassium.

"The mice with only one copy of the sodium-potassium ATPase gene live longer and are more mobile," Bonni said. "They're not normal, but they can walk around and have more motor neurons in their spinal cords."

Many important questions remain about whether and how inhibitors of the sodium-potassium ATPase enzyme might be used to slow progressive paralysis in ALS, but Bonni said the findings offer an exciting starting point for further studies.