Published: January 25, 2018
| Original Story from The Sainsbury Wellcome Centre for Neural Circuitry and Behaviour
A platform in the Honeycomb Maze
Read time:

Complete the form below and we will email you a PDF version of "Honeycomb Maze: Novel test to study hippocampal-dependent spatial navigation"

A powerful new tool for the study of spatial memory was today described in Nature as a significant improvement over the current gold standard, the Morris Water Maze.

The novel Honeycomb Maze design allows for systematic analysis of the decisions an animal makes during navigation. Spatial navigation tasks are used to study the way animals identify their location and navigate towards favourable, and away from unfavourable, locations in response to changes in the environment.

Professor John O’Keefe of the Sainsbury Wellcome Centre at UCL, and 2014 Nobel laureate for the discovery of place cells, a class of neurons important for spatial sense, commented on the achievement:

“The resources of the Sainsbury Wellcome Centre and the UCL Biosciences mechanical workshop have enabled us to develop a new maze which has been in the planning and development stages for more than a decade during which we have tried out different technologies and tested different configurations.”

The Honeycomb Maze was intentionally designed to overcome the drawbacks of other tests for spatial navigation and memory such as the T- or Y-maze, Olton radial arm maze, Barnes maze and Morris Water Maze.

Professor O’Keefe describes the novel spatial navigation task:
“The Honeycomb Maze consists of 37 individually-movable platforms, which enables the confinement of an animal to a localised space anywhere in the maze and forces it to choose between two alternative paths to the goal. By choosing the path with the lesser deviation from the goal-heading direction, the animal shows that it knows where the goal is and the best route to get there.”

“The Honeycomb Maze replicates all the advantages of the justly-famous Morris Water Maze in that it forces the animal to approach a hidden goal from different directions, ruling out non-hippocampal-dependent strategies. In addition, by forcing the animal to choose between two alternatives, it provides a simple measure of success at each point in the maze.” Professor O’Keefe continued. 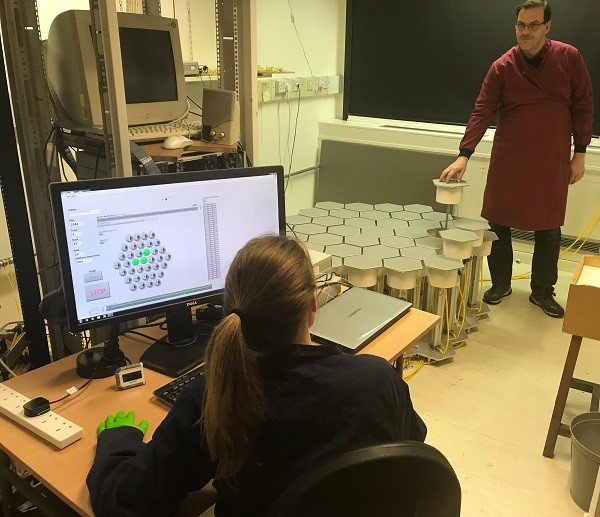 The paper compares results from both control animals and hippocampal-lesioned animals completing a navigational task on the Honeycomb Maze and the factors affecting their performance.

Firstly, the team demonstrate both the consistency and reproducibility of the novel test through three control groups of male Lister hooded rats. The control rats learn very quickly and the study shows three main variables that affect performance:
• The angle between the two choice platforms – performance improves for greater angles
• Distance from the goal – performance deteriorates with increased distance
• The angle between the correct platform and the goal – performance declines with an increase in the angle between the best choice platform and the goal
The researchers then describe a further experiment with hippocampal-lesioned animals and show the animals were both significantly deficient in learning the task and also took longer to make choices.
In addition, the Honeycomb Maze enables researchers to study the correlation of spatial navigation performance with the activity of place cells in the hippocampus where there is a map of an animal’s location in space.
Speaking about the importance of the Honeycomb Maze, Professor O’Keefe said “we see the maze as a general-purpose behavioural testing apparatus, which will enable us to study other spatial behaviours such as direction-following as well as non-spatial tasks such as approaching a moving object.”
“These are exciting times in systems neuroscience. Recent developments in electrophysiological and optical recording techniques permit us to simultaneously monitor the activity of large numbers of single units, opening up numerous possibilities for correlating patterns of neural activity with mental phenomena such as thoughts, intentions and emotions.”
“In parallel, the development of optogenetic techniques for manipulating the activity of brain cells has made possible the demonstration of a causal relationship between these neural patterns and the associated mental activity. Complementary development has taken place in the area of behavioural technologies. The use of virtual reality in the head-fixed mouse has opened up the possibility of controlling behaviour in a limited domain of experience such as navigating in a virtual corridor or choosing a particular visual stimulus.”
Professor O’Keefe concluded:
“The resources of the Sainsbury Wellcome Centre and the UCL Biosciences mechanical workshop have enabled us to embark on a programme to develop more naturalistic, ethologically-relevant tasks where we can still monitor and control the animal’s behaviour.”

This article has been republished from materials provided by The Sainsbury Wellcome Centre for Neural Circuits and Behaviour. Note: material may have been edited for length and content. For further information, please contact the cited source.
Reference:
Wood, R. A., Bauza, M., Krupic, J., Burton, S., Delekate, A., Chan, D., & O'Keefe, J. (2018). The honeycomb maze provides a novel test to study hippocampal-dependent spatial navigation. Nature. doi:doi:10.1038/nature25433
Advertisement
Chosen for you
Application Note