Complete the form below and we will email you a PDF version of "Image-tracking technology allows scientists to observe nature vs. nurture in neural stem cells"

One of the longstanding debates in science, that has, perhaps unsurprisingly, permeated into the field of stem cell research, is the question of nature versus nurture influencing development. Science on stem cells thus far, has suggested that, as one side of the existential debate holds: their fate is not predestined. But new research from the Neural Stem Cell Institute and Drexel University's College of Engineering suggests that the cells’ tabula might not be as rasa as we have been led to believe.

In a paper published in the latest edition of Stem Cell Reports, researchers present voluminous video evidence to support their discovery of distinct, intrinsic differences among stem cells found in the brains of mice. Through time-lapse imaging of cells cultured in identical in vitro environments, researchers were able to identify differences in growth, movement and differentiation that exist between stem cells found in two different areas of the brain.

The cerebral cortex is the control center of the brain, concerned with thought, memory, and controlling our behavior. It is divided into areas with dedicated functions. The posterior or back of the cortex integrates visual stimuli from the eye and determines our responses by sending signals to the anterior—the front part that controls our movements. The visual cortex and the motor cortex are both layered structures, each containing millions of neurons networked into intricate circuits. During development as embryos, each of these parts of the cortex is created from neural stem and progenitor cells.

A key unanswered question in the study of neuroscience is whether the visual and motor cortex areas are produced by neural stem cells that are themselves unique and patterned to produce each area by cell-intrinsic programs, or whether the progenitor cells are essentially the same, but rely on environmental signals to carve out the unique cells and connections in each final cortex area. Understanding the mechanisms controlling stem cell production is not just important for understanding human development, but also for learning how to use stem cells for regenerative medicine and for formulating new cancer therapies.

To answer that question, Sally Temple, PhD, and her research group at the Neural Stem Cell Institute studied single neural stem cells from the anterior and posterior embryonic mouse cerebral cortex. They provided the cells with an identical environment in tissue culture, then made time-lapse movies of how they divided and differentiated into cortical cells.

“If the answer to the age-old question was, in fact, ‘nurture’ then these cells would behave the same, given the identical environments,” Temple said. “But if the answer was ‘nature’ then they would behave differently. And this is actually what we found—anterior and posterior stem cells are intrinsically quite different from each other.”

The anterior stem cells, which form the motor cortex, were observed to divide more slowly, and produce smaller clones in comparison to the stem cells derived from the posterior—which grow to form the visual cortex. This means that these cortical progenitor cells are different­—even at early stage of development—and these differences could help explain how areas of the cortex develop into specialized structures.

This discovery was made possible by a powerful set of biological tracking programs, developed in the Computational Image Sequence Analysis Lab led by Andrew Cohen, PhD, an associate professor in Drexel’s College of Engineering, that automated the process of analyzing tens of thousands of time-lapse images. The programs, called LEVER and CloneView, can track the growth, movement and proliferation of cells and use this information to visually enhance the time-lapse movies and produce an entire family tree—a lineage tree, in cell biology parlance—for each cell. 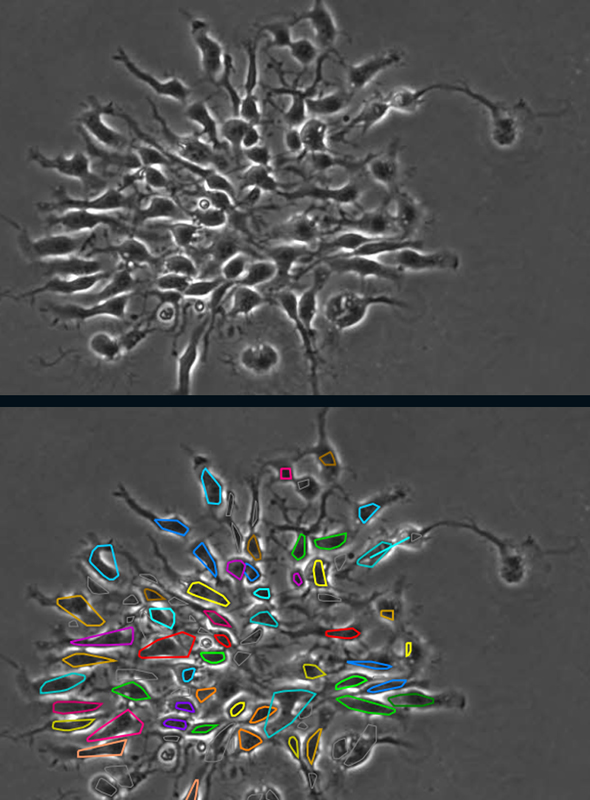 “The task was huge,” Temple said. “We needed to follow literally hundreds of neural stem cells by time-lapse microscopy, and identify every division and outcome of each of the progeny as they multiplied.”

LEVER, shortened from Lineage Editing and Validation, processes the raw images and, armed with basic knowledge about their size and shape, attempts to locate and tag the cells in each frame.

“Basically the algorithms look for groups of pixels that have the right appearance and that are in the right place to be the cells we’re tracking,” Cohen said. “From there we use other algorithms to cross-check the results multiple times, until we’re almost 99 percent sure that the things LEVER has identified in all these pictures are, in fact cells.”

With the cells and their corresponding appearance in each frame uniquely tagged, the CloneView program can tell researchers how fast the cells are moving and when they divide—noted by LEVER when there is an appearance of a previously untagged cell. This information is used to automatically generate a lineage tree for the cells, which in turn gives the program, and the researchers, another way to check for errors.

Displayed in CloneView, a time-lapse movie of a single stem cell is overlaid by a uniquely colored outline of its inner boundary. As it grows and eventually divides, new cells are delineated with a different color. Each of these colors corresponds to the cell’s node on the lineage tree, which is displayed in a separate frame next to the movie. This gives Cohen’s research assistants a quick way to check the video to make sure LEVER correctly identified the cells and their progeny.

Once checked by human eyes, the images are run through the program again for more precise delineation of the cells—this process is especially arduous when tracking stem cells because they often have long arm-like appendages called processes that can look like a separate cell.

“Human validation is a very important part of our process. We are still the most accurate judge of when cells have divided,” Cohen said. “By running the time-lapse images through the program we get an output video that’s easy to visually verify. As these corrections are made, the program can spot related errors and automatically fix those. The key is to minimize the amount of effort required from the humans.”

The team is already reporting error rates below two percent for most of the videos.

“Dealing with this much visual data means we can make some really accurate statements about the nature of these cells, but it also means that we need to be tremendously efficient about the way we handle the data to squeeze out that information,” said 10.1016/j.stemcr.2015.08.002, a doctoral candidate in Cohen’s lab and a co-author of the paper.

The end result of the algorithmic tagging, tracking and sorting is 160 individual time-lapse videos chronicling five days in the lives of neural stem cells. A mountain of data is distilled to a format from which researchers can more easily make observations and immediately test their theories against a formidable dataset. 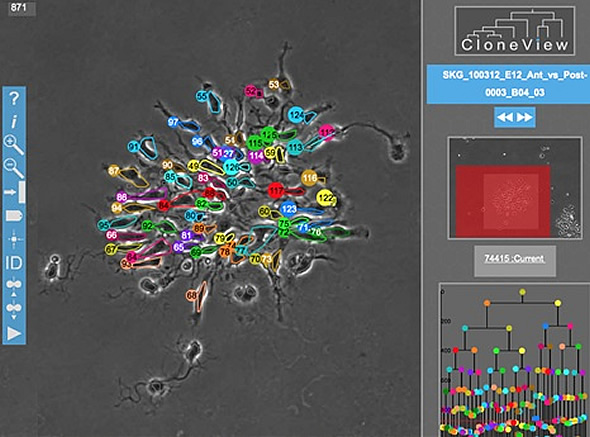 The CloneView program visually augments time-lapse microscopic videos with outlines of the cells as they move, grow and divide, while also recording each division on a lineage tree. Credit: Drexel

“That’s 160 videos displaying augmented visual data from images taken of each cell every five minutes for five days,” Cohen said. “That’s how you end up with a massive amount of data like the 350 gigabytes we were working with. And that’s why programs like this are really a powerful tools for microbiologists.”

So powerful, in fact, that according to Temple, discoveries of this magnitude are simply not possible without this sort of automated analysis of time-phase contrast images.

“When you’re working with imaging data on this scale there is a considerable bottleneck when it comes to analysis,” Temple said. “It might have been feasible to compare clone sizes manually, but to analyze their movement, life-cycle and track their lineage trees is so daunting, we wouldn’t have even considered undertaking this analysis without advanced processing programs like LEVER and CloneView. Not only can they handle massive volumes of data in a short period of time, they produce information that we can validate and trust. Discoveries like this must be built on a foundation of meticulously validated research.”

As part of the paper, Cohen and Temple are publishing all of their stem cell data in files that can be viewed online via CloneView. In addition, all of Cohen’s source code for LEVER and CloneView are free and available for download. This sort of open-access science is important to the researchers because they believe it will help to advance both the field of stem cell research, and the technology used to do it.

“The amazing thing about this is the sheer volume of data we’re making publicly available,” Cohen said. “It’s conceivable that many more interesting discoveries could come from our dataset thanks to CloneView or maybe a better program that someone comes up with using our source code as a start. Great things are possible through open-source collaboration.”

For example, Cohen solicited his colleague Uri Hershberg, PhD, an assistant professor and Herschberg’s doctoral student Justin Melunis, from Drexel’s School of Biomedical Engineering, Science and Health Systems, to be the first bioinformatics researchers to work with the stem cell data in CloneView. Their detailed characterization of motion, growth and size of clones as it varies across generations—which is also published in the paper—helped to pinpoint the differences between anterior and posterior cells.

“Since CloneView is online, the New York and Philadelphia teams could work on this unique dataset together, which helped accelerate the research,” Temple said. “The way these programs incorporate both automation and human validation gives us the best and most accurate information on which to base our conclusions.”

Cohen asserts that the strength of the programs is their use of automation and machine learning as a way to maximize the user’s interaction and enable thoughtful collaboration throughout the research process. CloneView is an open-source, web-based program so it’s now feasible for researchers around the world to have access to this dataset.

The next applications Cohen is planning for LEVER and CloneView include studying cancer cells and immune system cells. With new visual data, including additional imaging channels and layers of complexity, these programs will guide researchers toward new discoveries about the behaviors of healthy and diseased cells.