There is no rest for a baby's brain – not even in sleep. While infants sleep they are reprocessing what they have learned. Working with researchers from the University of Tübingen, scientists from the Max Planck Institute (MPI) for Human Cognitive and Brain Sciences in Leipzig have discovered that babies of the age from 9 to 16 months remember the names of objects better if they had a short nap. And only after sleeping can they transfer learned names to similar new objects. The infant brain thus forms general categories during sleep, converting experience into knowledge. The researchers also showed that the formation of categories is closely related to a typical rhythmic activity of the sleeping brain called sleep spindles: Infants with high sleep spindle activity are particularly good at generalizing their experiences and developing new knowledge while sleeping.

Sleep means much more than just relaxation for our brain. The flow of information from the sensory organs is largely cut off while we sleep, but many regions of the brain are especially active. Most brain researchers today believe that the sleeping brain retrieves recent experiences, thereby consolidating new knowledge and integrating it into the existing memory by strengthening, re-linking or even dismantling neuronal connections. This means that sleep is indispensable for memory.

The Max Planck researchers have found this to be the case even in infants and toddlers. In order to study the impact of sleep on infant memory, they invited parents to attend a study with their 9- to 16-month-old children. During the training session, the infants were repeatedly shown images of certain objects while hearing the fictitious names assigned to the objects. Some objects were similar to each other, varying only in their proportions, colours or in certain details. The similar objects, which belonged to the same category according to their shapes, were always given the same names. During this process, the researchers recorded the infants' brain activity using electroencephalography (EEG). 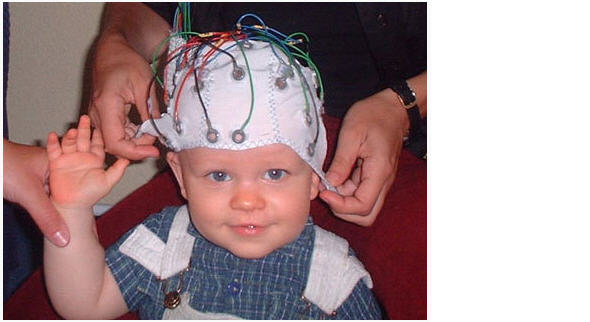 Electrodes on the surface of the head in the cap register electrical signals emanating from the nerve cells and transmit them to the measuring instruments. Credit: © MPI f. Human Cognitive and Brain Sciences / Ch. Rügen

One group of infants spent the next one to two hours sleeping in their prams while an electroencephalogram (EEG) was recorded, while the others remained awake, going for a walk in their prams or playing in the examination room. In the subsequent testing session, the researchers again presented the infants with picture-word pairs - this time both in the same combinations as in the learning session and in new combinations - and again measured their brain activity while doing so.

During the subsequent testing session, the brain activity of the infants who had slept after the training session was markedly different from that of the group who had stayed awake. While the group who had stayed awake had forgotten the names of the individual objects, the children in the sleep group remembered the object-word mappings. There were also radical differences in their abilities to categorize the objects. "The infants who slept after the training session assigned new objects to the names of similar-looking objects", says Manuela Friedrich of the Max Planck Institute for Human Cognitive and Brain Sciences. "They were not able to do that before their nap, and nor were the ones who stayed awake able to do it. This means that the categories must have been formed during sleep."

Babies learn what a "Wapel" is without sleep. The infant brain, however, only recognized which items could be assigned to the category "Bofel" after a short nap. Credit: © MPI f. Human Cognitive and Brain Sciences / K. Flake

While the children's age had no effect, a particular type of brainwave called the sleep spindle has a significant impact on learning outcomes. Sleep spindles occur when nerve bundles between the thalamus and the cerebral cortex generates rhythmic activity of 10 to 15 cycles per second. They are known to influence memory consolidation in adults. "The greater an infant’s spindle activity, the better it can assign category names to new objects after sleep", explains Friedrich.

These results show that sleep significantly affects memory organization even in the infant brain - and at a time when memory is growing on a massive scale. "The waking infant brain quickly forgets newly learned names, but during sleep, words are more durably linked to objects and imprinted", says Angela Friederici, Director at the Leipzig-based Max Planck Institute and head of the study.

Sleep and sleep spindles also enable the infant brain to pool similar meanings. Apparently, when the brain is largely cut off from outside influences, it can organize its experiences and form new generalizations. "In this way, sleep bridges the gap between specific objects and general categories, thus transferring experience into knowledge", explains Friederici.