News
Published: January 27, 2017
| Original Story By Bob Marcotte of the University of Rochford

For the past several years, Jessica Cantlon has been working to understand how humans develop the concept of numbers, from simple counting to complex mathematical reasoning. Early in her career at the University of Rochester, the assistant professor of brain and cognitive sciences began studying primates in her search for the origins of numeric understanding.

In 2013, she, PhD candidate Steve Ferrigno, and colleagues at Rochester and the Seneca Park Zoo made a surprising discovery: in an experiment using varying quantities of peanuts, baboons (even as young as one year of age) clearly showed an ability to distinguish between large and small quantities of objects.

But the finding raised another question. To what extent might that ability be influenced by other dimensions of those objects—such as their relative surface area—in addition to their number?

This month Cantlon, Ferrigno, and two additional coauthors—Steven Piantadosi, an assistant professor of brain and cognitive sciences at Rochester, and Julian Jara-Ettinger, a postdoctoral researcher in brain and cognitive sciences at MIT—are publishing the results of a new study suggesting that primates do, in fact, have the ability to distinguish large and small quantities of objects, irrespective of the surface area they appear to occupy.

Study subjects included rhesus monkeys, young children and adults in the United States, and adult members of the Tsimane', a predominately “low numeracy” cultural group that inhabits an area of remote rain forest in Bolivia.

Study subjects included rhesus monkeys, young children and adults in the United States, and adult members of the Tsimane’, a predominately “low numeracy” cultural group that inhabits an area of remote rain forest in Bolivia.

Study subjects included both humans and primates: adults and children in the United States; adults of the Tsimane’, a predominately “low numeracy” cultural group that inhabits an area of remote rainforest in Bolivia, and that has been long studied by Piantadosi and Jara-Ettinger; and rhesus monkeys, a species with strong neural and cognitive similarities to humans.

The researchers found that all groups showed a bias toward numbers over surface area in their estimations.

“This shows that the spontaneous aspect of extracting numerical information likely has an evolutionary basis, because this has been seen across all humans and also with other primate species,” said Ferrigno.

The study also showed that the bias toward the numerical dimension was strongest in humans compared to primates, and was correlated with increasing age and math education in humans.

The study, published in Nature Communications, is an exciting development for anyone interested in improving early math education. Because the testing process was nonverbal, it could be especially useful in assessing math abilities in young children. “It’s very hard to test young children at age four on their math abilities because it’s hard to differentiate what they know, and what they know, but just can’t express,” Ferrigno said. “With further refinements, this type of numerical bias test could in the future be an indicator of how they are progressing in their education.”

The study is the first to compare number perception with a single task performed across a diverse testing population. 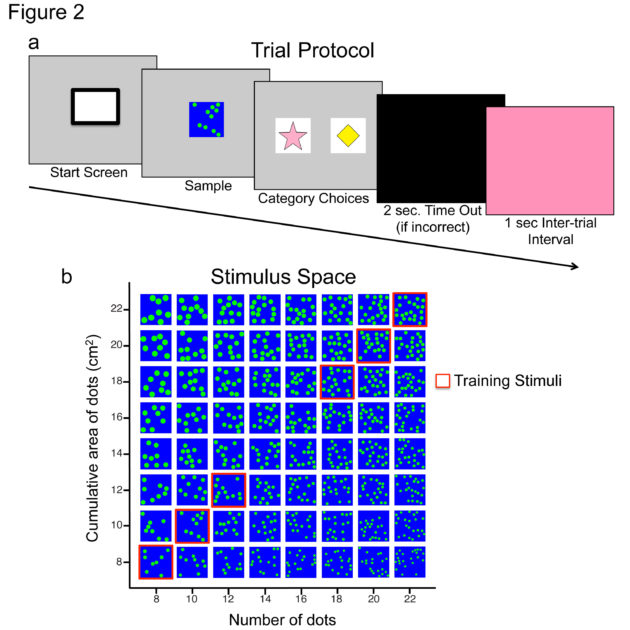 This illustration from the study shows the images subjects were presented with at top. Each sample they viewed, for example, was a dot array, followed by two icons for categorizing the array as little (star) or a lot (diamond). At bottom is a sampling of dot arrays that were used, varying in number of dots and the percentage of surface area they occupied.

To test the relative importance of numerical quantities versus surface area, researchers presented subjects with dot arrays, varying in both the number of dots and the relative surface area they occupied. For each array the subjects then selected one of two icons to categorize the array as a large or small quantity.

To keep the task the same across groups, no verbal description of the categories was provided; instead, subjects learned from nonverbal demonstration by the experimenters, and trial and error feedback.

The tests with primates and children and adults in the United States were conducted with touch screen monitors; Tsimane’ adults, who have limited exposure to such devices, were tested with laminated printouts.

Cantlon says the study shows “that the initial step toward becoming mathematically sophisticated likely had to do with focusing in on the number of objects, not just total mass or size.” In a broader sense, she adds, it shows “how humans got to be the way they are.

“This is about understanding human origins and how humans evolved thought processes that are mathematically sophisticated.”

This article has been republished from materials provided by University of Rochester. Note: material may have been edited for length and content. For further information, please contact the cited source.