Instinctive Defensive Behavior is Not Simply a Reflex

Scientists from the Sainsbury Wellcome Centre for Neural Circuits and Behaviour have debunked the myth that the instinct to flee from a threat is not just a reflex, but a series of complex computational processes. In a paper published in Current Biology, the team have found that instinctive behaviour is not innate but requires learning and memory.

Tiago Branco, Group Leader at the SWC said, “Our research questions the myth that instinctive behaviour, such as the fight-or-flight response to threat, is a reflex. Instead it is a series of computational steps that make use of cognitive maps and memory, which are processed very rapidly by the brain”.

Scientists observed that when a mouse is threatened, it will move to seek safety, even if that involves getting closer to the threat. To do this, the researchers placed mice in a novel environment and allowed them time to find a shelter, after which they presented artificial stimuli that mimic predators in different locations. They found they mice always escaped very quickly to the shelter, regardless of where the predator threat was, even in complete darkness and when the visual cues in the environment were rotated, which showed that mice do not use vision to find where the shelter is, but instead rely on memory of its location to find it. 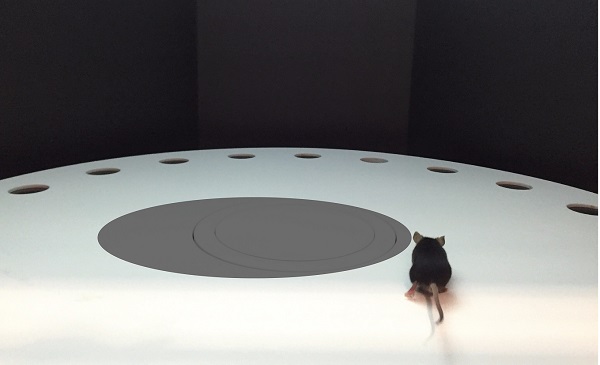 The researchers then investigated how the memory of the shelter location is formed and updated, by giving the mice different amounts of time to explore new environments and by moving the shelter to new locations. They found that mice memorise the shelter location surprisingly fast (~15 seconds), and that they also update their knowledge of where safety is very quickly, typically after a few minutes of exploration. In addition, when the shelter was removed altogether, mice changed their defensive strategy and froze instead. This avoids potential detection by a predator, and allows mice to gather further information during this time, possibly using visual cues, to work out what best to do next.  Overall, these experiments show that instinctive defensive behaviours are extremely flexible, and uses very fast learning processes. Lead author and PhD student Ruben Vale said, “Instinctive defensive behaviour turns out to be very complex, and relies on the fast formation of a memory that is used to guide actions”.

This research could help understand how people make decisions, and could be applied to improve mental health as, for example, it could provide a better understanding of how depressed people make the wrong decisions. “Patients with depression have a neurochemical imbalance and this affects their decision making process. Understanding decision-making processes in general, such as when to escape from a threatening situation, could help with understanding maladaptive decision making during depression, and because depression can be reversible, it is amenable to intervention, “said Tiago Branco.

“It is important for us to build on these findings and understand how mice interpret what is threatening behaviour and what is not. We are also interested to find out where in the brain does the memory of the shelter form, and how is it used to choose between freezing or fleeing from danger,” Branco added.

This article has been republished from materials provided by the Sainsbury Wellcome Centre for Neural Circuits and Behaviour. Note: material may have been edited for length and content. For further information, please contact the cited source.